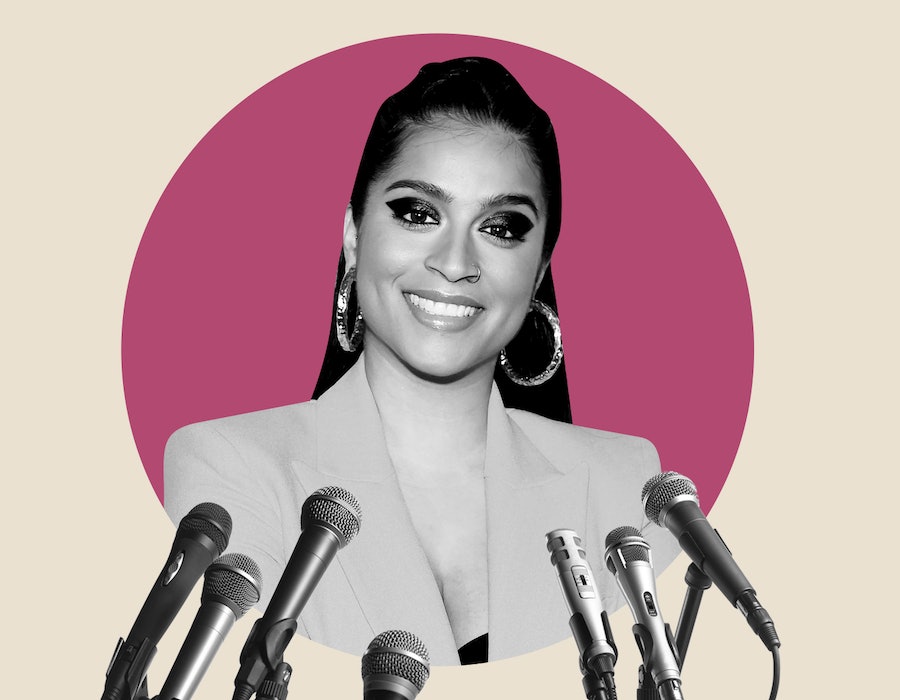 In Bustle's Quick Question, we ask women leaders all about advice. Here, late-night host Lilly Singh tells Bustle about the business advice she'd give her younger self, how she recharges, and the honest advice Trevor Noah gave her.

Lilly Singh's 2020 has been non-stop. Between completing a 97-episode run of her late-night talk show, A Little Late With Lilly Singh, working on a sketch-comedy series called Sketchy Times with Lilly Singh, and working on content for her company, Unicorn Island Productions, she admits that she sometimes forgets to check in with herself when she's busy.

"If you asked what my favorite episode of season one of my late-night show was, I would struggle to answer that because I may not remember," says Singh, who's the first person of Indian and South Asian descent and first openly bisexual woman to host a late-night show on a major network. "During season two, I’m going to make sure that I remember and that it’s more than me just going through the motions. I’m going to give myself that gift."

In 2013, Singh rose to fame on YouTube — where she has 15 million subscribers — through comedy sketches. As Singh transitioned to Hollywood, she tapped Trevor Noah for advice. "[As humans], we love to ask people for advice, but we need to think about who we're getting advice from," says Singh, who's partnering with Lightlife for their Make A Clean Break campaign, where she'll dish out comedic advice around breaking bad habits.

"[Trevor] was the only person who told me, 'Don't fool yourself into thinking that [A Little Late With Lilly Singh] is not going to consume your life because it will ... and you should just embrace that," Singh tells Bustle, adding that it's the best advice she's ever received.

Below, Singh shares her pre-show rituals, how she unwinds, and the advice she refutes.

What’s the biggest hurdle you faced when you launched Unicorn Island Productions?

LS: With YouTube, I came from a world where I am the writer, director, on-screen talent, and producer. Developing products in a more traditional space is a very complex process that takes a long time and involves different players, so the learning curve was very steep. Being the dumbest in the room all the time and asking all the dumb questions until I wasn't the dumbest was the hardest part.

How do you pump yourself up before your late-night show?

LS: I need at least five to 10 minutes of alone time to meditate. I always bring myself back to the reason why I'm doing what I do, because it's so easy to lose your thoughts in the expectations of the network, the marks you have to hit onstage, and the questions you have to ask your guests. I always try to ground myself in 1), it's supposed to be fun and 2), it's not supposed to be perfect. Once I’m calm, I rile myself up. I stretch, jump up and down, act fearless, beat my chest, and dance a little bit. As soon as I leave my room or office, I pretend like I'm onstage so that I can turn it on when it's time to go.

How do you unwind after a long day of filming?

LS: My definition of winding down is lighting a candle, lying down horizontally, and asking myself, "How are you doing? What did you think about that? Did you enjoy that? What did you not enjoy? What have you learned?" Having that alone time forces me to stay present.

"I'm content with every decision I've made because they were either good decisions that resulted in good things, or they were bad ones that taught me a crucial lesson, so I wouldn't do anything differently."

LS: I'm sometimes encouraged to behave in ways that I don't think are acceptable. Someone might have gotten my order wrong and a person on my team will say, “You're the star of the set! Demand X-Y-Z, or make a big deal about this.” I understand that I need certain things in order to function and work, but I also am still a human. And I understand other people are still human, so I never want to behave in a way that I don't think is right no matter what number I am on the call sheet.

What business advice would you give your younger self?

LS: Don't call yourself Superwoman because it's a copyrighted name. Honestly though, I'm content with every decision I've made because they were either good decisions that resulted in good things, or they were bad ones that taught me a crucial lesson, so I wouldn't do anything differently. I would make all the same mistakes and take all the same risks.