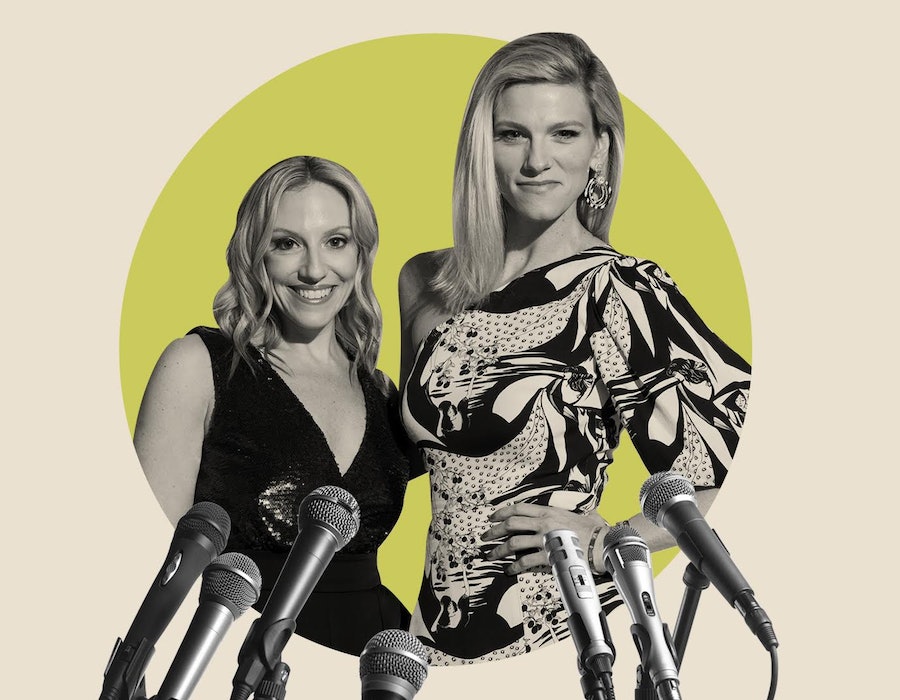 In Bustle’s Quick Question, we ask women leaders all about advice — from the best guidance they’ve ever gotten to what they’re still figuring out. Here, best friends and co-founders of Women Work F*cking Hard, Kristin O'Keeffe Merrick and Lindsay Shookus, reflect on spiraling, inexplicable rage, and how they pick each other back up.

Earlier this month, best friends and co-founders Kristin O'Keeffe Merrick and Lindsay Shookus got into a massive fight. The pair rarely have it out — by their estimation they’ve fought about five times in their nearly 25 years of friendship — but when they do, they don’t shy away from it. “We have enough therapy and emotional maturity now to call each other out when we're feeling hurt. Most people don't communicate that way with their friends, but we do,” money expert O'Keeffe Merrick tells Bustle. And Shookus, who’s a talent producer at Saturday Night Live, is quick to agree: “Women feel like they have to maintain a certain amount of poise and [pretend] everything's fine. But you get a deeper friendship when you can actually be honest about those kinds of things.”

Exposing these thorny, fraught corners of female friendship is the lifeblood of O'Keeffe Merrick and Shookus’ joint venture: Women Work F*cking Hard. After meeting at University of North Carolina at Chapel Hill, the pair moved to New York to pursue their respective careers. Shookus first started working at SNL in 2002; O'Keeffe Merrick took her talents to Wall Street. After two decades of supporting each other’s ambitions, they launched WWFH — a networking event where they spotlight female entrepreneurs and offer women the hard-fought wisdom they’ve acquired from having had a front row seat to each other’s careers.

The goal for a post-COVID world is to expand these efforts beyond New York. “I'd like to bring it to 10 different cities in the next year. Our biggest thing is that you don't have to be rich to help each other,” says Shookus. “So this grassroots effort of getting it into different cities, [will be all about] helping the woman next to you.” That and they’re also just really ready to start partying again. “People were like, ‘What did you miss most during COVID?’ And I'm like, ‘I missed going to parties!’ It fills me in a way that nothing really else does,” says O'Keeffe Merrick.

You two have been best friends since college. How did you support one another when you were first transitioning out of college life, and into your careers?

Lindsay Shookus: Having two separate, totally different careers, our hours were completely different. Kristin was going to work at like 6:00 AM and there were days I was getting home at 5:00 AM. But we prioritized the friendship. Even in the darkest of days, we always found time to call [each other’s] office. People in my office would recognize Kristin's phone number calling in. [They’d say], "That's Kristin, Lindsay."

Something that speaks to our friendship is that we’ve always complemented each other. My skill set that I'm great at, that made me pursue my career, and the skill set that made Kristen so good at her career, is very different. If we were doing the exact same thing then it wouldn't click the way it does. We were always able to give each other a different perspective based on the fact that we really weren't involved in each other’s career paths.

Kristin O’Keeffe Merrick: I think we also both have a pretty good sense of humor. We can, at the worst times, make each other laugh. And that helps.

A cornerstone of your friendship is that you two will always give it to each other straight. What’s your advice for people who feel the need to “sugarcoat” things to their friends?

Shookus: Kristin is the queen of giving unsolicited advice...

O’Keeffe Merrick: I have a really, really hard time with people who aren't just honest and real. I think one of the things about the last 18 months is it's been so difficult for everyone for different reasons. And it doesn't do anyone good to pretend that you're doing great. I avoid people who aren't honest with me and down to earth and immediately forthcoming.

Lindsay, how have you benefited from having that influence in your life?

Shookus: [I’m drawn to it] like a moth to a flame. It brings me in when someone’s authentic and can tell the truth. You can even tie it back to our vision for Women Work F*cking Hard. You're not helping the woman next to you if you're not being honest. [You have to] say the hard thing and tell the truth, even when you know your friends don't want to hear it.

That's the hard stuff but that's also how we bond and bring each other up. I think a lot of women don't do that. That's kind of a thing we try to be an example for because having Kris push me out of my comfort zone has really helped.

Both of you are at the height of your careers, have young children, and now run WWFH on top of it. How do you even attempt to balance all of that?

Shookus: There are days where we’re crumbling as individuals. There will be times where I'll call Kris up and be like, "Hey, I'm in a really bad place. Are you in a bad place? Because if you’re in a bad place we can not talk." (We're aware that if we're both in a spiral, it's not a great combo.) But we are really instrumental in getting each other through these challenging times probably more than anyone else in our lives.

O’Keeffe Merrick: It’s about knowing your limits. This is something that we're both not great at, but I think we're getting better at. Recognizing when there's just too much on our plates. I think that that's just a maturity thing and it's a mental health thing. It's also a self-care thing.

What do your daily to-do lists typically look like?

Shookus: So much of my life in production [at Saturday Night Live] is problem-solving. I’m waking up and being like, "What fire will I put out today?" Like, "Have I talked to the host today? What time is the musical guest coming in?" Then it’s like, “Do I have a booking hole that's for three weeks from now? How am I going to solve that? Who are my options?” It's a totally different beast when I'm in production, because there's always something going slightly wrong.

O’Keeffe Merrick: The funny thing about Linds’ life, production-wise, is that it's basically increments of six days. So it's just, "How are we going to get through this next six days? Or five days? Or three days?" And sometimes I'll be like, girl, you'll be done in 12 hours. 12 more hours.

Shookus: I have this thing with my office where even when it's a bad week, or you're dealing with a lot of egos or whatever it is, my thing is always like, “Sunday always comes.” Another one starts again and you have to say goodbye to those problems and then say hello to the new stuff. And it's kind of like rebirth. You have another chance at doing something new. So it's nice to have that because the show is live. You can't change it. It happened.

Do either of you have any major career regrets? And if so, what have you learned from them?

O’Keeffe Merrick: In my earlier career, my biggest impediment to success was the voice in my head. What I called my mental goalie. That voice that was like, "Don't be so annoying, Kristin." I think it kept me from excelling in a way that I would have liked to see myself on Wall Street. I've also just started to realize that not everyone needs to be a client of mine. There are people who are going to be great for me, and there are going to be people who aren't great for me. That took me a really, really long time to understand and I think that mental goalie got in my way far too often.

Shookus: I've been with SNL since I started [working] so my career path has been pretty straightforward and full of a lot of blessings. But I'd say one of the things that I learned the hard way is that entertainment can be really tricky. Like catty and gossipy. I thought I had to play that game in my twenties. I remember like giving some piece of gossip to someone above me when I was like 26. Nothing even harmful, but I woke up the next day feeling so bad about myself. It took some growing pains to realize that there are lots of ways to be successful in entertainment and you don't have to sell your soul to the devil to be able to do it, you know?

More like this
How This Founder Turned Her Antidote To Doomscrolling Into A Business
By Anna Scott
How this Founder Inspired a New Wave of Drinking
By Jordan Murray
Your Daily Horoscope For August 17, 2022
By Alexandria Lettman
How To Turn WhatsApp Read Receipts Off
By Emma Carey
Get Even More From Bustle — Sign Up For The Newsletter