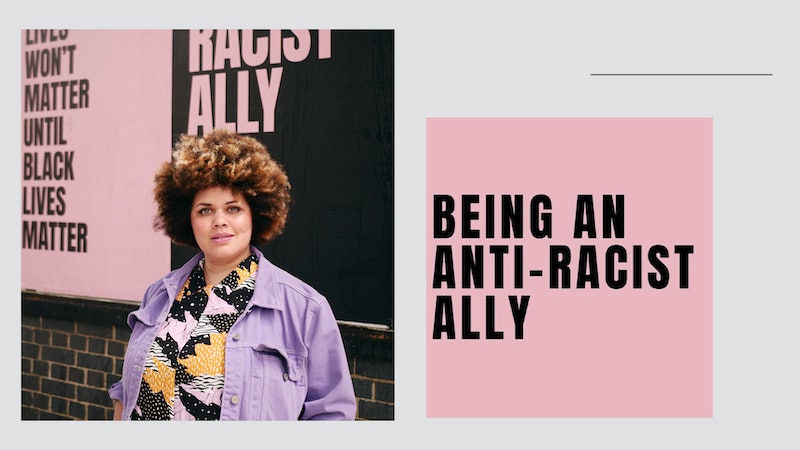 I didn’t think things went viral any more. When I think about viral content, I think of cats poking their faces through slices of bread, or being surprised by bananas, or grumpy cats. I guess what I’m saying is: I think of cats. What I don’t think of is educational tools about anti-racism and allyship. But when my post reached more than 10,000 people in just a few hours, I realised I was wrong.

The day after the news of George Floyd’s murder made headlines and filled timelines around the world, I put up a post on my Instagram account, talking about anti-racism and allyship: what it is, why it matters, how to do it. Pretty top-line stuff, but punchy, honest, and uncompromising. A call to action. At the time, I had under 1,000 followers. What happened next is still a blur...

My few hundred followers became a few thousand, and as the piece was shared all over Instagram (including by Justin Bieber), I watched the likes and shares grow and grow. Today, a little over three weeks after sharing that post, it has 71,000 likes and counting, and I have 155,000 followers. To say I was overwhelmed by the level of interest and engagement with my message would be a huge understatement. The truth is, I was in deep shock. I couldn’t believe that people were finally ready to take this message – one that has been at the core of my work for years and years – seriously.

I couldn’t believe that people were finally ready to take this message – one that has been at the core of my work for years and years – seriously.

I decided that, if this was the moment, if this was the one time that the conversation was going to take hold in the hearts and minds of non-Black people and galvanise them into action, I had to do everything I could to seize the opportunity and make real change.

The result? I didn’t sleep more than three hours a night for two weeks. My thoughts were busy and muddled as I tried to respond to every message, comment, and reshare to keep the momentum going. Then I learned that Instagram has a daily interactions limit and I got temporarily blocked. In some ways, it was a blessing in disguise – I needed a break.

In the weeks since, I have continued making new posts and started using my stories to encourage people to share the Allyship Actions that they had taken that week, the things that they had done to be actively anti-racist in their own lives during the past seven days. Each time I put up a story asking “What have you done this week to be actively anti-racist?” there’s a knot in my stomach; maybe this will be the week everyone has moved on, and the responses will start to dry up. I refresh the responses page, waiting to see them begin to trickle in.

I didn’t sleep more than three hours a night for two weeks. My thoughts were busy and muddled as I tried to respond to every message, comment, and reshare to keep the momentum going.

But so far at least, my fears have been for nothing. The trickle becomes a flood as thousands of people send me messages about the protests they’ve gone to, the standing orders they’ve set up for donations, the letters they’ve written to their libraries demanding greater representation in their selections of books, the chats they’ve had with their families and the contact they’ve had with MPs. I share some responses to my story, and then there’s another wave of people messaging their thanks. “This is so great to see,” they say. “It’s given me so many ideas for things that I can do next week.”

It’s these people and their responses that make me hopeful. They’re turning one-off actions into habits, they’re getting uncomfortable and holding one another accountable in ways that I have never seen before. It’s truly amazing.

But on top of the shock, the exhaustion, and the hope, there’s another feeling that keeps creeping in, popping its head up in the middle of the night. Guilt.

On top of the shock, the exhaustion, and the hope, there’s another feeling that keeps creeping in. Guilt.

I’ve been doing this work for years. I’ve been talking and protesting and making a fuss, putting my body, relationships, and livelihood in harm’s way for something that I believe passionately in. I’ve left jobs, lost jobs, alienated friends and got into heated public discussions, and suddenly, after all of that, the very thing I wanted to happen has happened. People are starting to say “I understand. I stand with you. Enough is enough.” But at what cost?

I was trying to make change, but my success in that, and the world’s introduction to my work, is because we had all watched another Black man die in the street. I feel guilty because I wonder if I’m benefitting from Geroge Floyd’s public death?

The day that I learned of George Floyd’s murder, I didn’t feel like I could cope any more. My timeline was flooded with the same photo of a white police officer kneeling on his neck, an image that I can now clearly conjure up in my mind at any time, whether I want to or not. I still haven’t watched the video, and I don’t think I ever will. I’ve been told that he calls out for his mum, that he says he can’t breathe, that he realises they’re going to kill him, but knows there’s nothing he can do. It was more than I felt like I could bare in a moment where we were already reeling from the murder of Breonna Taylor, the daylight lynching of Ahmaud Arbery and the knowledge that Belly Mujinga had died after someone who claimed to have coronavirus spat in her face. The deadly results of systemic racism, firmly in mind. I spent the day crying. Big, shuddery sobs muffled by the pillow I clung to in the bathroom in a bid to not disturb my partner's conference calls next door.

The very thing I wanted to happen has happened. People are starting to say “I understand. I stand with you. Enough is enough.” But at what cost?

This whole thing has been a whirlwind. I didn’t expect it, not for a moment. But if the people who message me are telling the truth; if the work I’ve made has really helped to explain things to them in ways they hadn’t considered before; if they are protesting, and lobbying, and donating, and having the hard but necessary conversations in their own lives; if they’re really making long-term, conscious, sustainable change, then I’m glad to have played a part. I just wish it had been in different circumstances.

Sophie's book Millennial Black, out April 2021, provides a roadmap for young Black womxn in the workplace, offering actionable steps to succeed in what can often be hostile environments. You can pre-order Millennial Black here.