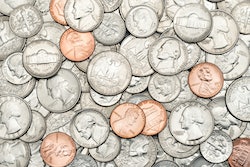 Alongside toilet paper, soap, and hand sanitizer, another household item is seeing a shortage in supply: coins. Yes, there is currently a coin shortage related to the coronavirus pandemic, and it’s impacting banks and businesses alike. Lest you think the coin shortage a hoax or at least an over-exaggeration, experts have confirmed the U.S. is currently experiencing a shortage of coins in circulation among supply chains.

In fact, the coin storage has lead one Wisconsin bank to running a coin buyback program. Until Tuesday, July 21, Community State Bank (CSB) was offering a bonus $5 for every $100 worth of coins customers turned in to any of its seven locations in the state. Regardless of whether they were a bank customer or not, anyone could bring in coins to exchange, receiving up to a maximum coin bonus of $500. (The month-long program ended once CSB reached its buyback goal.) When asked their two cents — pun absolutely intended — Eloissa Heigl, Marketing Communications Coordinate for CSB, tells Bustle that the current coin shortage is definitely a result of the pandemic.

“Local banks and credit unions have had their lobbies closed since the middle of March. Local businesses were shut down for a long period of time and families who normally save up change for a vacation or special event, simply aren’t using it,” Heigl says. Additionally, banks get their supply of coins from the Federal Reserve, which had locations in Minneapolis and Chicago temporarily closed, according to the Heigl. “The issue is two-fold, availability from the Fed, and circulation,” Heigl continues. "People are not using their change right now and that leads to an issue for businesses big or small.

How Did The Coin Shortage Happen?

The economic slowdown has impacted the coin supply at every business level. “What’s happened is that, with the partial closure of the economy, the flow of coins through the economy has gotten all — it's kind of stopped," Federal Reserve chairman Jerome Powell said during a virtual hearing with the House Financial Services Committee on Wednesday, June 17.

During the hearing, Tennessee Rep. John Rose told Powell that banks in his district had been notified by the Federal Reserve they'd receive a significantly small portion of their weekly coin order. Additionally, Rose said the banks told him they’d likely run out of coins by the end of the week or necessitate rounding up or down should they run low.

The Federal Reserve even created a temporary U.S. Coin “task force” to address the shortage. “Although the Federal Reserve is confident that the coin inventory issues will resolve once the economy opens more broadly and the coin supply chain returns to normal circulation patterns,” a June 11 press release regarding the newly formed task force stated. "We recognize that these measures alone will not be enough to resolve near-term issues.”

There’s an estimated $47.8 billion of coins in current circulation, a June 30 press release from the Federal Reserve confirms. That’s up over $400 million from last year’s $47.4 billion over the same time period. In other words, there are millions of dollars worth of coins sitting in people’s pockets, couch cushions, rainy day piggy banks, that would otherwise be spent restaurants, laundromats, and other businesses.

Who Does The Coin Shortage Impact?

Some see the coin shortage as another opportunity to encourage killing the penny. Pennies are surprisingly expensive to make, costing two cents per every one-cent coin made, as reported by NPR. Meaning, the millions of dollars it takes to produce the yearly supply of pennies is double the value of those pennies produced. Plus, pennies often seen as disposable, given their low value and how easy it is to misplace a penny. However, that disposableness adds up, with the U.S. Mint losing over $72 million worth of pennies in 2019, according to NPR.

As far as how you individually might be impacted by the coin shortage, the changes will likely be more subtle. CSB's Heigl says individuals who will be hit the hardest are small business owners. “If a local business is unable to obtain the necessary coin to run their business, they simply aren’t able to provide their customers with exact change,” Heigl tells Bustle. “In the end, the business and the customer who prefers to pay with cash are being affected.”

So, is there anything you can to do help? Participating in bank buyback programs is a good start. “There are solutions to these issues if we come together and think outside of the box,” Heigl says, confirming that their program was a success. After only being able to fulfill 10% of coin orders at the beginning of the shortage, CSB was able to full fill 100% of orders until the end of the year after running their program for just one week. “Over 17 tons of coin came in through the program.”

If nothing else, it's a reminder that the little things — yes, even pennies — add up.

More like this
Gemma Collins' Net Worth Is Only Going Up
By Catharina Cheung
What Is Brad Pitt’s Net Worth? The Bullet Train Star Now Makes 8 Figures Per Film
By Hugh McIntyre
What Is Beyoncé's Net Worth? The 'Renaissance' Hitmaker Makes 9 Figures On Tours
By Radhika Menon
Leaving Corrie Helped Michelle Keegan Make Her Millions
By Maxine Harrison
Get Even More From Bustle — Sign Up For The Newsletter