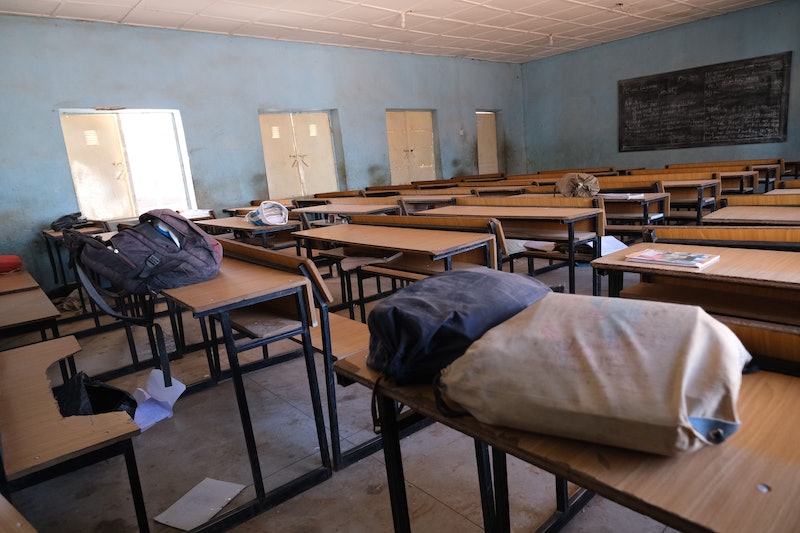 Six years after the abduction of over 250 schoolgirls from northeastern Chibok ignited a global #BringBackOurGirls campaign, Nigeria is reeling again from a mass kidnapping, this time of more than 500 schoolboys. Roughly 333 children are still missing from the state of Katsina in the north west of the country, sparking a new #BringBackOurBoys campaign on Twitter after their secondary school was attacked by gunmen last week.

What Happened In Katsina, Nigeria?

Witnesses said the attackers stormed the boarding school on motorbikes, opening fire at security forces. The ensuing battle forced hundreds of students to flee, with many jumping the school fence and hiding in the surrounding forest.

The few that escaped said that the students had been tracked in the forest and rounded up by the gunmen, before they were marched further into the forest by the armed men.

Families anxiously await updates from authorities regarding the missing children, and fear that “time is running out” for the boys.

Who Are Boko Haram?

The Islamist militant group Boko Haram – which has claimed responsibility for the attack in a video, according to SITE Intelligence Group – has previously targeted schools because of its opposition to Western education, which it believes corrupts the values of Muslims.

Dozens of girls from Chibok, in northern Borno state, are still missing six years after they were abducted by the jihadist group in 2014, and families fear the same could happen for the latest group of missing school children.

Boko Haram, whose name translates as "Western education is forbidden," and its offshoot, Islamic State West Africa Province, kidnapped the schoolboys as it believes “Western education is un-Islamic”, said the rebels’ leader Abubakar Shekau in a video claiming responsibility for the attack.

The group has waged a decade-long insurgency in northern Nigeria aimed at creating states based on their extreme interpretation of Sharia law.

What Is Happening Now?

As of December 17, 333 schoolboys from the boarding school are still missing and assumed captive, according to local officials. Nigerian authorities say they have been in contact with the kidnappers, but there are no details of the discussions. “Talks are ongoing to ensure [the pupils'] safety and return to their respective families,” said the governor of Katsina state, Aminu Bello Masari, on Twitter late on Monday.

Families are holding onto hope as the Katsina State governor said that 17 boys have been rescued since the attack that initially saw more than 500 students missing. It's reported that 15 were rescued by the military, another by police and one boy was found roaming in the forest and brought in by residents.

Security forces combed the Rugu forest – which stretches across Katsina, Zamfara, Kaduna and Niger states – in search of the boys on Wednesday (Dec.16). Defence Minister Major General Bashir Salihi-Magash said the military will pursue the attackers and rescue the students without concern about collateral damage. “We will go the whole hog,” Salihi-Magash added. “We have the intelligence, the information where they are and their movement and their method of operation.”

The attack has raised fears for the safety of other schools in the region. States in northern Nigeria have joined Katsina in ordering all schools to close following the kidnapping, including Kano, Kaduna, Zamfara and Jigawa. The Nigerian Union of Teachers has called on the government to improve security for students and teachers, threatening a nationwide strike unless the situation urgently improves.

What You Can Do To Help?