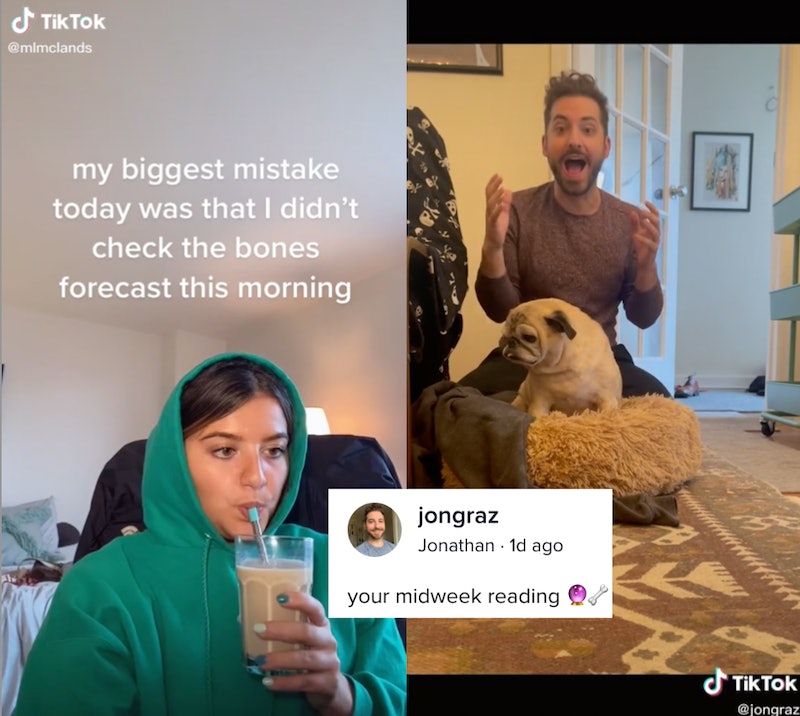 Every few days for the last few weeks, TikToker Jonathan Graziano has been playing a game with Noodle, his 13-year-old pug. The game is simple: He lifts the senior dog off his bed to find out if Noodle woke up with bones or no bones. Waking up with bones — meaning, the pug stands up on his own — suggests it’s going to be a good day. “Treat yourself today! Get that extra guac! Buy a jet-ski!” Graziano says on Oct. 8, a bones day. But on a no bones day, like Oct. 10, Noodle flops over, unable (or unwilling) to stay upright. No bones means “You have permission to flop today, whatever that means to you,” says Graziano in the post.

Other people are running with bones or no bones days on TikTok as a kind of horoscope predicting what the vibe for the day is going to be. Videos with the hashtag #nobones have over 30 million views. “Now why on earth is my medical school interview on a no bones day,” one user lamented. Another video boldly proclaims that the poster’s biggest mistake that day was “that I didn’t check the bones forecast this morning.” (One assumes, based on the melancholy soundtrack, that it was a no bones day.) “I can’t tell you how thrilled I am that [Noodle’s] body has become a harbinger of our collective truth,” Graziano said in the Oct. 8 bones day video.

Graziano, a 30-year-old in New York City who works in social media marketing, tells Bustle that he is “overwhelmed” with the attention he and Noodle have been getting. (When we talk, it’s a no bones day.) He adopted Noodle when the pug was seven and a half years old, and quickly figured out that the dog would very happily sleep in forever. “I'd pick him up and try to get him going, and he would just be limp in my arms,” Graziano says. “For years, my roommates and I would look at each other like, ‘Oh my god, he doesn’t have any bones.’ It was just this silly little joke about the way he would behave when he truly didn’t want to do something.”

That’s why a no bones day is roughly analogous to Mercury in Retrograde. You might have a “deep-seated existential dread about what's happening in the world and everything going on, but it's a no bones day, so that makes sense,” he says. On a no bones day, Graziano recommends “wear[ing] soft clothes all day. If you're going to wear jeans on a no bones day, that’s on you.” Other ways to cope with a no bones day include cancelling all activities that you don’t want to do that day, if you can. A bones day, by contrast, is an invitation to treat yourself. “Get a bacon, egg, and cheese,” Graziano says.

Of his sudden-ish platform — Noodle also happens to have over 44 thousand followers on Instagram — Graziano says that he loves seeing how positive people are, even on a no bones day, and that people have been asking for merch. But he takes a minute to share how passionately he feels about adoption, particularly of senior dogs. “When I got [Noodle], there were a lot of people who just wouldn't adopt this dog because he was old and I'm kinda like, I get the last laugh. There's so many dogs out there that have such incredible personalities just like this,” Graziano says. “I love this dog more than anything. I live on the fifth floor — I carry him up 66 stairs three times a day so he can go on a walk. And I'll do it forever if I have to.”