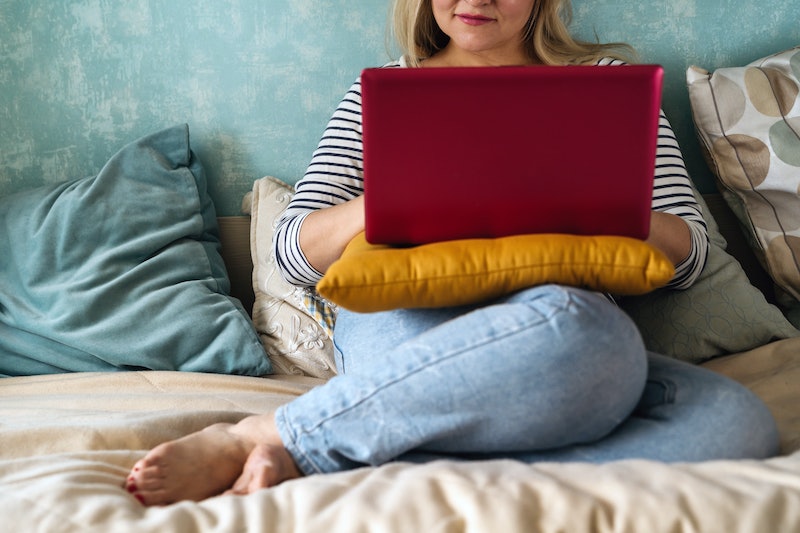 Since 2009, the free online chat website Omegle has been randomly connecting strangers via video and text, but you probably haven't used it since the last time you had a sleepover. Despite the company's best efforts to monitor inappropriate content, the site, like the very similar Chatroulette, scared off many users who logged on to find an endless parade of dick pics. But now, people are apparently so sick of Zooming with people they know that they are willing to risk an unsolicited genital flashing in exchange for an unfamiliar face. Yes, Omegle and Chatroulette are back.

According to Google Trends, searches for Omegle have been steadily increasing since the week of March 8, when many American cities went on lockdown. "Omegle (oh·meg·ull) is a great way to meet new friends, even while practicing social distancing," its recently updated homepage reads. "When you use Omegle, we pick someone else at random and let you talk one-on-one. To help you stay safe, chats are anonymous unless you tell someone who you are (not suggested!), and you can stop a chat at any time. Predators have been known to use Omegle, so please be careful." (A representative for Omegle could not be reached for further comment.) Back in April, The Daily Beast reported that Chatroulette usage was up more than 50% during the first week that stay-at-home orders were enforced. Andrey Ternovskiy, the CEO of Chatroulette, tells Bustle that usage has gone from 48,000 daily users pre-pandemic to 148,000 daily users at the end of May.

Celebrities and influencers are attempting to embrace the nostalgic comeback of the platform. In July, The New York Times reported that Omegle videos on TikTok had become a genre unto themselves. In May, Emma Chamberlain uploaded a YouTube video titled "HAVING MY BIRTHDAY PARTY ON OMEGLE," and the caption read simply, "regret." In it, she attempts to celebrate her birthday by decorating cupcakes while enticing strangers to wish her a happy birthday. She chats with girls her age, who are starstruck and thrilled to send her birthday wishes. She talks to some teen boys who give her advice on which frosting to decorate which cupcake with.

After editing out all of the obscene content, the video appears almost wholesome. Maybe Omegle has changed, you might wonder as you watch the video. And then Chamberlain closes her laptop and says, "To be honest, it was really traumatizing, I saw a lot of things I didn't want to see. I thought I was going to be on there for longer, but I literally saw so many ~hot dogs~." (Omegle's homepage contains a disclaimer saying that users "may be denied access to Omegle for inappropriate behavior, or for any other reason" and stresses that while the chat is moderated, "moderation is not perfect. You may still encounter people who misbehave. They are solely responsible for their own behavior.")

Leah, 28, had not been on Omegle since her early twenties, and never imagined she'd see value in it again. And though she notes that there are still meat sticks aplenty on the platform, she's had a few "fun" goes at making small talk with strangers. "It's a similar thrill to going out to a bar. You have no idea who you are going to meet, what you might talk about — honestly I'm lonely and wanted to feel that the butterflies that come with talking to a stranger," she tells Bustle. While Leah says she's enjoying interacting with new people, she says she doesn't plan on using it once she can go out again. "It's kind of scary and exciting and, yeah, also disgusting — so, I don't know about using this site when things go back to normal."

As for the unsavory content for which Chatroulette, like Omegle, has a reputation, Ternovskiy says that "more normal people are using the site," which he hopes will lead to less offensive content. "Before, it was a lot of creeps on the site, because creeps are more reclusive. Now, normal people are stuck at home, so the ratio has changed." But despite the fact that more rule-abiding citizens are at home, when I chose the "filtered" moderated chat type to investigate, I was instantly bombarded with dicks. (The site's rules state that no adult content is allowed in the filtered chat, and violations may result in being banned from the site.)

Despite the unavoidable NSFWFH content, people are flocking to platforms like Omegle and Chatroulette because they are just that lonely and bored. But don't worry: as soon as stay-at-home orders are lifted, you'll be able to interface with strangers IRL again. As Ternovskiy says, "Chatroulette is not a replacement for real life. Real life is more fun. But it's working for now."

This article was originally published on May 28, 2020