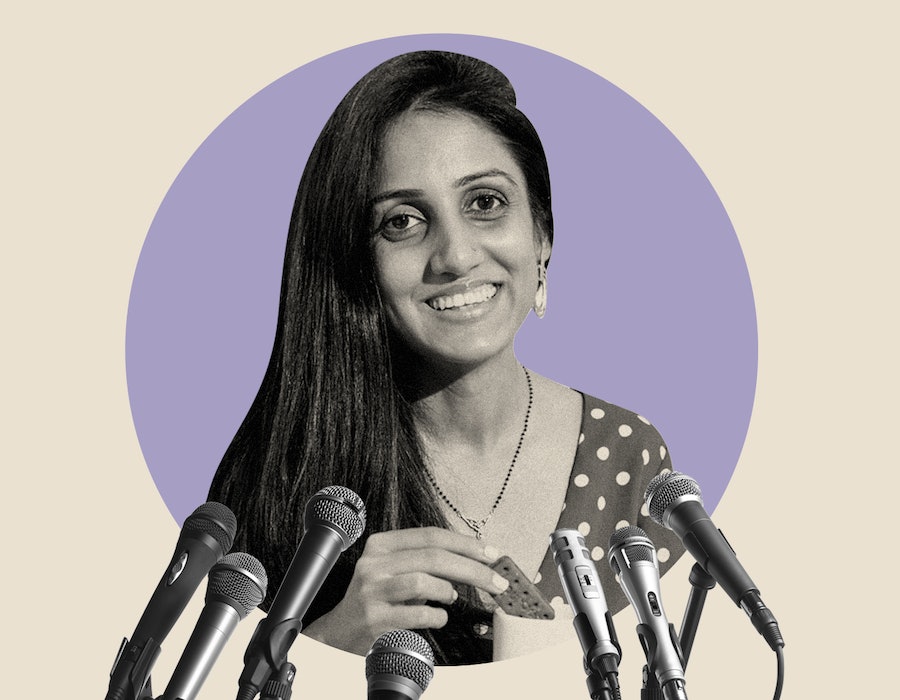 In Bustle's Quick Question, we ask women leaders all about advice — from the best guidance they've ever gotten to what they're still figuring out. Here, One Stripe Chai Co.’s CEO and Chief Chai Officer Farah Jesani tells Bustle about taking risks, exploring her identity, and filling a gap in the coffee industry.

In early 2015, Farah Jesani left her consulting job in New York to spend the summer in Portland, Oregon, to brainstorm what she wanted to do with her life. The then-27-year-old explored different coffee shops, honing her barista skills and learning why an artisanal latte is pricier than one from a store-bought brand. One particularly sunny day, Jesani was working from a café when she broke one of her implicit rules — she decided to order a chai latte instead of coffee. Growing up in Atlanta, Georgia, as the child of Indian immigrants, Jesani thought of chai as something you only drank at home. Still, she figured if coffee shops cared so much about their java, they’d pay the same attention to their chai.

“This drink tastes like nothing,” Jesani recalls thinking in the moment. “I went through all these emotions, feeling angry that that drink was being passed off as chai.”

In truth, there weren’t a lot of good options out there. Because many cafés don’t have kitchens, baristas need to be able to make a cup of chai with tools like an espresso machine’s milk steamer, which means they rely on powdered mixes or liquid concentrate. “No one was really putting thought into the craft of chai the way they were into coffee, yet every coffee shop had a weak replacement for chai on the menu,” Jesani, now 33, tells Bustle.

Jesani saw a gap in the market that she could fix. She and the manager at the coffee shop where she worked experimented with different combinations of black tea and spices to see if they could blend a chai concentrate that baristas could make. Fast-forward nearly six years, and One Stripe Chai Co. now sells chai blends, pre-mixed haldi doodh, and other offerings to professional and amateur tea lovers alike. (Oh, and Jesani stayed in Portland.)

As she approaches the one-year mark of running a business during a pandemic, Jesani reflects on her creative process, seeking fulfillment, and learning about her own history through chai.

How did your family react when you told them you were launching a chai company, since it’s such an important part of your culture?

My parents were very supportive — they’ve both been entrepreneurs, and my dad always wanted us to be our own bosses. I got a lot of advice from my dad, who’s an accountant. I think they didn't understand what I was doing, though. There was a period of time where they were like, “We're not completely sure what it means that you have a chai company.” The idea of chai concentrates was so foreign to them because it's not the traditional way of drinking it.

Do your parents use your concentrate, or do they stick to the stove-top method?

My parents will always stick to their stove-top chai, but we do have a loose-leaf tea blend that we launched last year that my mom uses.

So it’s been five years since you launched your first product. What’s the best piece of advice you’ve gotten about running a business since then?

I was always really nervous that if we got a "no" from somebody, that that would be the end of the world. I've been trying to instill this worldview of, “There are so many other opportunities out there that really the most important thing is to focus on your main goal.” What's your mission? Go forward at that without getting caught up in all the noise around you.

What would you tell someone looking to fill a market gap like you’ve done?

Tell me more about how the business has changed during the pandemic.

Until last year, we were primarily a business-to-business (B2B) company. We were trying to grow and sell to as many coffee shops across the country as we could. When the pandemic started, all of our clients shut down. In April, we had to make a decision: Do we want to close down because this is bad news for our business, or do we want to pivot? We had to figure out how to bring our chai to our customers at home.

We were already seeing our small grocery presence growing, and then we launched two new products — a loose-leaf chai blend in May, and then “It’s Haldi, Doodh,” a turmeric latte blend, in August. I had already been thinking about launching these products, I just didn't have the time before. We multiplied our e-commerce business by 10 by the end of the year, and that was huge.

How has running a chai company impacted your relationship with your culture?

This business has allowed me to learn more about my own identity as an Indian Muslim child of immigrants. Why is it that when I go to India, no matter what corner of India I go to, even though languages and religions are different, I can order a cup of chai? No matter if I'm speaking in the same language as the other person, they're going to know what I'm talking about and I'm going to get exactly what I want. That, to me, is so fascinating.

There's still so much more to learn, and that's been such an interesting and fun part of running One Stripe Chai. You have to really think about the history of chai. How did tea even come to India? People weren't drinking chai thousands of years ago. It was the British who brought commercial tea farms to India and initially marketed tea to Indians.

Chai has had such a lasting impact that even as our parents came to America, the first thing you get when you go to someone's house is still a cup of chai. And everyone turns this drink — black tea and a little bit of milk — into their own thing: “Well, in my house, I add these spices and I add this type of sweetener.” From home to home, from region to region.

Any parting words for other women or people of color looking to start a business?

It is very scary starting your own business, and it's hard to know what to do sometimes. I don't want to make it seem like, “Oh, it's easy” and you can just pivot when things aren’t working out. You're always going to hit walls and get nos. Know that there are other people who have done it before you, and we have to support each other so that we can all grow.

More like this
5 Signs You Have A Toxic Relationship With Yourself
By Lexi Inks
Why We Love Investigating Friendship Breakups
By Carolyn Steber
Savannah Guthrie Got Her First-Ever Tattoo With This Former Wild Child
By Suzanne Zuckerman
24 History-Making Black Women You Probably Didn't Learn About In School
By Ayana Lage and JR Thorpe
Get Even More From Bustle — Sign Up For The Newsletter
From hair trends to relationship advice, our daily newsletter has everything you need to sound like a person who’s on TikTok, even if you aren’t.