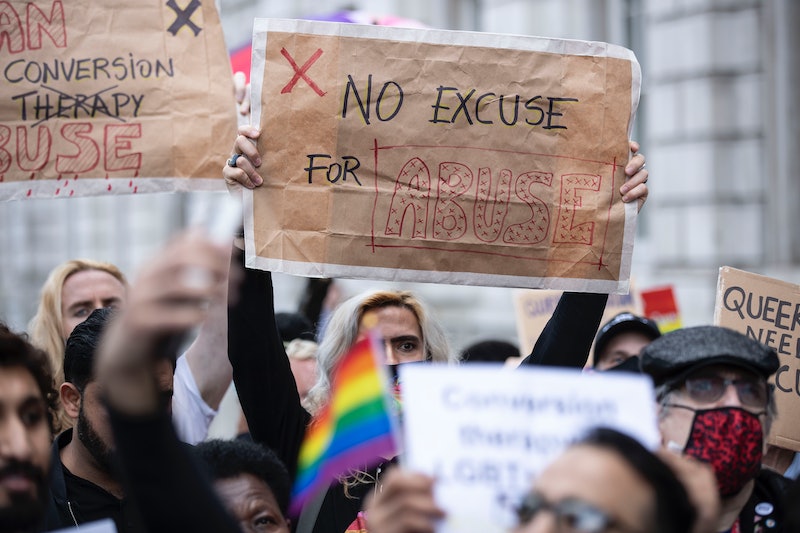 Even as this year’s Pride Month draws to a close, one important issue that deserves our continued attention is conversion therapy. Although the UK’s LGBTQ+ legislation can be viewed as comparatively progressive, in reality, the cruelties of conversion therapy continue to cast a long shadow, with the official outlawing of the practice in England and Wales only taking place in May 2021.

Stonewall explains that conversion therapy (also known cure therapy or diversity eradication, repression and change efforts (DERC-efforts)) is a treatment that aims to change someone’s sexual orientation or gender identity. “It is based on an assumption that being lesbian, gay, bi or trans is a mental illness that can be ‘cured,’” the organisation writes.

A report from by Stonewall in 2020 explained that conversion therapy can take many forms. For some, it involves religious-based practices (praying or fasting, for example), for others it may take the form of talking therapy, verbal abuse, or behavioural conditioning and, in the most shocking cases, it can involve physical and sexual violence. The National LGBT survey found that at least 2% of the 100,000 LGBTQ+ people they spoke to in 2018 had undergone conversion therapy and a further 5% had been offered it.

Elsewhere, similar debates are ongoing in Scotland and Northern Ireland. In April 2021, Stormont passed a motion calling for a ban on conversion therapy, but an official outlawing has not yet occurred.

However, as these debates continue to be dragged back and forth through governmental bureaucracy, there are organisations across the UK working tirelessly to change the lives of LGBTQ+ people and take a stand against harmful practices like this. They give support those who have experienced conversion therapy, provide expertise on how it can manifest, and offer advice to loved ones on how best to support someone who has gone through it. In other words, their work is truly vital and you will find details about how to support them below.

More like this
Footballer Jake Daniels Shared His Thoughts On A World Cup Boycott
By Sam Ramsden
It’s About Time Black Girls’s Voices Were Heard – & 'Girlhood Unfiltered' Is The Start
By Paula Akpan
Iran Has Issued A Death Sentence Over Mahsa Amini Protests
By Catharina Cheung, Darshita Goyal and Maxine Harrison
Heinz Just Relaunched A Bean-Tastic '90s Fave
By Sam Ramsden
Get The Very Best Of Bustle/UK