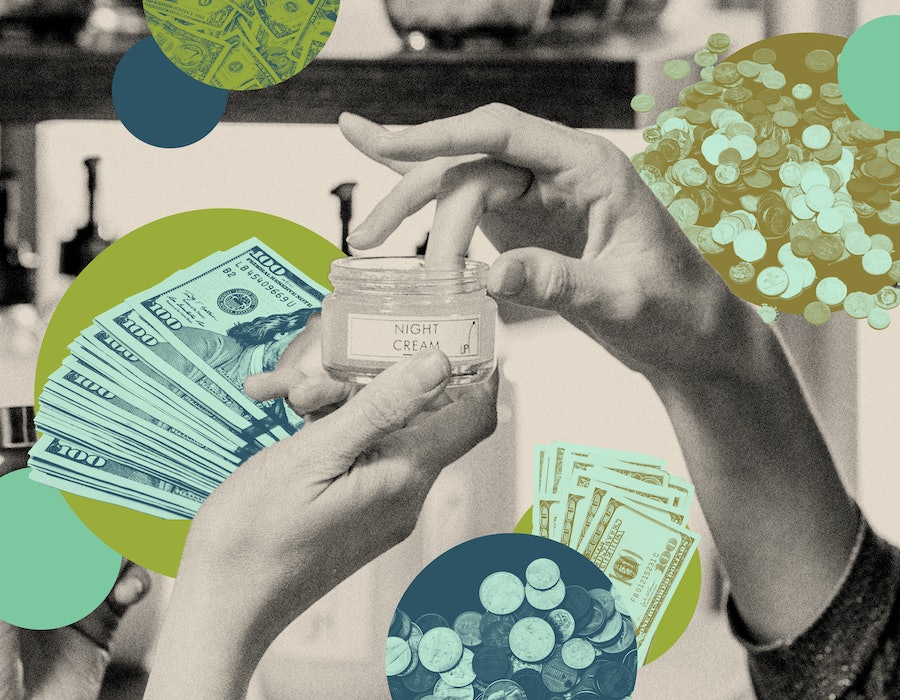 In How I Paid It Off, Bustle's asking real readers about the, uh, unconventional ways they paid off their student loans. Here, Katie*, 35, tells us about how her Rodan & Fields side business helped her pay off $100,000 in 13 years.

Tell me about yourself. What do you do? How did college help you get there?

I studied communications in undergrad, and immediately after, I got my masters in communications and public relations. I graduated college in 2008 and grad school in 2009 — I felt really lucky to graduate in the middle of the recession and get a dream job straight out of school, where I stayed for eight and a half years. Now, I do corporate communications for an insurance company.

How much student debt did you take on?

Most of my student loan debt was from my undergrad. It cost $20,000 a year, so $80,000 after four years. For my grad program, I got some funding, but I had to take out additional money to live. With interest, my debt ended up being close to $100,000 altogether. All that money over 13 years — it makes me sick to think about.

What made you decide to try selling Rodan + Fields? What was it like getting that business off the ground?

Everything I was making in my career was going towards my student debt. I felt like if I wanted to have a normal life where I could afford extra things or one day buy a house, I was going to need a side hustle.

About four years ago, I reached out to a friend who had been selling me Rodan + Fields to help with my acne. It cleared up my skin and I fell in love with the products. I turned up my nose a little bit at the idea of doing direct sales. I didn’t think that it was for me — I had a successful career already. But then I was like, ‘Well, I’m already recommending the products to people, so what if I just sold them?’ After six months I realized I could make some real money doing it. I put about 10 hours a week into it over the past four years.

What was the one thing you scrimped on most while you were paying it off?

The apartment I was renting from my friend’s brother wasn’t the greatest. After a few years of my side hustle, I was able to move into a brand new apartment in downtown Cleveland. It was a huge step for me to have the money to live in a great apartment in a great area.

What was the biggest money lesson you learned from paying off your student loans?

To ask the questions about the terms of any loan up front. I will never let my future children do what I did and take on this kind of debt — especially without understanding its terms, especially the differences between federal and private loans and the way interest accrues over time. Not knowing this upfront held me back for years in my adult life.

Neither of my parents went to college, so they didn’t understand what it meant to take out all that money. I remember being in the financial aid office at Ohio University and feeling pressured to take out the maximum amount. You’re 18 years old and someone is telling you, “It’s free money! You have the rest of your life to pay it off!” At a 6.8% interest rate, that money is so far from free.

Would you recommend other people use direct sales to pay off their loans?

100%. It was the best decision I ever made because it allowed me to pay off my student loans early and live the life I want to live: Travel, eat meals out — just being able to say “yes” to things.

What do you think about the possibility of student debt cancellation?

I am so torn on this, especially since I just paid off my student loans. I am a little jealous and resentful if I’m honest, because I feel like I worked so hard to pay off my debt.

But what’s happened with student loans — interest rates are at 6.8% and are even higher than if you took out a mortgage — is wrong. I’d be happy to pay back what I took out, but the interest is really frustrating to me.

This may sound dramatic, but I finally feel free. When I submitted that last student loan payment in one big payment last month, my eyes welled up with tears. It felt so far away for so long.

This article was updated from its original version on April 15, 2021.

This article was originally published on April 13, 2021