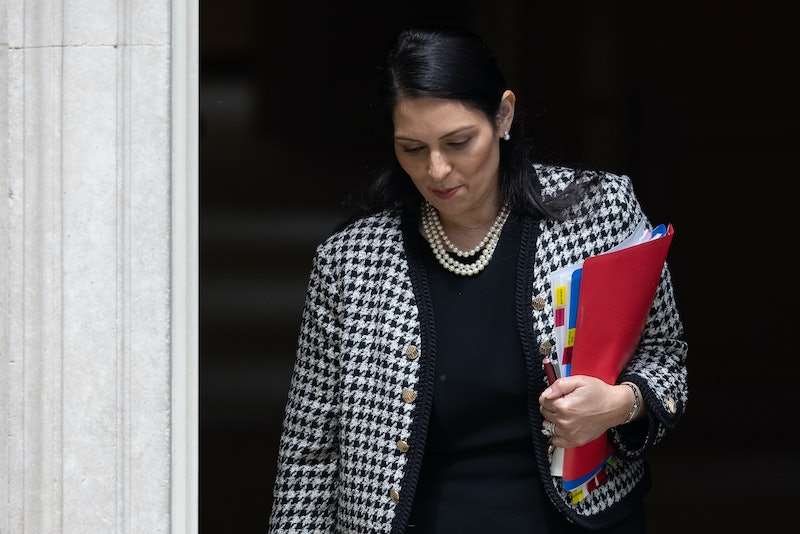 Implemented by the Home Office and Home Secretary Priti Patel, the “landmark” Nationality and Borders Bill is now being debated in the House of Lords this week. First introduced to parliament in July 2021, the bill was passed to the House of Lords in December for further review.

On Monday, Feb. 28, the bill experienced four defeats in the House of Lords including the removal of two controversial clauses. There will be a further two debates on this bill in the Lords (Mar. 2 and Mar. 8) and then it will return to the House of Commons for further review where the government can either accept or challenge the changes.

As BBC News reports, more than 36,000 refugees applied for asylum in the UK last year, with only a fraction of those being offered refugee status or other protections.

If these changes to the new legislation are challenged in the House of Commons, it could signal a worrying change for those who have entered the country through means that are deemed by the government as “unlawful”.

Opposition leaders, campaigners, and charities are critical of the proposed bill, saying it will cause more harm than good for those seeking a better life in the UK. Keep reading to find out all the key details you need to know about the. bill.

What is the Nationality and Borders Bill?

Formerly known as the Sovereign Borders Bill, the government says the proposed legislation aims to crack down on people-smuggling, and to simplify the immigration process by creating a system that is “fairer with faster access to justice to help prevent the need for last-minute legal claims.”

Those caught people-smuggling could face prosecution with a maximum life sentence, and a new criminal offence will also be introduced for those who enter the UK illegally. Refugees that have entered the UK knowingly without permission will “receive a new temporary protection status rather than an automatic right to settle,” the government writes, “and will be regularly reassessed for removal from the UK.” They will also have limited family reunion rights, as well as limited access to benefits.

The proposal also includes plans to place asylum seekers in offshore centres “where they can be housed while their claims, or appeals, are being processed,” according to the Guardian. Leaked reports have revealed that disused ferries and abandoned oil rigs have reportedly been considered as possible locations, as well as Ascension Island – a British territory 1,000 miles off the coast of Africa.

The plan is also expected to introduce:

The Borders Bill will also strengthen ways in which people can legally enter the UK, including through the UK Resettlement Scheme that was introduced in February 2021. However, according to iNews, the scheme has yet to produce any numerical targets for rehoming refugees.

How will this affect migrants living in the UK that entered the country “unlawfully”?

Patel has said measures in this law will make it easier to remove migrants who reside in the UK unlawfully. “Those who have successful claims having entered the UK illegally will receive a new temporary protection status rather than an automatic right to settle and will be regularly reassessed for removal in the UK,” the Home Secretary said, per the Daily Mail. “And, for the first time, whether someone enters the country legally or illegally will impact how their asylum application is dealt with.”

Patel goes on to explain that asylum seekers that have applied in advance and come to the UK through legal routes, like the United Nations’ refugee agency, “will win permission to come to Britain immediately, and will be allowed to stay indefinitely.”

What has Priti Patel said about the new plan for immigration?

Described as a bill centred around “fairness for those who are fleeing persecution, oppression or tyranny and fairness for the British taxpayer,” Patel’s main goal with this proposed legislation is to crack down on the “vile criminals” who run smuggling operations. “This isn’t fair to the vulnerable people who need protection or the British public who pay for it,” she said in a statement (via the Guardian). “It’s time to act.”

Patel continued: “This legalisation delivers on what the British people have voted for time and time again – for the UK to take full control of its borders. It paves the way for a fair but firm system that will break the business model of the gangs that facilitate dangerous and illegal journeys to the UK while speeding up the removal of those with no right to be here.”

What did the House of Lords remove from the Nationality and Borders Bill?

After receiving significant backlash, Clause 9 and 11 of the Nationality and Borders Bill were removed by the House of Lords. Clause 9, which was introduced in December 2021, technically gives the Home Office the power to strip a naturalised Brit of their citizenship without notice. That means that anyone who arrived in Britain as an immigrant and later became a citizen. Although the Home Office has said that those deprived of citizenship will have the right to appeal, the details around this are still unclear.

On Dec. 8, 2021, the Home Office told the New Statesman that Clause 9 would only appeal in “exceptional circumstances” such as “when someone is in a war zone” or when informing them “would reveal sensitive intelligence sources.” However, critics are still concerned about the precedent it may set.

Another part of the bill removed was Clause 11, which would have seen refugees segregated into two categories based on how they travelled to the UK. Per the Guardian, those who came to the country “through government-sanctioned routes” would have received an “inferior form of protection” than those who made their own way across the channel.

People that travelled via an illegal route would have their claim for asylum ruled inadmissible, potentially go to prison for four years, and have no access to public funds.

What have campaigners said about the proposed reforms?

Campaigners have said that these proposals “could see thousands of refugees turned away and vulnerable migrants criminalised for seeking a better life”. Through analysing Home Office data, the Refugee Council concluded that 9,000 refugees may no longer be given protection due to how they arrived in the country.

Tim Naor Hilton, chief executive of Refugee Action, agrees with the Refugee Council’s conclusion. Hilton told iNews that the “bill flies in the face of decency and international law”, an accusation rejected by the Home Office. Hilton said that this bill would be “met with fierce resistance by campaigners, faith groups, lawyers, and MPs from all political parties.”

Labour’s Shadow Home Secretary Nick Thomas-Symonds claims that the proposals would “reduce support” for victims of human trafficking, and “potentially break international law.” The Law Society of England and Wales agrees with this sentiment, adding that they warned the government that these “plans were likely to breach UK obligations under the 1951 Refugee Convention, the cornerstone of international asylum law,” per BBC News.

More like this
Iran Has Issued A Death Sentence Over Mahsa Amini Protests
By Catharina Cheung, Darshita Goyal and Maxine Harrison
Footballer Jake Daniels Shared His Thoughts On A World Cup Boycott
By Sam Ramsden
Joe Lycett Just Took HIs David Beckham Qatar Protest To A Whole New Level
By Sophie McEvoy
What To Know About Martin Bashir After Watching 'The Crown'
By Bustle UK
Get The Very Best Of Bustle/UK