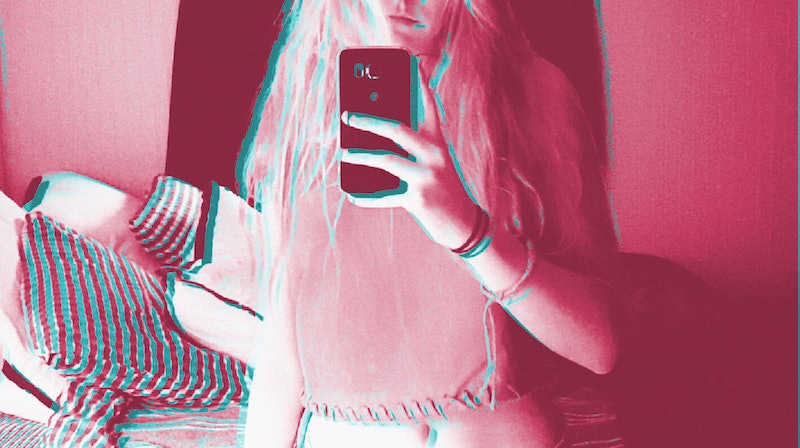 Spend enough time scrolling through TikTok’s “For You” page, and you’ll stumble on videos hashtagged #WeightLossCheck or #WeightLossHacks. Here, users show off their body-size changes and share explainers on how you, too, can lose weight. TikTok’s algorithm surfaces content based on your recent interactions, serving up clips similar to the ones you seem to show interest in. If you end up liking any of these posts, or watch enough of them all the way through, they’re basically all you see on your main feed.

Cati Angela* (@EDRecoveryGurl) knows this cycle well. The 20-year-old grew up training for a career in dance, attending a prestigious ballet school nine hours away from her hometown in New Brunswick, Canada. At 13, she used binge-eating to cope with homesickness; by 14, her instructors were telling her to lose weight. She was hospitalized for anorexia at a routine doctor’s appointment when she was 17, but a year in recovery was undone when she relapsed in 2018 after seeing “clean eating” videos on social media.

“I saw people skipping meals or not eating all day and then coming home and eating a little salad,” Cati tells Bustle. “You think, ‘If other people are doing it, I can too.’”

Cati’s relapse came a few months before TikTok launched to exponential growth in the U.S. in August 2018. She joined the platform in 2019, and quickly noticed the same kinds of feedback loops as she saw on platforms like Instagram. Weight-loss videos are everywhere on TikTok: content tagged #weightlosscheck has nearly 285 million views, for one example. On February 23, VICE reported that Rae Wellness, a supplement company, announced it would pull its “metabolism drops” from the market after they went viral on TikTok. Though the product isn’t explicitly marketed as a “diet aid,” young users were boasting dramatic weight losses after using the drops, which contain raspberry ketones, taurine, and caffeine; each of these is thought to improve metabolism or suppress appetite.

The more we see something, the more ... normalized it will feel.

Pro-eating disorder content on the internet is as old as the internet itself. After the presence of pro-ana content gained wider recognition in the early aughts, early online providers like AOL, MSN, and Yahoo started shutting down pro-ana sites hosted on those domains. These days, social media, from personal blogs to Tumblr, Facebook, Instagram, and now TikTok, document images, strategies, and encouragement, making them both normalized and readily available.

Whether or not content creators label themselves pro-ana, people in these circles will recognize it as such — even if moderators looking for certain hashtags or keywords can’t. One study on Instagram and Pinterest found that creators of pro-ana content often avoid moderators by putting certain keywords in their usernames instead of in hashtags on their posts, or intentionally misspell them, with “thinspiration” becoming “thynspiration.”

“The problem with TikTok is that it’s working exactly as it should — giving users a personalized and pleasurable experience by showing them what they likely want to see,” says Ysabel Gerrard, Ph.D., a University of Sheffield lecturer who studies the relationship between social media and self-harming behaviors, and authored the above research. "TikTok’s For You page is only likely to recommend eating disorder-related content if someone’s already engaging with it.” Unfortunately, recommendation algorithms often can’t differentiate between pro- and anti-eating disorder content, Gerrard says, so someone who’s looking for recovery-related videos could end up seeing pro-ED ones instead.

TikTok has tried to fight the spread of this content. “We prioritize the safety and wellbeing of our users,” a spokesperson tells Bustle, adding, “Content that supports or encourages eating disorders is strictly against our Community Guidelines and will be removed. This is a complex and multifaceted issue, and we work each day to ensure that we are growing our policies and practices to keep our community safe." Along with its Safety Center, which contains wellness resources including links to the National Eating Disorder Association and S.A.F.E., if a user searches #proana or #anorexia, they’re directed to the Suicide Prevention Lifeline and a page suggesting users reach out to people they trust for help. However, searching for other popular pro-ana hashtags like #thighgap, #thinspo, or #collarbones doesn’t surface the same resources.

Finding a balance is tricky. “Enforcing overly strict rules about eating disorders risks re-stigmatizing an already-stigmatized condition,” says Gerrard. “It’s a really careful balance and not at all easy to resolve.”

For users like Cati, reporting content that encourages disordered eating can result in videos being removed. She also manages her own feed by marking posts as “not interested” to help recalibrate her For You page. “I’ve been in remission for a while, so I have the strength to report videos encouraging starvation and restriction,” she says. “But for someone else, it’s dangerous.”

There were so many comments like, ‘If you overeat, then purge!’

That said, experts like Gerrard believe there’s a way for TikTok to be a helpful platform to those in recovery. “Researchers have long known that social media ... offers supportive communities for people with stigmatized conditions like eating disorders,” she says. “When created and circulated appropriately, there’s no reason TikTok can’t offer an extra space for people to express their feelings and share experiences.”

Those promoting a different approach to eating often find themselves on the receiving end of abuse. In December 2019, Sammi Haber Brondo (@veggiesandchocolate) posted a video about overeating — specifically, how it’s fine occasionally to do so. The video garnered more than 600,000 views and angry feedback. “There were so many comments like, ‘If you overeat, then purge!’ and ‘Don’t be fat! It’s better to be skinny!’” she says.

After all, safety measures are only as good as people’s willingness to use them. A 2016 study on the relationship between social media use and disordered eating in users between 19 and 32 found a consistent correlation: As social media usage increased, so did instances of disordered eating. “When someone is in the early stages of recovery from an eating disorder, anything will feel like a trigger,” says Catie Lynch, LCSW, a New Orleans-based clinical social worker who specializes in eating disorder recovery. “It can be hard to suck yourself out of it. The more we see something, the more ... normalized it will feel.”

When Cati was sick as a teen, she couldn’t escape this kind of content online. “I saw others doing similar behaviors on social media, and I felt like it validated my illness,” she says. She took a two-month hiatus from social media after her May 2018 relapse, limiting her time each week when she re-downloaded her apps later that summer. She currently has no personal social media accounts, only ones for anti-eating disorder content.

As a user, she feels a responsibility to show that recovery is possible and hopes TikTok takes responsibility for health information on the app. “[Users] might take what they see seriously. They might take it as medical advice,” she says. But her belief in the power of TikTok is also what motivates her to keep making content. “I want to be the person I needed to see online when I was sick.”

*Cati Angela asked to only use her first and middle names to protect her privacy.

More like this
How To Turn Off TikTok Profile Views So You Can Stalk Other Accounts In Secret
By Alexis Morillo
11 Super Bowl Instagram Captions To Use On Game Day — Even If You Don’t Like Sports
By Alexis Morillo
Ashamed Of Your Screen Time Stats? Here's How To Change That
By Alexis Morillo
Learning To Love, Not Judge, The Lunchbox Wives Of TikTok
By Esther Zuckerman
Get Even More From Bustle — Sign Up For The Newsletter
From hair trends to relationship advice, our daily newsletter has everything you need to sound like a person who’s on TikTok, even if you aren’t.