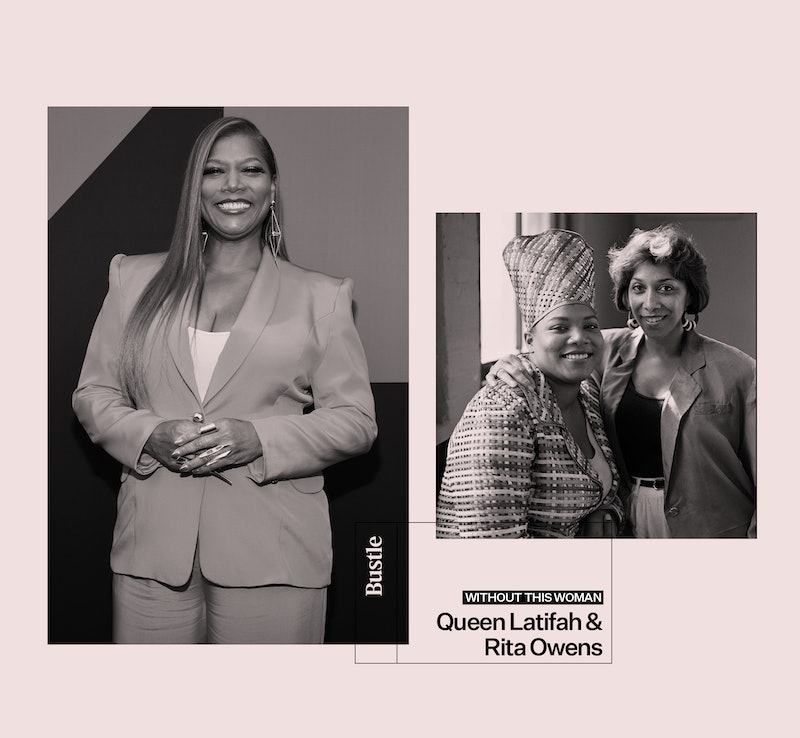 Bustle's "Without This Woman" is a series of essays honoring the women who change — and challenge — us every day. Below, Queen Latifah opens up about her relationship with her mother and making Beyond Breathless, a documentary on her mother’s long battle with scleroderma-associated interstitial lung disease, which premieres on A&E at 12 p.m. EST Dec. 5.

A month after my due date, my mother, Rita Owens, spent 36 hours in labor. I basically got kicked out of her womb because I was too comfortable there.

As we were growing up in Newark, New Jersey, she worked hard to keep my brother and I as safe as she possibly could from the world. Of course, she disciplined us as well, setting boundaries and explaining why those boundaries existed.

When I was 10, my mother, who was married, told me to never depend on a man for anything. She wanted to make sure that I didn’t put myself in that position, because we all know what can happen when you need another person financially. I’m grateful she gave me such honest advice at a young age.

She was an art teacher for over 25 years, so I grew up watching her paint and sketch. There were always lots of beautiful images in our household, specifically showcasing Black beauty. Since she passed away in 2018, I’ve started to curate some of her artwork to share with family and others. I'm actually sitting in her house right now. Above the fireplace hangs her painting of the Little Rock Nine. It features the word "courage" and the American flag because as Black people, we are Americans, too. She instilled the spirit of giving in me, so I try to honor her by giving back wherever I can.

When I was a teenager and an aspiring rapper in the late ‘80s, my mother would hire the DJ for all the high school fundraisers. She actually hired DJ Mark the 45 King, who became my producer for my debut album, All Hail the Queen. Everybody knew my mother because she came to every one of my shows. Eventually, she learned to trust us and stopped coming. I don't know if she prayed incessantly or if she just believed that she instilled enough in me. Maybe it was both.

My mother’s voice was so calming. When the world was at my throat, I could sit down with her and after five or 10 minutes, it seemed like everything was going to be just fine.

As I started to achieve more success in the rap game, she said to me, "Whatever you accomplish or wherever you go in this world, you can always come home." Knowing that gave me a strength that unfortunately a lot of other people didn't have. A lot of my peers had to make decisions based on the fact that their hustle or talent was all they had and there was no going back. I had all the love, affection, and strength of my family, which gave me more power to make decisions out there in the world and to be able to walk away from a bad business deal.

My mother’s voice was so calming. When the world was at my throat, I could sit down with her and after five or 10 minutes, it seemed like everything was going to be just fine. She knew exactly what to say and how to bring a sense of calm to any situation.

My mother was unselfish and even though she was a private person, she chose to speak out about having scleroderma-associated interstitial lung disease, which made it difficult for her to breathe. A magazine approached us a few years ago asking if she'd be willing to talk about her health struggles. As far as I was concerned, it was family business, but she wanted to share her story because she felt she could help other people in the process. She was the kind of person that if you told her your problems, she took them on as if they were her own, to the point where she internalized it. She had such empathy.

With Beyond Breathless, my hope is that she would think it informs and inspires others — which is what she set out to do. It wasn’t easy for me to talk about, and not a day goes by that I don't think about her, miss her, and just want to soak her up and see her laughing — she was so funny and her timing was incredible. With this project, I think she'd want people to feel like they're not alone and they can fight this thing even if there's no cure. Until the very end, she kept her head up, kept pushing forward, and kept fighting for every single breath.

I would be nothing without her love. I don't know what she was made of, but I hope I inherited some of it.

More like this
Christina Perri Had No Idea Her 'Twilight' Song Is On YouTube's Top 100 Chart
By Radhika Menon
Gabby & Rachel Reveal How That 'Bachelorette' Rose Ceremony Twist Happened
By Grace Wehniainen
Angourie Rice Unleashes Her Inner Control Freak
By Jessica Derschowitz
At 28, Tisha Campbell Was Newly Married & Dancing Through A Career Pivot
By Grace Wehniainen
Get Even More From Bustle — Sign Up For The Newsletter