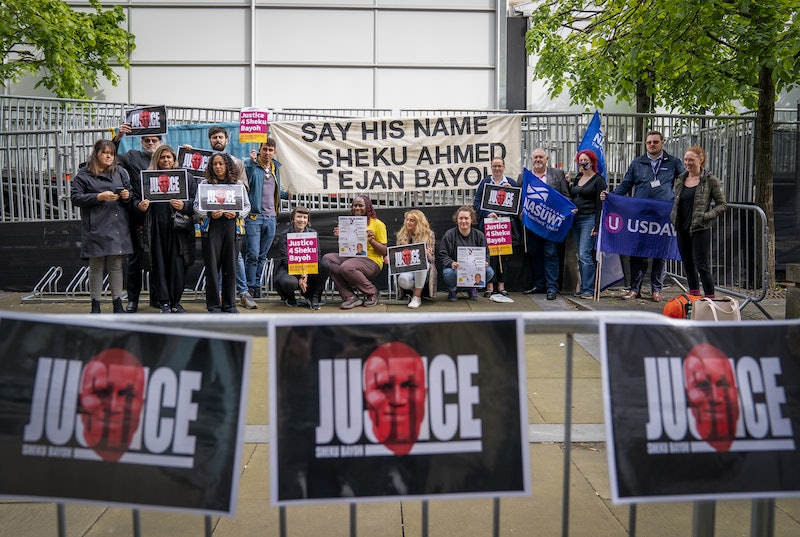 Five years before George Floyd’s murder, 31-year-old Sheku Bayoh died after being restrained by police in Scotland in 2015. In what has been described as a racially-motivated use of force by Bayoh’s family, an ongoing independent public inquiry is set to determine whether race was a determining factor in his death. Describing Police Scotland as “institutionally racist,” Bayoh’s sister Kadi Johnson and the rest of his family continue to fight for justice on his behalf. Here’s everything you need to know about what happened to Sheku Bayoh, and where his case currently stands.

Who Was Sheku Bayoh?

Sheku Bayoh was a 31-year-old father of two from Kirkcaldy, Scotland. Originally from Sierra Leone, Bayoh fled to the UK as an unaccompanied minor in 1995 to escape the civil war. When he was 17 years old, he moved to Kirkcaldy, a town in Fife, on the east coast of Scotland, to live with his sister Kadi Johnson, who had settled there in the early 1990s.

Bayoh worked in a variety of sectors, and at the time of his death, he was serving as a trainee fitter for Scottish Gas. Bayoh was also a youth leader in a local racial awareness group, and had given talks to police officers “about the issues faced by the minority ethnic youth of Kirkcaldy,” per BBC News.

What Happened To Sheku Bayoh?

On the morning of May 3, 2015, Bayoh was at the home of a close friend. They noticed that he wasn’t himself, describing him as “confused” and noting that they “couldn’t get through to him.” A toxicology report would later find that Bayoh had taken MDMA and Flakka, a “manufactured version of an Amphetamine-like stimulant”, according to Addiction Center.

Bayoh was subsequently escorted home by another friend, who he then attacked. When Bayoh reached his home, he took a knife from his kitchen and went back outside. Neighbours called the police, reporting a man behaving “erratically with a knife”.

By the time police arrived, Bayoh had dropped the knife and was walking away from the scene. Within “45 seconds,” police took Bayoh to the ground. Witnesses claim to have seen up to “six policemen kneeling and lying” across Bayoh as he was heard shouting “get off me.” By the time they did, Bayoh wasn’t conscious. While officers attempted resuscitation, Bayoh was “dying on the pavement, with his hands and legs bound,” as per the BBC.

Bayoh was pronounced dead on arrival to Victoria Hospital, with “23 separate injuries” on his body, including “a cracked rib, head wounds consistent with baton strikes, and … burst blood vessels in the eyes, which can be a sign of positional asphyxia, or suffocation.” However, Bayoh’s official cause of death was noted as “sudden death in a man intoxicated… [with drugs] whilst under restraint.”

When Kadi Johnson was informed about her brother’s death, she recalled not being “able to get a straight answer” from officers. “At first [they] told me he’d been found on the ground. Then they said they were looking for two men,” she told BBC Scotland’s Disclosure Programme. “Eventually, after talking to their boss, they told me there had been a forceful arrest, and he’d died on the way to hospital.”

16 months after, the Police Investigations and Review Commissioner (PIRC) submitted a review into the circumstances surrounding Bayoh’s death. And two years later, Lord Advocate James Wolfe ruled the officers involved would not face criminal prosecution and that Police Scotland would not face “manslaughter or health and safety charges.”

Bayoh’s family brought forth a review after BBC Scotland’s Disclosure programme obtained documents and video evidence that suggested police approached “the scene with the intention of using force,” according to Eric Baskind of Liverpool John Moore’s University, a “leading authority on police restraint and use of force.”

Yet Lord Advocate Wolfe stood by the decision not to prosecute the officers involved. “We the family lost confidence a long time ago in the ability of PIRC to carry out a robust and impartial investigation,” Johnson said in response to the verdict, “but we have tried desperately to maintain confidence in the present Lord Advocate and his team. Today’s decision feels like police protection.”

As a result of the PIRC decision, an independent public inquiry was launched in Nov. 2019 to question “whether race played a part” in the circumstances surrounding his death. “We want this inquiry to be meaningful to us as a family and Scottish society,” Bayoh’s sister told BBC News. “We want changes to happen. I want my brother’s name to be remembered as something good, not in the way it has been tarnished over the past four years.”

The inquiry is ongoing, and has seen the officers involved defend their use of force. Retired police officer Alan Paton, who was first on the scene, said their decision was “100%” the right thing to do and that race was not a factor. Another officer claimed she had been stamped on by Bayoh during the incident, but doctors and a member of the public disputed this during the inquiry.

“If my brother broke the law, he should have been dealt with accordingly. If excessive force was used, then that is not acceptable,” Johnson said. Like George Floyd, Johnson said “the authorities here wanted to blame it all on the drugs he’d taken. We don’t condone his taking drugs, but he was not himself. And we believe that if Sheku was white, he would have been treated differently and still be alive today.”