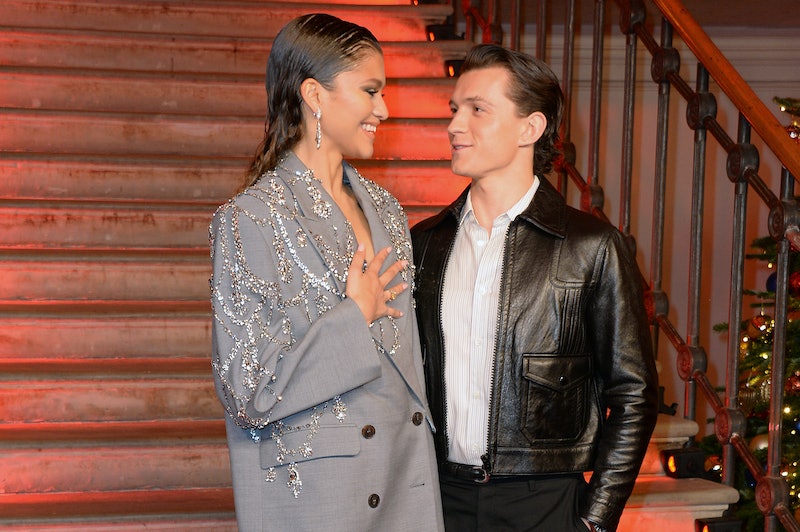 All it took was a paparazzi photo of Zendaya (5’10’’) with her arm around boyfriend Tom Holland (5’8’’) to empower men to feel confident in their height, even if it’s less than that of the woman they’re with. (Kind of.) While the phrase “short king” has been floating around the internet since 2018 as a comedic, endearing term for men under 5’8’’, i-D reported, the phrase has become increasingly popular on TikTok over the last year — videos with the hashtag #shortking have over 330 million views. But the true meaning of short king came to life at the 2022 Oscars when couples like Sophie Turner (5’9’’) and Joe Jonas (5’7’’) and Hunter Schafer (5’10’’, plus heels) and Dominic Fike (5’11’’) stood proudly together on the red carpet. Per Google Trends, the phrase “short king spring” skyrocketed in popularity during the week of the awards show, March 20 through 26, reaching its highest search volume in history.

Over the last year on TikTok, you’ve likely noticed your For You page playing host to short king pride. Ceiling-friendly creator Abbie Herbert (5’9’’) has a running schtick with her husband, Josh Herbert (5’7’’), in which they tackle topics like how to pose for photos with a short king when you’re a tall queen, or how to handle comments about a height difference in a relationship. But dating a tall queen is not a prerequisite to being a short king; indeed, the term is relationship-agnostic. One video posted on Valentine’s Day from creator @kingfemme (4’11’’), hashtagged #shortking, sardonically describes their relationship with their height: “When God made me, they forgot a few inches, OK?” they quip.

Now, the growing tag #shortkingspring has garnered nearly a million views and features a mix of men celebrating the liberating news, and women sharing their love for partners who are slightly less vertical.

Another viral short king trend on TikTok involved women calling their husbands by the term, then filming their (typically defensive) responses. But the resurgence of #ShortKingSpring is all about celebrating men at any height. It’s also resurrected a survey from 2014 published in The Journal of Sexual Medicine, which found that out of 531 men who participated, higher “coital frequency” was found in men under 5’9’’. Read: short kings have more sex.

To celebrate the start to short king spring, head to Settings on your favorite dating app and drop the height requirement as low as it will go. No more hunching next to men your height, or skipping heels to spare a new datefriend’s feelings. This season, size doesn’t matter.

More like this
Ashamed Of Your Screen Time Stats? Here's How To Change That
By Alexis Morillo
Learning To Love, Not Judge, The Lunchbox Wives Of TikTok
By Esther Zuckerman
I Spent 2 Years Trying TikTok’s Dating Advice
By Kailynn Johnson
How To Turn Off TikTok Profile Views So You Can Stalk Other Accounts In Secret
By Alexis Morillo
Get Even More From Bustle — Sign Up For The Newsletter
From hair trends to relationship advice, our daily newsletter has everything you need to sound like a person who’s on TikTok, even if you aren’t.