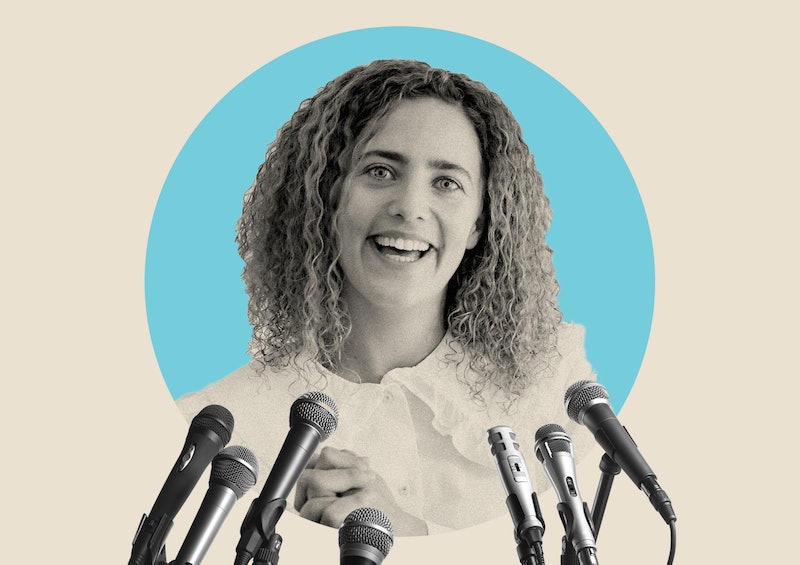 Courtesy of Women of the World/Tabitha Goldstaub
By Rebecca Fearn
March 15, 2021

In Bustle’s Quick Question, we ask women leaders all about advice — from the best guidance they’ve ever gotten to what they're still figuring out. Here, tech entrepreneur Tabitha Goldstaub talks about finding your tribe of women to work alongside, how she’s still figuring out that work-life balance with a new son, and what her original unlikely career aspiration was...

Entrepreneur Tabitha Goldstaub hasn’t always wanted to be in tech. In fact, her dream job as a child was miles away from what she does now. “I could never see any female cab drivers when I was growing up,” she says, “so for some reason that was what I first wanted to do.”

Despite the fact that she decided on a totally different career path, the sentiment behind Goldstaub’s cab driver aspirations still remains. Female representation is at the heart of what she does, and she is consistently carving out spaces for herself (and other women) where they haven’t previously been any.

And this hard work has paid off, as Goldstaub is now one of the most successful women working the UK tech industry today. As well as being the cofounder of CognitionX (which, in her own words, is a “festival for bringing together all of the best minds in technology across the world”), she also has authored a book called How To Talk To Robots: A Girl’s Guide To A Future Dominated By AI. Oh, and let’s not forget the fact that she chairs the government’s AI council.

Goldstaub believes that all three of these roles have come to be because of her “obsession” with linking people up together, and finding where there “are cracks in the system and flooding them with expert brains.”

She adds: “I think that’s always been my modus operandi; I got here through connecting people and trying to figure out what the community I am in really needs.”

Next on her agenda is speaking at at WOW (Women of the World) Festival at 8 p.m. on Monday, March 15. Tickets are still available, and in the mean time, here are some of Tabitha’s most valuable pieces of advice to help in your own journey.

What are you proudest of in your life so far?

I am incredibly proud of myself for the journey I have been on since having my son Otis 17 months ago. Just for keeping it together during the pandemic and everything. I’ve learnt so much too; like, it’s OK to take a break from work and go have lunch with my family, and to be at my desk at 9.30 rather than 6.30 in the morning. Before, I was one of those workaholics that thought the wheel would stop turning if you weren’t there, pushing the wheel yourself. But I’ve learnt that the wheel does continue to spin.

So how do you manage your work/life balance?

I don’t fully have the answer yet; some days I get it right and others I don’t. But the only way to do it is to keep trying. A piece of advice my partner’s mother gave to me actually was, “you have to put your own gas mask on before you put anybody else's on.” That’s true at both home and work. You have to look after yourself first.

How do you overcome tough days and still focus positively on work?

This is another thing that I’m not sure I’ve learnt yet. It comes back to giving yourself a break. It’s about silencing that ‘negative nelly’ in your head; you can so easily beat yourself up for taking a break. It’s about taking a pause and being allowed to sit and dwell rather than pretending you’re all cheerful. Just feel the bad days and learn from them.

Tech is largely seen as a male-dominated space. What has your experience been, and what advice would you give to young women hoping to make it in this industry?

I’ve been quite lucky in that I’ve always found a niche, so I’m not always competing with the male ‘brotopia.’ And that really is my advice to young women: think about what you love, and do that. What I mean by that is, if you love coding, become an engineer. But if you love art, become a designer, or if you like English, become a part of the team who writes chatbots or something like that. If you love maths, go into the sciences rather than trying to force yourself into something you don’t enjoy just because you think being in tech is the right thing to do. Because ultimately the tech industry needs you and your specific expertise more than you know. Artificial Intelligence is new and requires skills from all walks of life. There’s a real opportunity to get women into tech through that route.

What’s the best and worst advice you have ever received?

My best advice from others was to find your tribe and find the women who are doing what you’re doing. I saw my career trajectory change once I did that. Rather than heads down, always working alone, once I had peers, I could really grow. That really was the best change I made about six years ago.

Bad advice-wise, someone [I know] always says “have rhino thick skin.” As in, don’t let anything affect you, and that is basically trying to block out too much that’s important. Hearing negativity and knowing how to take it is actually really important. What makes me who I am is being able to be empathetic and being able to feel.

What is one of the biggest challenges you have faced so far in your career, and how did you overcome that?

Back in 2017, I left the company I had co-founded. Leaving that company was a real challenge. The biggest thing I suffered with was a loss of identity because I really didn’t know who I was without it. It was quite an existential moment for me, and one I really overcame because of those women I was talking about in my tribe. Getting advice from them helped me discover how I could become who I wanted to be as an individual and then go onto work with a company afterwards, rather than me morphing with the business.

Who do you look up to in the industry?

The women that I interview in my book – they are those peers I’ve been talking about. I connect with them all weekly and we share the sh*t show days we’re having as well as the wins. These include women like Hannah Fry, Sharmadean Reid, and Maxine Mackintosh. They’re the ones who keep me going. I can’t forget Martha Lane Fox too; she basically inspired my whole career.