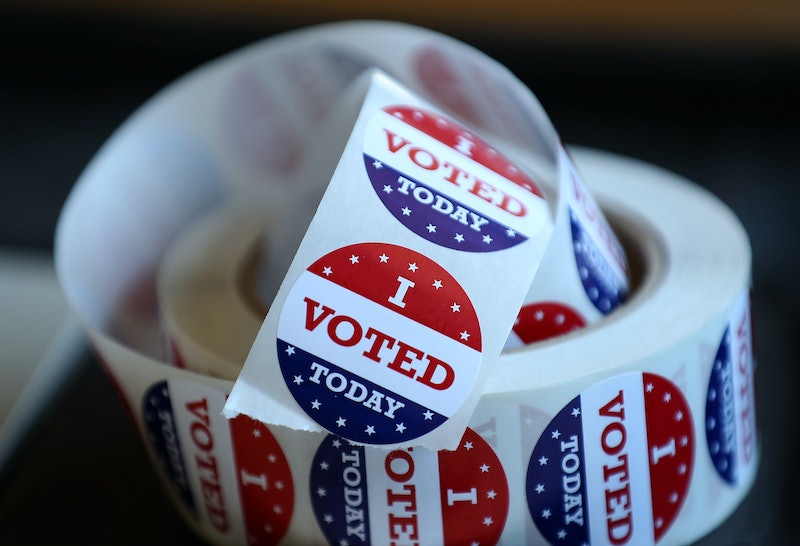 One simple pleasure unites voters from across the political spectrum on Election Day: the ubiquitous "I Voted" sticker. It's what allows you to tell the world, without ever opening your mouth, that you practiced your civic duty, on top of a great excuse to take a selfie on an otherwise dull November day. And in 2020, the quest for an I Voted sticker has become even more intense, with the popularity of mail-in ballots due to COVID-19 — no sticker included. The mysterious history of the "I Voted" Election Day sticker points to just how beloved the ritual has become.

Exactly who came up with the idea is a hotly contested question, but the stickers first emerged sometime in the 1980s. Though the Phoenix Realtors Association (PRA) claims to have dreamed up an "I Voted Today" sticker in 1985, a 1982 Miami Herald article says Fort Lauderdale businesses gave a discount to customers donning an "I Voted" sticker, according to TIME magazine.

“We were absolutely the first ones in the country,” said Skip Rimsza, the PRA president who later served as the mayor of Phoenix, in a 2006 article published in The Arizona Republic. “Back in 1985-'86, I went to the national Realtors convention, [and] no one had heard of any stickers in their communities.”

The PRA's "I Voted Today" sticker was invented "as a visible reminder to vote with the intent of increasing afternoon and evening voter turnout," according to a fact sheet PRA provided Bustle. In 1984, Vice President George H.W. Bush received a sticker after casting his vote in the Presidential election in Houston, according to Salon; it read "I Voted Today — Have You?"

A few years later, the election supply company Intab released the classic "I Voted" sticker that features an American flag. Janet Boudreau, the former Intab exec credited with the design, told TIME magazine in 2016 that she hoped the stickers would remind people that it's Election Day so they could get to the polls.

A 2017 survey found that holding "non-partisan election festivals" increases voter turnout, and a 2011 study published in Journal of Politics discovered that thanking voters for casting a ballot boosts participation in later elections. This suggests that the power of "I Voted" stickers can be attributed to turning the act of voting into more of a communal activity and making voters feel appreciated.

"Before, the folks that you knew in your neighborhood would know that you voted, and voting was an occasion. And now many of us can’t vote, or can’t take time off, or if we do, [we] don’t necessarily see the folks that we want to engage with," Celina Su Ph.D., a political science professor at the City University of New York, tells Bustle. "So the sticker, and then also publicizing you wearing the sticker online, sort of does that in a new way."

The stickers don't appear out of thin air. In 2012, Mic estimated that providing every eligible voter with a sticker would cost the government over $34 million each election, a price tag that falls on the backs of state and local governments, if each sticker cost 15 cents; however, Marketplace suggested in 2020 that they could run as cheap as one cent apiece. Salon reports that this year, some polling places are nixing boxes of stickers to keep social distancing in place between volunteers and voters. But you can still pick up stickers nationwide; the New York Magazine is distributing them on their covers and at non-profits, while 5280 in Denver is giving them out as free downloadable PDFs. And if you can't nab one at a polling place, Krispy Kreme is distributing stickers to voters. You can also download digital I Voted By Mail stickers for social media to give you the same clout for free.

Su predicts that the sticker will only rise in popularity as states engage in voter suppression efforts. While they started out as a way to get people to the polls, they may have already begun to morph into a subtle form of protest.

"When we feel like this right is in danger," Su says, "any signal to exercise that right means a lot more."

Green, Donald P. and McClellan, Oliver A. (2017) The Effects of Election Festivals on Voter Turnout: A Field Experiment Conducted During a Presidential Election. Available at SSRN: https://ssrn.com/abstract=2999305or http://dx.doi.org/10.2139/ssrn.2999305

More like this
10 Times Boris Johnson Got It Wrong On Trans Rights
By El Hunt and Sam Ramsden
How To Protect Your Digital Privacy If You Need An Abortion Post Roe v. Wade
By Kaitlyn Wylde
Michigan’s Governor Is “Going To Fight Like Hell” To Protect Abortion Access
By Andrea Zelinski
Kim Kardashian Remembers Her Last Words To Death Row Victim Brandon Bernard
By Jake Viswanath
Get Even More From Bustle — Sign Up For The Newsletter