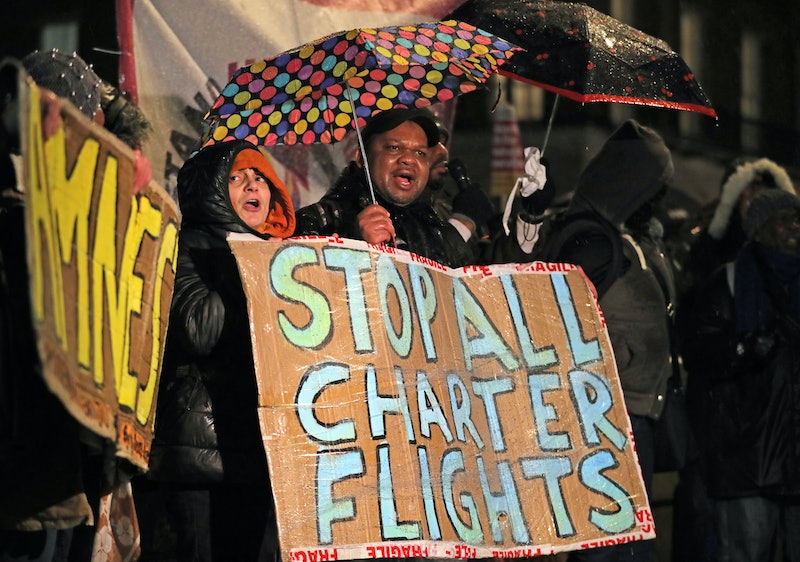 Following a series of last-minute legal appeals which forced the Home Office to postpone the deportation of 43 individuals, a chartered flight bound for Jamaica left the UK with seven people onboard this morning (August 11).

Of the seven people who were deported, three were taken from prison and four from immigration detention. According to the Guardian, among those from the latter group was one individual suffering from mental confusion, is physically frail, and had to be carried on to the plane. He is believed to have a Windrush case. Another recently lost a child and had to leave his partner, the mother of their child, to grieve alone.

Among the original 50 were several dozen people who arrived in the UK as minors. Campaigners argued that deporting people who came to the UK while under the age of 12 would be a reversal of an agreement made between the Home Office and Jamaica’s High Commissioner Seth Ramocan in November 2020.

Members of Parliament including Bell Ribeiro-Addy, Claudia Webbe, and Diane Abbott had called for the cancellation of the flight in the days leading up to August 11.

On the day of the deportation, Director of Detention Action Bella Sankey said, “This chaotic flight is the beginning of the end for mass Home Office charter flights. Horrifying suicide attempts and an unwell Windrush man being carried on to the plane, the disasters are endless. This is not how a civilised country conducts itself and public disquiet is rightly growing.”

Others have raised issues about deportation flights taking place during the COVID-19 pandemic. Maria Thomas, a solicitor who represented some individuals due to be on the flight, said: “We know the detention centre was not COVID secure as there were confirmed cases including one of my clients. It took us three stern letters to even get paracetamol for him. The home secretary’s removal practice by way of charter flights in this manner is brutal and inhumane, and a massive burden on the taxpayer. This is particularly so during a pandemic.”

On August 11, Home Secretary Priti Patel stood firm on her position, saying “These individuals are responsible for some of most appalling crimes – rape, assault, grievous bodily harm, drug offences, and sexual assault of children. They have violated our laws and values and have left their victims living with the scars of the crimes that took place against them. The British people should be in no doubt of my determination to remove these criminals to protect both the victims of their crimes and the public.”

While the fate of the remaining 43 individuals is yet unclear, below are some actions you can take to help protect them from deportation.

How To Help Stop Deportations

This article was originally published on Aug. 6, 2021