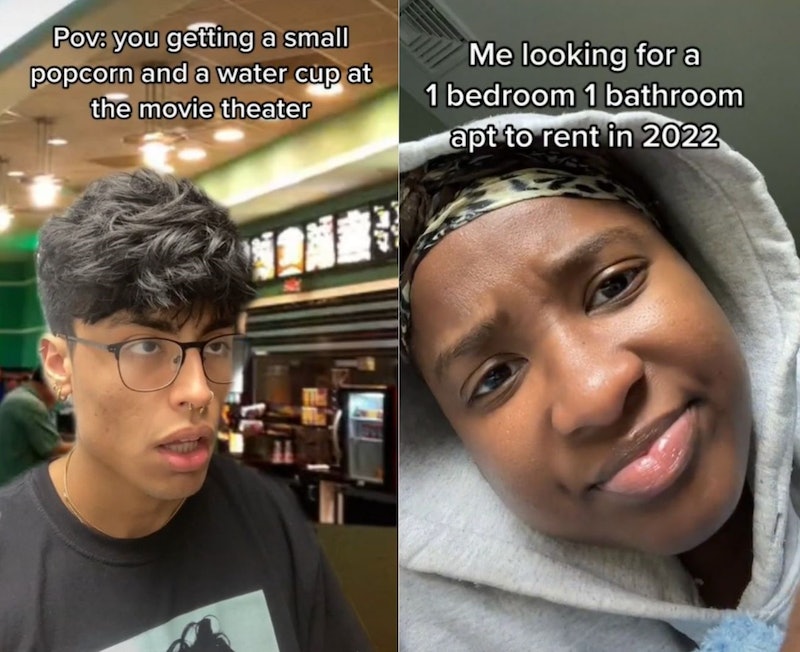 TikTok/@sauceyogranny/@ohheywoze
By Courtney Young
May 19, 2022

A new TikTok trend is stirring up the app, with a viral sound of a pained voice uttering, “thirty thousand?” The tag #30thousand has nearly 13M views on the app, and the sound has been used as the soundtrack to nearly 100k videos. The sound is simple and self-explanatory, and as such can be used in a variety of situations, like when happy hour ends and the standard drink prices roll in, when you check your Facebook notifications for the first time in two years, and when Postmates adds taxes and fees. All of these occurrences warrant the same response, “thirty thousand?”

The sound stems from a family vlog channel’s 2017 YouTube video. The original context is a worried Mommy vlogger on the phone with her insurance company discussing the cost of her kitchen’s smoke damage. The sound’s context on TikTok is, naturally, cheekier.

How are the TikToker’s using this sound?

First and foremost, the obvious. The dramatic reading of, “thirty thousand?,” quickly became the perfect reaction to any inflated charges on the internet’s debit card.

The first user to bring the viral sound to TikTok, @prestonisoverparty, took the opportunity to call out Urban Outfitters, infamous for outrageously high prices. The video has racked up 3.3M views and more than 17k comments.

Another user, @sauceyogranny, reminded us of the ultimate robbery, snacks at the movies. He jumped on the sound, captioning the video, “Pov: you getting a small popcorn and a water cup at the movie theater.”

User @ohheywoze went viral for her use of the sound, calling out the current state of the rental market, which is all too relatable for residents across the country. Her “thirty thousand?” moment read, “me looking for a 1 bedroom 1 bathroom apt to rent in 2022,” and attracted comments like, “and i be so delusional im like ‘add to cart’.”

@Girl_on_couch on TikTok took the sound for a spin to remark on an age-old issue, the bill at the end of a birthday dinner. The video has more than 1M views and hundreds of comments like, “they wanted $94 from me the other day for tacos and 3 drinks.”

To Critique Their Bad Habits

This sound has legs beyond begrudging high prices, with many users on the app looking inwards and using the sound as an opportunity to critique their worst habits.

One user, @colinzvej, used the sound to call himself out for overusing the word “slay.” The viral video reads, “Here’s the amount of times you’ve unironically said ‘slay’ today.” The video has 2.2M views and 25k comments like, “It’s become my default response to anything remotely positive.”

Another user, @bella.the.rat, gained 1.5M views on her “thirty thousand” take, reading “me checking how many days of school i’ve missed this year.” Her video collected almost 8k comments like, “I can't go a week without missing at least one day.”

All too relatable and liked by nearly 300k users, @misterbbl’s viral take on the trend read, “me counting all the red flags i missed after it ended.” The video has more than 1.5M views and thousands of comments like, “you win the trend,” and “infatuation can blind us.”

To Judge Their Friends

This viral sound has been used to call out overpriced businesses and personal failures, but the fun doesn’t stop there. On the app, thousands of users have used the sound as an opportunity to call out those closest to them, from their spending habits to their presence in the DMs.

@Nesmates went viral with her TikTok which read, “when you finally decide to check your TikTok dms and you see how many TikToks your friend sent you.” With 1.5M views and nearly 29k comments, the video nailed the trend and was all too relatable.

Another viral user, @mattheperson, collected 1.3M views for his “thirty thousand” quip, reading “pov: you ask your rich friend how much their crusty ass dog was.” The comments hilariously echoed the message with responses like, “and ofc the name is coco,” and “and they’re like two hundred years old and bite everything that moves.”