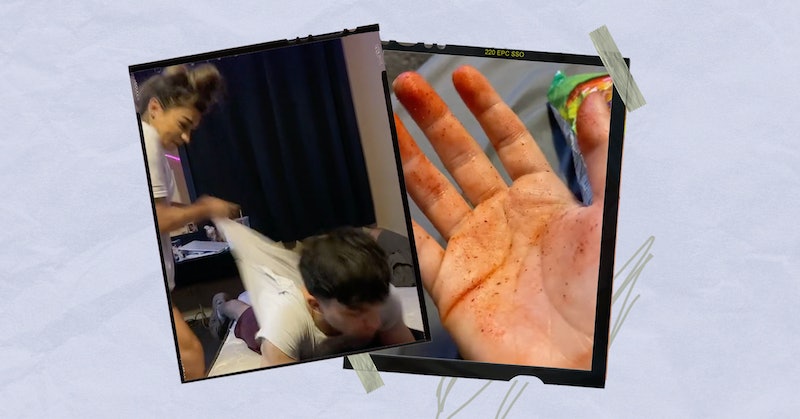 All it takes to participate in the latest challenge to go viral on TikTok is a t-shirt you don’t mind ripping and some friends. The Napkin Challenge has been sweeping the short-form social media app over the last few months, with creative — and chaotic — takes on the trend popping up every day. The hashtag #NapkinChallenge has over 231.9M views on the app and dozens of videos to peruse for your viewing pleasure.

The videos typically all follow the same style, starting with the person behind the camera revealing a stain or mess on their hands and then asking a friend for a napkin. That friend then rips the shirt off of a third person’s back to serve as the “napkin” and hands the ripped fabric to the cameraperson. Silly, right? And, the fact that we can hear the laughter from the people in the videos adds to the comedic value of the challenge.

The Napkin Challenge videos started popping up as early as June, but hit their viral stride in July. Creators on the app have taken the challenge to all locations and with all kinds of messes and materials, from ripping scrubs off of people’s backs to slapping mayonnaise on their faces.

One of the early videos from the challenge, created by @kvng.isaiah, demonstrates a classic, if not slightly absurd, take on the trend that has since been replicated across the app. In it, the cameraperson asks a friend in a skeleton morph suit for a napkin, which the skeleton retrieves for the cameraperson from a third person lying on the room’s bed. The whole video has an air of confusion and hilarity around it, which is captured in its 400.8K views and 22.6K likes.

Another example of the challenge came from user @faith1233, who offered a short but comical clip to the trend. The video, which racked up 462.6K likes and over 3,000 comments, features an effortless shirt rip that’s as funny as it is impressive. Comments on the video agreed with how flawlessly the rip was executed. One user wrote, “she did it so effortlessly,” and another commented “they all acted like it was normal.”

User @usernameunavailable088 on TikTok also contributed a video with over 460.5K views that adds another effortless rip to the challenge. Comments under the video are impressed with the shirt ripping technique, with users writing “that was the cleanest rip ever” and “BRO RIPPED IT LIKE IT WAS NOTHIN” under the video.

Other videos in the challenge prove that it’s not so easy to rip the “napkin” off of someone in one piece. A video from @jackson.klein99 shows what can happen when the shirt fabric isn’t ripped all the way off, as the two friends in this video struggle to get the cameraperson his napkin. Messages on the video, which garnered 301.5K views and 38,000 likes, express concern over the ripping technique (or lack thereof): “bro definitely got whiplash after that one” and “man was so aggressive with it.”

In a truly impressive edition of the challenge, user @kevincandeau shows off a pair of scrubs being used as a napkin. Users under the video wrote “bruhhhhh scrubs are expensive” and “Scrubs aren’t easy to rip! You’ve been training your whole life for this” on the video which gained 896.9K views and 63.1K likes.

If you’re feeling brave and have a friend or two who’s willing to help you, the Napkin Challenge can be recreated in your own space. The real question is, will you be the napkin retriever or the napkin wearer?