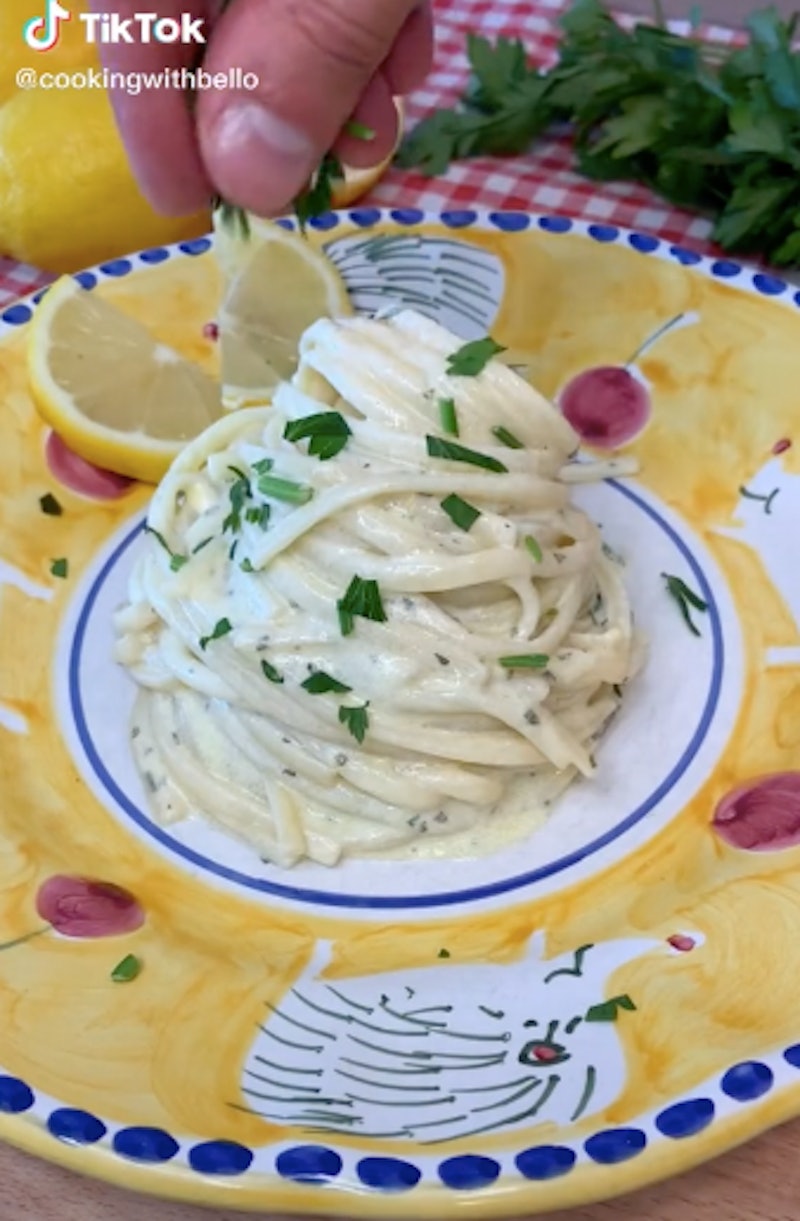 TikTok/@cookingwithbello
By Emma Garza
May 13, 2022

Among the virtual smorgasbord of satisfying videos on TikTok, there is a community of dedicated foodies who are creating content that is equal parts educational and downright entertaining. A shock to literally no one is that the hashtag #Pasta has amassed a whopping 15.8 billion views on TikTok. Viewers are lucky because thanks to the booming noodle society on the app, there is never a shortage of gooey, buttery pasta dishes to recreate at home if you’re eager to spice things up in the kitchen.

Think back to April 2020 when supermodel Gigi Hadid posted a tutorial for spicy vodka pasta on her Instagram story and subsequently started a viral trend that would boom on pretty much every social media platform, especially TikTok (which became the world’s most downloaded app during the first quarter of 2020 with 315 million downloads in that period alone).

Then there was the baked feta pasta of Jan. 2021 which quickly gained traction and was even made into a goat cheese version (recipe below). Social media-famous plates aside, pasta is simply a staple for its relatively quick cooking time and sheer versatility — meaning that if you wanted to, you could have fettuccine on Monday and ravioli on Tuesday without getting tired of it because hey, they taste different.

If you’re over having the same old spaghetti twice a week for din, look no further because here are eight TikTok pasta recipes from #PastaTok that are proven to take your nightly noodles to the next level.

For anyone who loves a little bit of citrusy zest, this creamy lemon pasta is something of a dream come true. User @cookingwithbello details his recipe for the dish in his Sept. 2021 TikTok video, which now has 1.7 million views. The recipe mainly consists of linguine, lemon, heavy cream, and fresh garlic cloves for a light, yet flavorful plate of sheer happiness. Buon Appetito.

Not Your Mother’s Buttered Noodles

As a quick late-night meal (or TBH, just a normal day’s lunch), buttered noodles are and will always be the move. This childhood favorite with a twist is probably the most effortless of them all to whip up, being that the only extra ingredient here is some good ol’ chicken bouillon — as recommended by user @britscookin. Add some parsley and fresh parmesan to taste and you’re set.

If you’re craving something more filling, this one-pot Tuscan pasta by @halfbakedharvest is loaded with chicken, veggies (hello, spinach and sun-dried tomatoes), and the creamiest sauce made with butter and cream to tie it all together. The best part? You can cook everything in just one pot so there’s minimal kitchen mess.

At least one form of spicy vodka pasta had to make it on this list and this tutorial by @matthewinthekitchen is one for the books (ahem, your Favorites tab). Rich with garlic, shallots, and red chili pepper flakes, this tomato cream pasta can also be infused with vodka to balance out the taste to perfection.

This take on the TikTok-famous baked feta pasta is worth a try, especially if you’re not a huge fan of feta cheese. User @feelgoodfoodie simply swapped out the block of feta for goat cheese, which has a lighter taste and fluffier texture. P.S., commenters even suggested trying this recipe with mozzarella — a concept.

This giant spinach pesto fusili is more on the adventurous side, but what even is pasta if not one of the more fun foods to eat? Vegan chef @chefpriyanka says in her March 12 TikTok video, “This is no ordinary pasta so this is no ordinary sauce.” Accurate, as the fusili is mega-sized and the spinach jalapeño pesto sauce officially makes this pasta dish greener than your average.

Another one-pot wonder is this oven-baked spaghetti by @fooddolls that mimics a traditional stovetop spaghetti in just one pot. Layer your uncooked pasta, spices, and sauce into an oven-safe dish before mixing in water and popping it in the oven to cook. Be sure to finish with a generous amount of cheese and bake again for a few more minutes until you have a golden, melted layer on top.

Amp up the flavor with this creamy Cajun chicken pasta that is pepper-heavy and chili flake-centric. User @moribyan starts with marinating chicken cutlets in an ultra flavorful chili powder before giving it a nice sauté. She then tosses mushrooms, red peppers, and green peppers into a hot pan, mixes with heavy cream, cheese, and seasonings before adding in the pasta. Considering how loaded this dish is, surprisingly all you need is half an hour to cook up this bad boy.

More like this
How To Make The Watermelon, Feta, & Mint Salad Trending On TikTok
By Emma Garza
Starbucks Released New Menu Items For The Summer
By Emma Garza
TikTok’s Viral “Rating Game” Is Exposing Everyone’s Icks
By Courtney Young
What Is A “Softboy?” The TikTok Term & Aesthetic, Explained
By Courtney Young
Get Even More From Bustle — Sign Up For The Newsletter