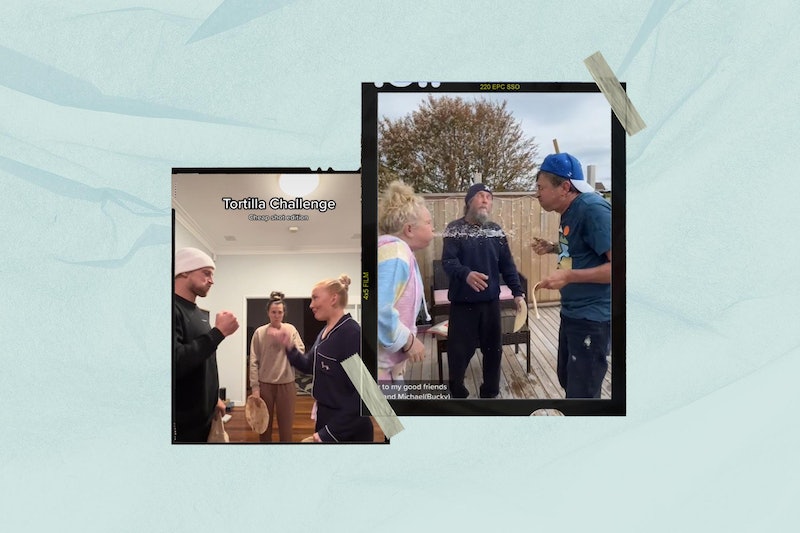 A new viral challenge is making waves on TikTok, and everything you need to play is likely already waiting inside your fridge. The tortilla challenge involves two people filling their mouths with water, play a round of rock, paper, scissors, and slap each other with soft tortillas, whoever spits out the water in uncontrollable laughter loses. The tag #tortillachallenge on TikTok has more than 259M views.

These videos are objectively hilarious, which lends itself to the trend’s virality. Tortilla challenge videos rack up millions of views and likes, with comments like, “this is the best kind of chaos,” and, “how many times have you watched this? Me: yes.” It’s hard to pinpoint the funniest moment of these videos. Is it when the two players stand at the ready, with a soft tortilla flopped at their sides? Is it when the tortilla flatly slaps across their face? Is it when the players inevitably spit an entire mouthful of water on the other? Is it when one player swings their tortilla a little too hard? Perhaps it’s all of the above.

One user, @mattmikhaila, participated in the tortilla challenge with his wife, to the tune of 9.5M views, 1.2M likes, and nearly 9,000 comments like, “she took out 25 years of anger in that one slap.”

Another user on the app, @katrina_ashleighh, gained a whopping 61M views on her tortilla challenge video, collecting 7.7M likes and more than 81,000 comments like, “this better go viral,” and “nah this is the best one.” In her video, one player goes for a cheap shot, slapping the other with a tortilla before initiating rock, paper, scissors.

User @pattysbrain101 also went viral with this trend, gaining nearly 70M views on her video. More than 98,000 comments have been left on the video, the top comment reading, “on [America’s Funniest Home Videos] in the ‘90s this would have been runner up to [a] kid taken out by [a] running dog but here it can wear its true crown.”

Another viral user, @miiraib, earned nearly 9M views on her tortilla challenge take, with more than 42,000 comments like, “the silence was too loud,” and “that last one was personal.”

Whether you’re looking to go viral, have a bit of fun, or pursue some harmless revenge, it all starts with a tortilla. Join the millions of TikTok users playing or laughing along with a mouthful of water.

More like this
What Is A “Softboy?” The TikTok Term & Aesthetic, Explained
By Courtney Young
Here’s Why Everyone On TikTok Is Getting “Krissed”
By Courtney Young
How To Make Your Own Dall-E AI-Generated Art Meme
By Emma Carey
TikTok’s Viral “Rating Game” Is Exposing Everyone’s Icks
By Courtney Young
Get Even More From Bustle — Sign Up For The Newsletter