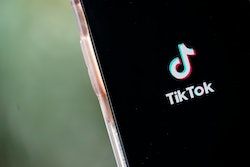 TikTok transitions — short effects between one scene and another — are hard to pull off. But when they're smooth, they're impressive — and all your followers will be praising you for your transition skills. You might use a transition to cover up you saying the wrong word, juxtapose two different scenes like a before and after, or switch between different characters speaking. Read on to learn how to do a TikTok transition.

As of 2020, TikTok has eight different transitions available on the app — Turn on TV, Turn off TV, Slip, Scroll, Horizon, Vertical, Rotate, and Circle. Turn on TV and Turn off TV make it seem as if a scene is ending or beginning the way you turn a TV on or off. Slip makes it so your video looks like it's being moved to the side to the next video. Scroll is a transition that makes it seem like you're scrolling to one scene, the way you would scroll through your TikTok feed. Horizon resembles the way a landscape looks: it pixelates your video into a horizontal line. Vertical does the same thing, just with a vertical line. Rotate spins your video around before playing. Circle spins it around and emphasizes a circle in the middle of your video.

To add a transition, open up the TikTok app and hit the plus sign at the bottom center of your screen to create a video. You can record a new video or upload one saved on your phone. Once you decide which video you want, edit the length and tap Next to get to the editing interface.

Here, tap Effects at the bottom, left of your screen. At the bottom of the screen, you'll see different tabs for different ways to change your video. Select the third tab, which says Transition.

If TikTok's in-app transitions aren't what you're looking for, you could always use third-party editing apps like BeeCut, Funimate, or Videoshop — all apps made for editing TikTok videos.

Once you have a way to shift from one scene to the next, you're good to go. Now all that's left to do is perfect your dances.