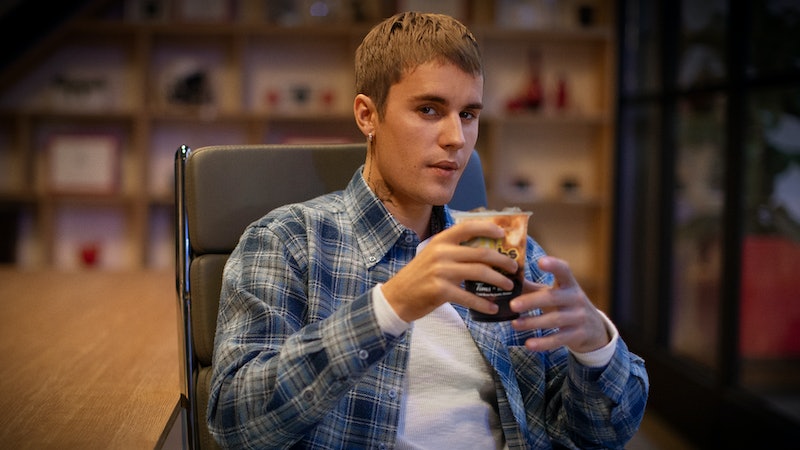 Celebrity food collaborations don’t seem to be slowing down anytime soon (no complaints here), and yet another beloved partnership is launching new items just in time for summer sipping. Justin Bieber has always been prideful of his Canadian roots which makes his collab with Tim Hortons virtually self explanatory. Last fall the pair worked on donut holes in creative flavors and now a French vanilla cold brew will be available for a Bieber-approved pick-me-up.

In Nov. 2021 Bieber and Tim Hortons announced their first project together — Timbiebs Timbits. The donut holes were inspired by Bieber’s favorite flavors and the lineup included chocolate white fudge, sour cream chocolate chip, and birthday cake waffle. Starting on June 6 the French vanilla cold brew made in collaboration with the hit artist will be on the menu at Tim Hortons locations in Canada and the United States.

According to press materials, the beverage was thought up when Bieber shared he prefers to drink his coffee over ice. He also loves vanilla flavor, so a French vanilla cold brew seemed like a no brainer. The beverage will be on menus and is aptly called the Biebs Brew. In the hilarious commercial for the new menu item, Bieber is seen camping out at Tim Hortons HQ as the cold brew steeps for 16 hours. As for getting your hands on the singer’s treats and caffeinated drink without having to camp out yourself, here’s everything you need to know.

When Can You Get The Biebs Brew From Tim Hortons?

What Does The Justin Bieber & Tim Hortons Collab Include?

Along with the all-new “Biebs Brew,” a French vanilla cold brew, Bieber has worked with Tim Hortons on a collection of Timbits (donut holes). The flavors include chocolate white fudge, sour cream chocolate chip, and birthday cake waffle.

How Much Does The Biebs Brew Cost?

While prices vary depending on drink size and location, fans will be able to claim a $5 Biebs bundle when they purchase through the Tim Hortons app. This deal gets you a large brew and a 10-pack of Timbiebs for just $5.

Like Mr. Bieber, I too enjoy my coffee over ice so was pleased to know this collaboration with Tim Hortons was helping me kick start iced coffee season. That being said, the brew is a delightful combination of subtle coffee flavor (it really is steeped for 16 hours to enhance the flavor) and a touch of vanilla without being too strong. Iced coffee drinkers will definitely consider this their go-to while it’s available.

More like this
This TikTok Hard Seltzer Hack Involves A Milk Frother
By Alexis Morillo
Is The Insta-Famous Always Pan Actually Worth It?
By Jessica Goodman
Taco Bell Announced A Crunchwrap & Tostada Made With Cheez-Its
By Emma Garza
Starbucks Released New Menu Items For The Summer
By Emma Garza
Get Even More From Bustle — Sign Up For The Newsletter