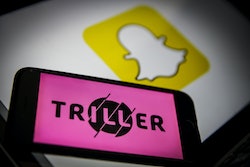 With more than 2 billion all-time downloads, TikTok has been the most downloaded app in the App Store for quite some time now. But with a ban in India and potential TikTok bans in both Australia and the U.S. over privacy concerns of the China-based company, the app may soon see a major decline in usage. So who are we to turn to for all our dance challenges, makeup tutorials, and mini-cereal recipes? For some major TikTok stars stars, like Josh Richards, Griffin Johnson, and Noah Beck, the answer is the Triller app.

Triller is a music video app that's blown up into a social networking platform. The app was originally released in 2015 by the Disney Frozen: Karaoke app creators David Leiberman and Sammy Rubin. Triller allows users to create a mini music video by recording multiple different scenes attached to the same song snippet and then automatically edits them together in a random sequence.

How Do You Make A Video On Triller?

To make a Triller video, open up the app and tap one of the addition signs on the screen. Then, you can choose from a list of popular hit songs to set for the audio of your music video. Once you know what song you want, choose a small part of the song that you want to work with. After this, all you have to do is shoot different takes. Once you've finished recording, tap the circle icon at the bottom right of your screen and you'll have an edited music video right at your your fingertips.

How Many People Use Triller?

Triller brings in about 64 million active users a month, with a total of 130 million all-time downloads, according to The Los Angeles Times. While this is an impressive number, it still shies in comparison to TikTok's 2 billion estimate — though Triller does not consider TikTok to be a direct competitor as the app is geared toward an older audience, The Los Angeles Times reports. But if TikTok gets banned or more creators leave the app, the demo on Triller could change.

In March of this year, Triller collaborated with Snapchat and created a way for users to create content on Snapchat using songs available on both apps and then post to their "Triller story." This way, Triller has a method of reaching Snapchat's 250 million daily active users.

How Does Triller Differ From TikTok?

At their core, the two apps were created for different reasons. Triller was originally designed to be a music video app while TikTok was created as a similar app as Musical.ly but then absorbed Musical.ly and then eventually turned into a platform for short-form entertainment. But aside from that, one of the biggest differences between Triller and TikTok is that TikTok has an editing interface while Triller edits videos for the user. This changes the level of involvement each user has with the videos they post on the apps.

With chance of a TikTok ban coming, only time will tell what this means for the future of the two apps and hundreds of millions of users.

More like this
How To Turn Off TikTok Profile Views So You Can Stalk Other Accounts In Secret
By Alexis Morillo
Ashamed Of Your Screen Time Stats? Here's How To Change That
By Alexis Morillo
Samsung's New Phones Have Amazing Cameras & Come In 8 New Colors
By Alexis Morillo
Everything You Need To Know About The Samsung Galaxy S23 Ultra’s New Camera
By Alexis Morillo
Get Even More From Bustle — Sign Up For The Newsletter
From hair trends to relationship advice, our daily newsletter has everything you need to sound like a person who’s on TikTok, even if you aren’t.