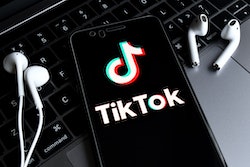 So many times, things start trending on social media apps so quickly that it's difficult to even tell where they come from. And if you're not completely up-to-speed with social media lingo, it can also be hard to tell what these trends even mean. A more recent trend is the finger point emojis touching on TikTok. If you've seen this trend in captions or even recreated with real people in videos, you've probably wondered what it means.

Lucky for all of us who may be out-of-the-loop, Know Your Meme is there to the rescue (as always). According to the site, which is a database that gives meanings on popular memes, this is known as the Two Fingers Touching meme. This is created by taking the index finger emojis and pointing them toward each other. Know Your Meme reports that this is used to indicate "shyness" or "hesitation" before asking a question, usually in a jokingly way to portray someone flirting or feeling sensitive. In fact, sometimes people even use the Pleading Face Emoji in between the fingers to make it more apparent that the question is being asked with a "puppy dog face" or in a nervous demeanor.

While there are different theories as to where the trend came from — Know Your Meme guesses a picture of a man doing the action which turned into a meme as the origins — what is sure is that the trend has taken off. But now you know what it means, so the next time you see the two fingers pointing at each other, you won't be scratching your head in confusion.

More like this
Behind The Hilarity Of The "POV: You Walk Into My Room" TikTok Trend
By Lexi Inks
How To Turn Off Night Mode On Your iPhone Camera
By Emma Carey
Here's How To Get Your iPhone To Update Automatically Forever
By Emma Carey
26 Ghost Story Podcasts To Get You Ready For Halloween
By Jessica Booth, Mia Mercado, JR Thorpe and Emma Carey
Get Even More From Bustle — Sign Up For The Newsletter