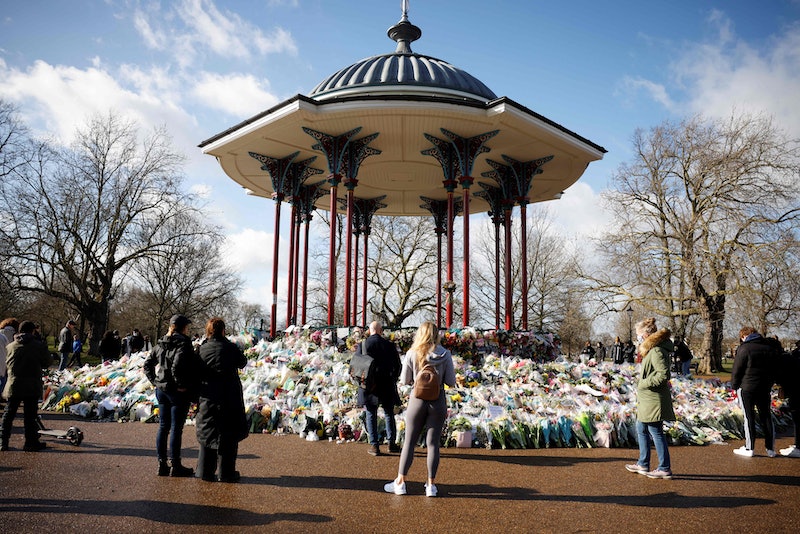 Trigger warning: This article contains references to sexual assault, violence, and death, as do many of its outbound links.

On Sept. 29, Susan Everard read her victim impact statement at the hearing of Wayne Couzens, the Met Police Officer who murdered her daughter Sarah while she walked home from a friend’s house on the evening of March 3.

Couzens abducted 33-year-old Sarah in South London before driving her to his house in Kent, raping and strangling her, and disposing of her body in nearby woodlands. His two-day sentencing hearing began yesterday and prosecutor Tom Little QC has said that the firearms officer could face a whole life order, meaning that he will never be eligible for parole.

Appearing at the Old Bailey for the sentencing, Everard’s family offered their victim impact statements in front of Couzens. “Sarah is gone and I am broken-hearted,” Sarah’s mother Susan told the court. “She was my precious little girl, our youngest child. The feeling of loss is so great it is visceral. And with the sorrow comes waves of panic at not being able to see her again.”

Susan went on to describe how she remains “tormented at the thought of what she endured,” and that she continues to “go through the terrible sequence of events” wondering when her daughter realised “she was in mortal danger” before explaining that her daughter “spent her last hours on this earth with the very worst of humanity.”

She continued, “She lost her life because Wayne Couzens wanted to satisfy his perverted desires … He treated my daughter as if she was nothing and disposed of her as if she was rubbish.”

Sarah’s father and older sister also confronted Couzens, with Jeremy Everard asking his daughter’s murderer to look at him as he gave his statement. “The impact of what you have done will never end,” he said. “The horrendous murder of my daughter, Sarah, is in my mind all the time and will be for the rest of my life.

“A father wants to look after his children and fix everything,” he continued, “and you have deliberately and with premeditation stopped my ability to do that … I can never forgive you for what you have done, for taking Sarah away from us.”

Sarah’s sister Katie told Couzens that he treated and disposed of her little sister “like she was nothing” when “she meant everything” to them. “I feel like I live in a make-believe world, as if nothing is real,” Katie said. “I have to pretend because the thought of not having Sarah forever is too hard to bear. A lifetime now seems a very long time.”

You can read the statements in full here.

More like this
Footballer Jake Daniels Shared His Thoughts On A World Cup Boycott
By Sam Ramsden
Iran Has Issued A Death Sentence Over Mahsa Amini Protests
By Catharina Cheung, Darshita Goyal and Maxine Harrison
What To Know About Martin Bashir After Watching 'The Crown'
By Bustle UK
'Waterloo Road' Is Back, With More Than A Few Familiar Faces
By Sam Ramsden and Vivian Iroanya
Get The Very Best Of Bustle/UK