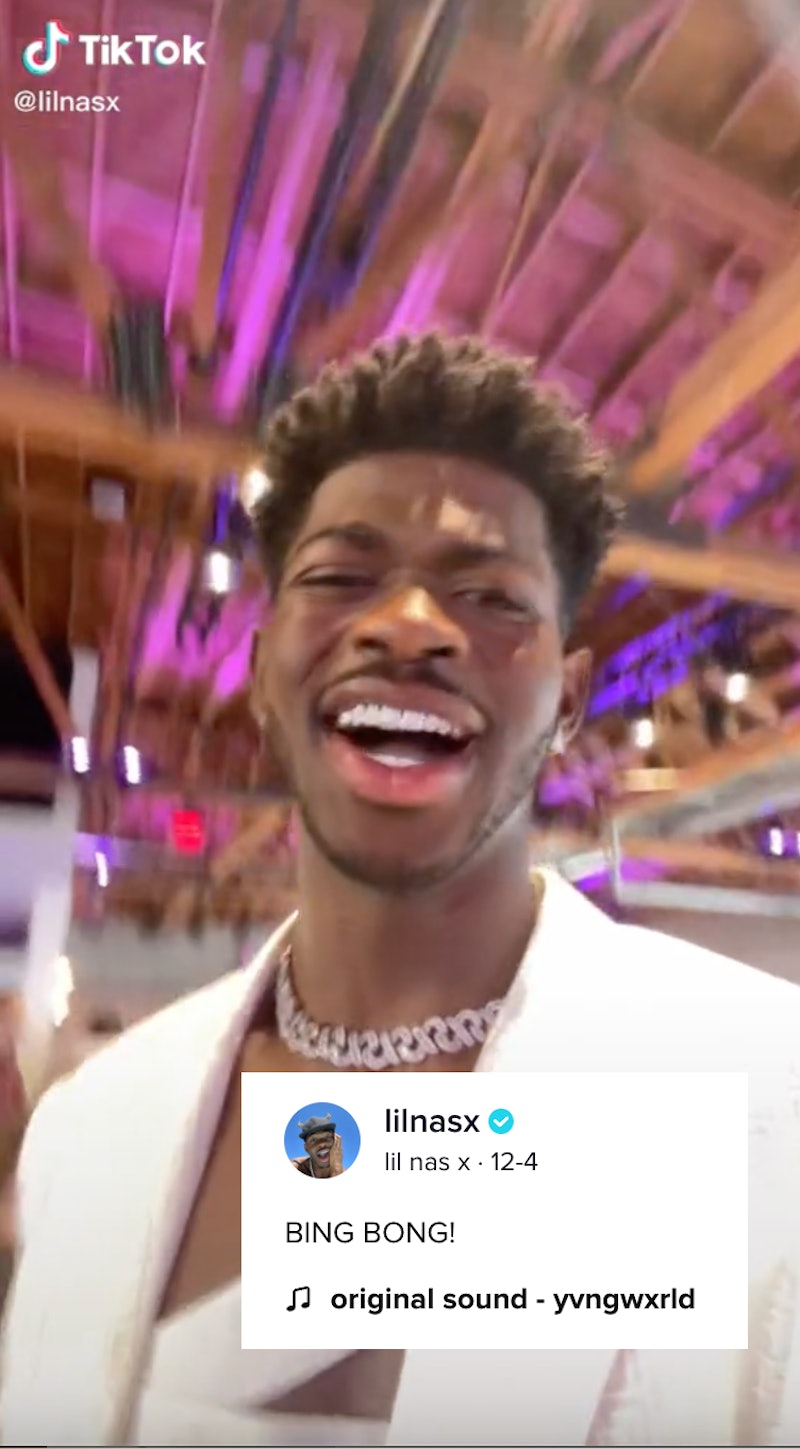 Wondering why over the last week you’ve been getting flipped off on TikTok while people lip sync to an audio aggressively shouting, “Bing Bong!”? Yeah, that might need some explaining. If you’ve been snoozing on TikTok trends, you may have missed the new-ish catchphrase that is quickly becoming the For You page’s anthem. Depending on who you ask, what “bing bong” means on TikTok is a fast-evolving concept that means nothing and yet everything.

The audio clips going viral on TikTok comee from a one-minute NYC street show featured on Instagram, called Sidetalk, hosted by Jack Byrne and Trent Simonian. The show’s intro features a quick audio of the subway doors opening, an iconic two-note-jingle that New Yorkers know by heart. (The original bing bong, if you will.) Back in April 2021, Brooklyn-based musician Gorilla Nems hosted an episode in which he introduced Coney Island’s finest. In the episode, he shouts “Bing bong!” revamping the jingle as an approving exclamation as he vibes along to what someone is saying. From there, it became his catch phrase. Fast forward to October: Sidewalk films fans after a victorious Knicks season opener, and among a jubilant salad of hoots and hollers, is a clear “bing bong.” The clip went viral first among Knicks fans as a sort of team sprit inside joke. Since then, TikTokers have gotten their hands on different Sidetalk episodes and spliced out the most memorable phrases, using them to narrate anything from makeup tutorials to baby reveals. (A word of warning for those without their headphones plugged in: The full audio is pretty NSFW.)

While Bing Bong is the star of the show, the different audio clips are rife with viral treats. In the original April video, Gorilla Nems asks a Coney Island resident who the president is, and his response — “Joe Byron” [sic] — is featured in a number of subsequent audios. (As internet culture newsletter Embedded reported, the man, TJ, is currently unhoused and a GoFundMe started to help him with living expenses has already raised over $30,000.) “What do you wanna tell Joe Byron right now?” asks Nems in another viral clip; “What’s up, baby? Take me out to dinner,” responds TJ. Another one: “What are you thankful for this Thanksgiving?” asks Nems; “Beans, rice, Jesus Christ, and Byron.”

Though the origin is clearly New York-specific, it’s since spread to all corners of TikTok. The original sound is used by over half a million videos, and clips with the the #bingbong hashtag have over 210 million views. Everyone from Lil Nas X to the Duolingo Owl and Trader Joes employees are acting out the seven-person chorus of mashed up phrases form the now iconic Sidetalk episode. There’s Bing Bong Ten Commandments, created by Nems — to use the phrase, you must have taken the subway at least 25 times in your life and during rush hour. There’s even Bing Bong merch.

You don’t have to be from New York to appreciate the absurdity of “Bing Bong” TikTok, but at least now you know what everyone’s referencing.

More like this
Ashamed Of Your Screen Time Stats? Here's How To Change That
By Alexis Morillo
How To Turn Off TikTok Profile Views So You Can Stalk Other Accounts In Secret
By Alexis Morillo
Learning To Love, Not Judge, The Lunchbox Wives Of TikTok
By Esther Zuckerman
11 Super Bowl Instagram Captions To Use On Game Day — Even If You Don’t Like Sports
By Alexis Morillo
Get Even More From Bustle — Sign Up For The Newsletter
From hair trends to relationship advice, our daily newsletter has everything you need to sound like a person who’s on TikTok, even if you aren’t.