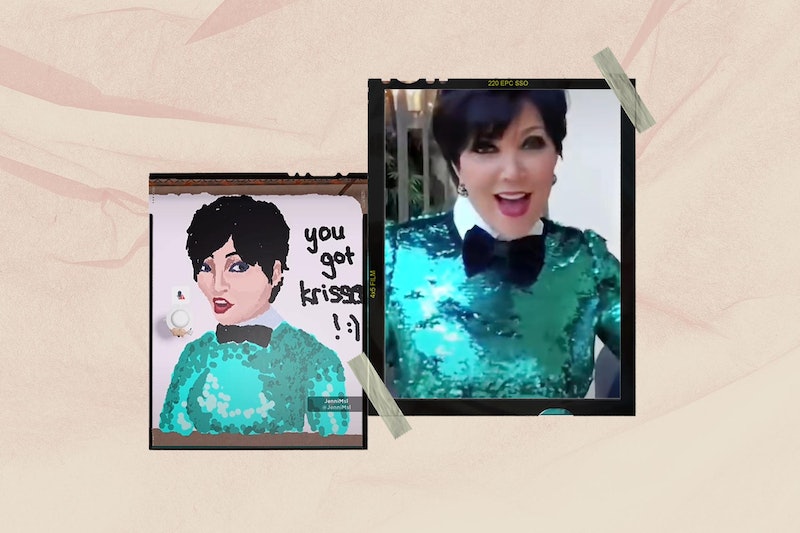 Kris Jenner, the famous Momager to the Kardashian family, has found herself at the center of an internet conversation that she did not facilitate. This week, a new TikTok trend dubbed “getting Krissed” is all over the app. On TikTok, the tag #krissed has more than 545M views. The viral trend features a clip of Jenner from a 2012 YouTube video of the famous family lip-syncing “Lady Marmalade,” originally posted on Kendall and Kylie’s now defunct YouTube channel.

The trend is about the element of surprise, with the end goal of jumpscaring users with the clip of Jenner. The clip is often inserted hastily into the end of a TikTok to surprise the viewer, and some even bait users with false claims about other celebrities to grab attention – think, a Kendall Jenner pregnancy announcement or a Tom Holland x Zendaya proposal – only to mid-way switch to the clip of Jenner. In this way, getting Krissed is the Rickroll of the ‘20s.

In 2008, Rickrolling was the meme of the year. Almost identical to the Krissed trend of today, Rickrolling was a bait and switch internet joke that surprised unsuspecting scrollers with the music video for Rick Astley’s “Never Gonna Give You Up.”

This trend is hugely popular among students and younger TikTok users who likely have never heard of the Rickroll phenomenon. One user, @stopkrissjenner, shared a video to TikTok of them Krissing their classmates, airdropping the clip to everyone in close range. With 8.7M views, 1.6M likes, and more than 42,000 comments, the video is one of the more viral hits in the trend. The video has collected comments like, “I’ve been krissed 15 times in the last 30 minutes.”

One user, @shesjustsadig, gained 9.1M views and 1.7M likes on her video, which initially claimed that Kris Jenner had commented on the trend. The viral video begins with a doctored screenshot that appears to be an Instagram story from Jenner reading, “Hey tiktok, I would love it if you could stop krissing everyone thank you.” The video’s more than 63,000 comments echo sentiments like, “this is the first one that actually got me,” and “no cuz I bet she’d love this trend.”

@jules.m5 on TikTok spiced up the conversation with the original Kardashian “Lady Marmalade” video, collecting comments like, “Kris ate up” and “this era was lit.”

Verified makeup artist @daniellemarcan took the trend for a spin, starting her TikTok on the opposite side of the trend, reading, “if u keep getting krissed here’s a moment for u to relax,” before quickly cutting to the Jenner clip. With more than 3.8M views and 642,000 likes, the video collected nearly 20,000 comments like, “how dare you,” and “apology video with tears now.”

If you have not yet been Krissed, beware, you’re lying in wait. Those who remember the days of the Rickroll can attest that after a few weeks of the viral prank, the original song was nearly impossible to listen to. If the internet takes “Lady Marmalade” from me, I might never forgive them. So, next time you see a piece of wildly unconfirmed celebrity gossip, look out. Kris Jenner is around the corner.

More like this
What Is A “Softboy?” The TikTok Term & Aesthetic, Explained
By Courtney Young
On TikTok, Users Are Sharing Wholesome Theories About The Multiverse
By Courtney Young
Why Are TikTokers Slapping Each Other With Tortillas?
By Courtney Young
How To Make Your Own Dall-E AI-Generated Art Meme
By Emma Carey
Get Even More From Bustle — Sign Up For The Newsletter