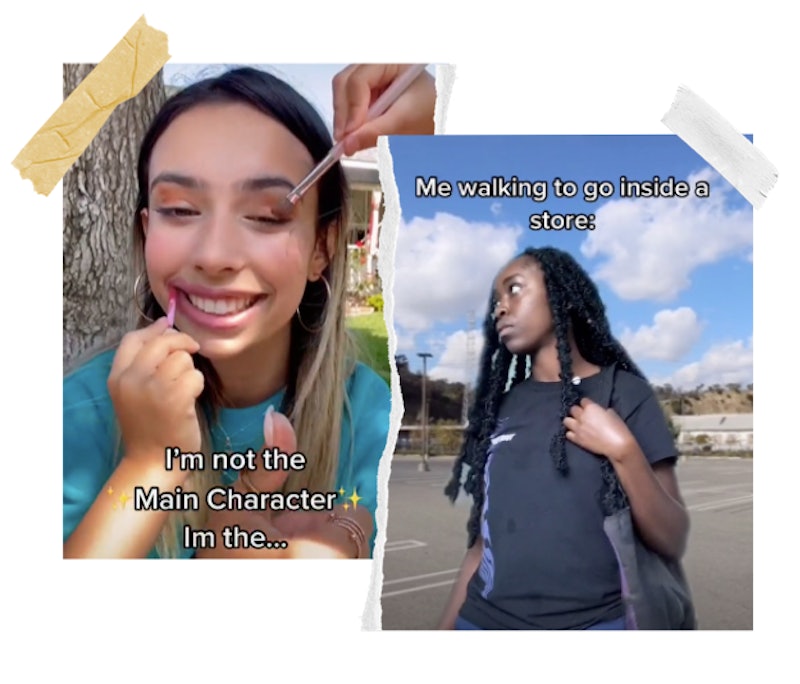 Though typically a the-world-revolves-around-me-attitude isn't one to endorse, this trend is about self-love at its core. It started out as a hashtag (which now has over five billion views) and has evolved into a popular meme format, where TikTokers film themselves longingly looking at vast expanses, dancing in the rain, or being stared at in a store — as, well, a main character does. You might hear these videos soundtracked by any of the many "romanticizing your life" sounds, or a clip of "Mariners Apartment Complex" by Lana del Rey.

Actor and creator Yasmine Sahid's main character videos on TikTok have amassed millions of views. She attributes the success of her videos, which she says she made to "humble" herself, to the universality of the need to be seen as successful. "We all want to be the main character of our town and we all want to show our old high school classmates that we’re living our best life, even if we’re not," Sahid tells Bustle.

After a year of social distancing, going back to your hometown for summer vacation might feel like even more of an opportunity to debut a new you than usual. "No matter how hard you deny it, there’s a little bit of yourself that wants to prove you’re no longer the same kid from high school and that you’re doing big things," says Sahid. Licensed psychologist Amy Jane Griffiths, Ph.D, N.C.S.P., tells Bustle that people might feel the need to "demonstrate [their] worthiness," particularly in the context of returning home for a visit. Taking on main character energy is one way to do that. "Create your own definition of what success means," Griffiths suggests, "and try to shift your perspective regarding the value of what others think."

But while having the most important POV might have been a priority pre-pandemic, TikTok is pivoting post-pandemic to give a little bit of love to the sidekick, the background actor, and bud of a joke, too. Videos with the hashtag #notthemaincharacter have over two million views, and feature videos of people celebrating their low-fi existence as the babysitter who isn’t good at babysitting, the older sibling with no friends, or the short one who won’t shut up. Re-casting yourself as the big-boobed sidekick or prep who’s into creepy sh*t might help to bridge the gap between who you were before 2020, and who feel you are now.