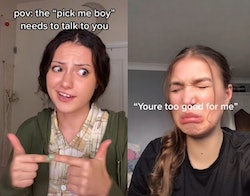 Where there is a pick me girl, a pick me boy is not far away. While the phrase is less viral than its predecessor, it’s picking up steam online among women who are tired of being the sole butt of the joke. The tag #pickmeboy has nearly 347M views on TikTok, in comparison to #pickmegirl’s 1.7B views.

If you need a pick me girl refresher, here’s what the viral term means: A “pick me girl” is someone who separates themselves from their peers with the goal of appearing different, unique, and not like other girls. Pick me boys function a bit differently, but the underlying desire for attention is the same.

According to TikTok, the pick me boy’s defining trait is performative self-loathing. He will say something like, “Why do you even like me, I’m so weird,” before asking for naked photos. A pick me boy will sigh and say, “Nice guys always finish last” at the sight of a read receipt. Urban Dictionary supports this evaluation, defining the term as, “A guy who uses self depreciation in a manipulative way so a girl will date him. They will say bad things about themselves to try to get the girl to oppose what they’ve said.”

One TikToker, @jackjos3ph, went viral for his interpretation of his pick me peers, posting multiple videos in his “pick me boy” series and racking up millions of views. His videos consistently collect thousands of comments like, “It's always the ‘you’d never go for a guy like me,’ ” and “why does this feel so familiar.”

Another user, @hannah.montoya, went viral for a “pick me boy” series of her own, with videos so painfully accurate they collect comments like, “I love your videos but I hope you understand why I simply cannot make it through this video.”

Back in February 2021, @charleyajc shared her pick me boy quips, gaining 2.1M views, 405K likes, and 18K comments sharing an alternate term for the phenomenon: “sad bois.” Her viral video plugs a few pick me boy one-liners like, “You’re too good for me,” “I’ll stop bothering you now,” and “I’m ugly anyway.”

Essentially, the pick me boy is cut from the same cloth as the pick me girl, but where the latter wants to hear “You’re so different,” the former wants to hear “You’re worthy.” Like a lot of internet satire, the roots are kinda sad. That said, the ladies of the internet have scrolled through thousands of pick me girl digs over the last few years, so let them have this one.

More like this
What Is A “Softboy?” The TikTok Term & Aesthetic, Explained
By Courtney Young
Here’s Why Everyone On TikTok Is Getting “Krissed”
By Courtney Young
Why Are TikTokers Slapping Each Other With Tortillas?
By Courtney Young
How To Make Your Own Dall-E AI-Generated Art Meme
By Emma Carey
Get Even More From Bustle — Sign Up For The Newsletter