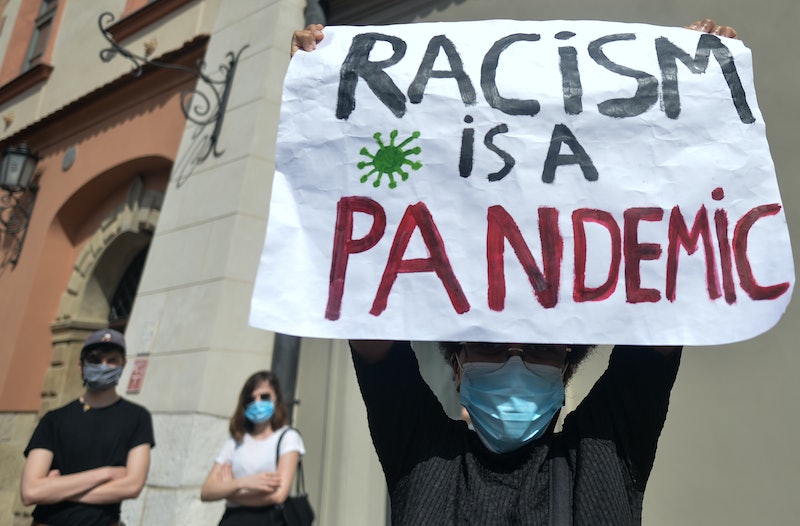 In the wake of recent killings of Black citizens, the entire landscape of social media has changed. For two months, your Facebook, Twitter, and Instagram feeds have been filled with infographics about racial disparities in the U.S., posts demanding justice for George Floyd, Breonna Taylor, and countless other Black victims of police brutality, and explainers on what it means to "defund the police." But on July 7, there is a slightly different call to action: Black Out Day 2020.

You might recall that earlier in June many social media accounts took part in #BlackOutTuesday, where people posted black squares onto their feeds with the intention of showing their solidarity with the Black Lives Matter movement. This action was quickly knocked down as performative, and was even deemed as harmful to the movement as many people who use the hashtag "#BlackLivesMatter" on their black square ended up pushing down all of the important information about resources and protests on Instagram's algorithm.

But on #BlackOutDay2020, organizers are asking supporters of the BLM movement to take it a step further from just posting black squares and put their money where their mouths are — and that is anywhere but big companies.

In 2018, Nielson released a report stating that Black consumers spent $1.2 trillion in one year alone. That's a lot of buying power. #BlackOutDay2020 recognizes the buying power of the Black community and encourages them to come together to use that power — or rather, not use it. July 7 is an economic protest that asks Black people (as well as their allies) to refuse to spend their money at all. Calvin Martyr, the founder of the event, specifies in a video that Black people should not be spending any money, “not online, not on Amazon, no fast food places, no restaurants, no stores.” While it is obvious that the U.S. government has consciously neglected the blatant racism occurring in its own country, #BlackOutDay2020 asks people to hit them where it hurts — in the economy.

How Can You Participate

Don't go shopping, refrain from ordering food, and try not to spend a single dime on July 7. If you must purchase something, do it from Black-owned businesses. The message of #BlackOutDay2020 is that while Black lives seem to always be overlooked and cast off by U.S. systems, they still hold tremendous powers within the nation. But if you're going to participate in Black Out Day 2020, don't just refrain from spending money — that's just the first step.

While the day is meant to show the economic solidarity of the Black community and its allies, its main point is to get the attention of the U.S. administrators that refuse to hear them out. So while you're keeping your pocketbook closed, you have to take it a step further to make the day truly fruitful. Raise awareness on your social media accounts on why you're participating, share petitions, post infographics, provide actionable steps toward getting justice for the Black people who have been murdered. Protest the systems in place that are set up to keep Black people down. While thinking about where your money goes is important to the movement, it's what you do afterward that counts the most.

What Can You Do Once The Day Is Over

While boycotts are important, July 7 is just one day. The work you do after Black Out Day 2020 is significant as well. Continue to raise awareness on Black issues, learn more about racial injustice in the country, and keep on fighting the good fight. The work doesn't stop until everyone in the country is free.

More like this
25 Inspiring Quotes From Black Women To Celebrate Black History Month
By Kyli Rodriguez-Cayro and JR Thorpe
15 Black-Owned Liquor & Wine Brands To Add To Your Bar Cart
By Alexis Morillo
These Artists Are Reimagining Black History Month To Create A Better Future
By Katie Mitchell
11 Super Bowl Instagram Captions To Use On Game Day — Even If You Don’t Like Sports
By Alexis Morillo
Get Even More From Bustle — Sign Up For The Newsletter
From hair trends to relationship advice, our daily newsletter has everything you need to sound like a person who’s on TikTok, even if you aren’t.