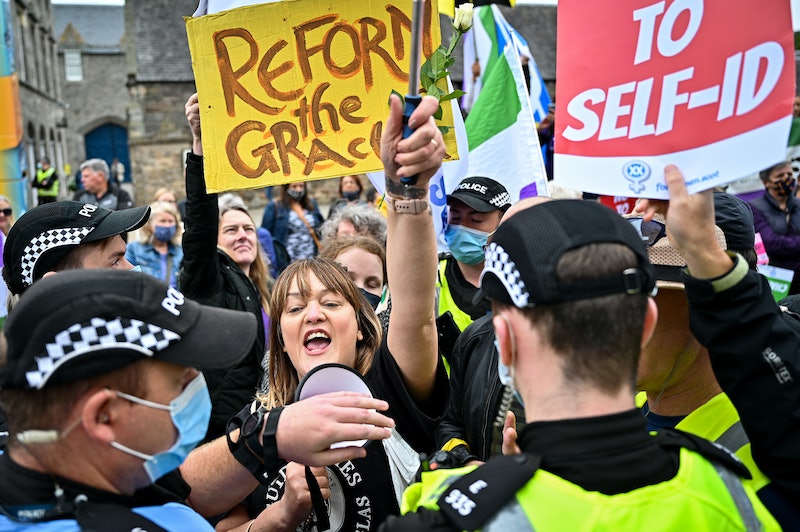 In September 2020, the government announced a handful of reforms to the Gender Recognition Act, which was initially established in 2004.

This came after years of consultation with trans and non-binary people as to how changes to the act can be beneficial to them, only to be met with changes that do “little to remove significant barriers to gender recognition,” as noted by the Rainbow Project.

In response, the cross-party Women and Equalities Committee opened an inquiry into the government’s “failings” in October 2020 to address the issues trans and non-binary people face under the Gender Recognition Act, and what can be done to improve it.

On Dec. 21, 2021, the committee published a report of their findings, and are urging the government to make more meaningful reforms to substantially change the act and what it can mean for those affected by it.

What Is The Gender Recognition Act?

Established in 2004, the Gender Recognition Act (GRA) came into effect in 2005 and gives trans people the right to change their legal sex on a birth certificate. However, the process to do so has been described as “invasive, dehumanising, and lengthy” according to charity EachOther UK, with applicants being treated as though they have a mental illness.

As explained by EachOther UK, applicants have to be at least 18-years-old and are assessed by an anonymous medical panel for gender dysphoria before applying to change their legal sex, and must provide evidence that they’ve lived under this gender for two years.

Non-binary people are forced to choose between male and female when listing gender on a birth certificate, and spouses can prevent an applicant from acquiring their right to gender recognition, and thus potentially enabling abusive and controlling behaviour.

In 2016, the Women and Equalities Select Committee gathered evidence from trans people to encourage the UK government to reform the GRA. Two years later, the government held a public consultation regarding proposed changes, but the results weren’t published until September 2020. According to Pink News, this was accompanied by a series of “false starts” which heightened “anxiety about the results publication.”

Where Is The Gender Recognition Act At Now?

In September 2020, then Minister for Women and Equalities Liz Truss announced a set of reforms to the GRA. These proposals included setting up three new Gender Identity Clinics (GICs), moving the process to apply for a Gender Recognition Certificate (GRC) online, and lowering the fee for this process from £140 to £5.

These reforms were not met with a positive response, with Stonewall writing that the government “has committed to making small, administrative improvements to the process of legal recognition” rather than de-medicalising the process of legally changing one’s sex, and implementing a self-declaration process which is already in place in the Republic of Ireland, Norway, and Argentina.

The Women and Equalities Select Committee subsequently opened an inquiry to hold the government accountable “for falling short in its reform of the Gender Recognition Act”. On Dec. 21, 2021, the committee published a report on why it launched the inquiry, and what can be done to solve the issue.

The report revealed that the Government Equalities Office (GEO) and the Equality and Human Rights Commissions (EHRC) refused to engage with the inquiry “in a meaningful way”, and key equalities ministers Liz Truss and Kemi Badenoch also refused to attend the inquiry, which the committee says “runs contrary to ministerial code.”

Chair of the Women and Equalities Committee, Caroline Nokes MP, issued a statement which read: “The GRA is crying out for modernisation, and the Government has spectacularly missed this opportunity. The Government’s failure to implement even these changes – made clear in its constitution – suggest its lack of willingness to engage.”

Nokes recommended that the diagnosis of gender dysphoria should be removed by 2023, an action plan of removing the “spousal vito” should be implemented within the next 12 weeks, and that the requirement that trans people need to have lived in their “acquired gender” for two years should be scrapped.

More like this
Here’s Where The NHS Nurses’ Strike Currently Stands
By Sophie McEvoy
Gen Z Are Twice As Likely To Identify As Queer, According To New Data
By Sam Ramsden
Pret & Costa’s Coffee Is The Strongest On The High Street, According To Which?
By Sam Ramsden
Eurovision Has Been Given A Whole New Look Ahead Of Its Liverpool Debut
By Bustle UK
Get The Very Best Of Bustle/UK
Sign up for Bustle UK's twice-weekly newsletter, featuring the latest must-watch TV, moving personal stories, and expert advice on the hottest viral buys.