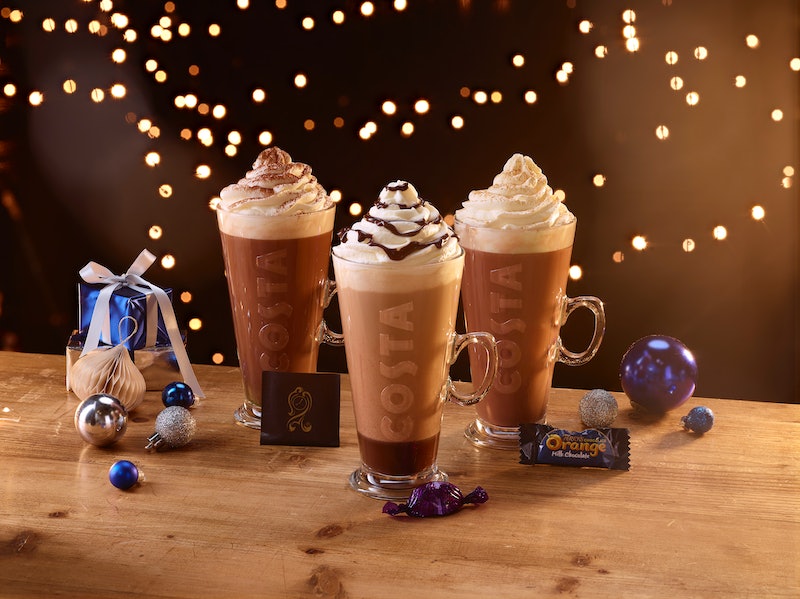 Easter may be the reigning holiday for chocolate, but nothing beats seeing tins galore of all your Christmas chocolate faves in the local supermarket. But what if these delicacies were combined with coffee? Well, leave it to one of the UK's best-loved coffee chains because the Costa 2020 Christmas menu includes three new drinks inspired by some of Britain's favourite chocolates.

Forget the Quality Street tin, After Eight mints, and Terry's Chocolate Orange slices, because from Nov. 3 you'll be able to experience these beauties in lattes and hot chocolates. On the caffeine side of things, the popular Purple One from Quality Street makes its debut as a latte with "a rich caramel chocolate sauce and roasted hazelnut syrup," Costa writes in a press statement, accompanied by a "light dairy swirl with a moreish caramel chocolate sauce" to top it all off, along with a Purple One chocolate.

On the hot chocolate front, Costa has infused peppermint and orange syrup into two beverages inspired by the flavours of After Eight and Terry's Chocolate Orange. As with the latte, both these drinks come with their respective After Eight thin and Terry's Chocolate Orange slice. Not only that, but the Irish Velvet Frostino is also making a return, and there's also a Black Forest Chocolate Frostino to enjoy as well as the winter warming Hot Spiced Apple.

If you're on the go, Quality Street's The Purple One will also star as a hot chocolate with caramel sauce and hazelnut syrup, available exclusively at Costa Express machines and Shell locations. This limited-edition hot drink will be joined by the Terry's Chocolate Orange Hot Chocolate.

"This year, more than ever, we wanted to ensure we make Christmas feel that little bit more magical, every sip of the way," a spokesperson for Costa said. "So we're exceptionally pleased to offer returning and new Costa Coffee lovers these soon-to-be iconic additions, plus their classic favourites too. Now to the tough decision of choosing which to try first!"

Terry's Chocolate Orange Muffin will be making a reappearance, accompanied by an After Eight Muffin filled with peppermint sauce. Costa will also be serving a brand new Rich Chocolate & Hazelnut Shimmer Cake for fans of The Purple One, as well as a Lotus Biscoff Cheezecake.

The Santa-themed vanilla sponge Jammin' in the Chimney muffin is a new addition, and so are the Crispy Chocolate Stars made with chocolate and caramel crispy rice stars coated in white chocolate.

On the savoury side of things, Costa has unveiled the decadent Lobster Toastie alongside the festive British Pork & Bramley Apple Sausage roll or British Turkey & The Trimmings Toastie. There's also the showstopping Vegan Turkee, Cranberry & Stuffing Bloomer to dig into as well.