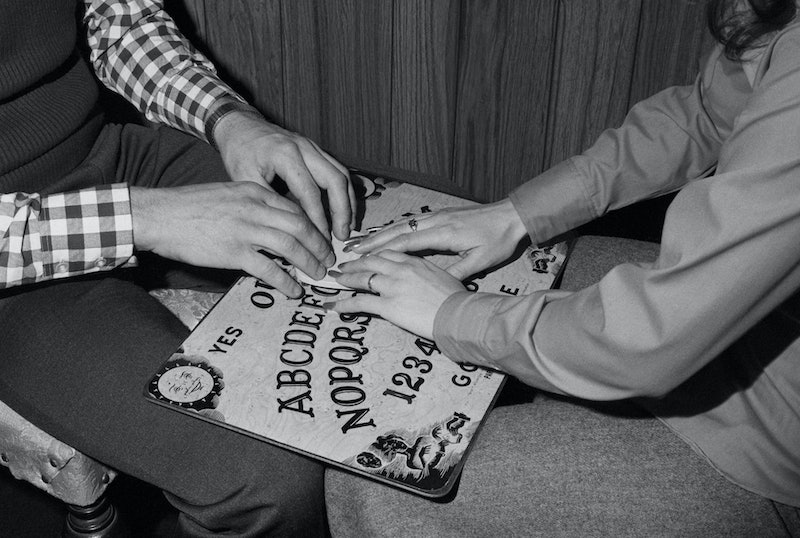 If you believe that simply becoming aware of something spooky can somehow conjure it into existence, an introduction to the Ouija board demon Zozo is going to give you a hefty dose of the creeps. According to internet legend, Zozo is an ancient, mysterious demon with foggy origins who communicates with people via Ouija board. His preferred style of communication is expressing grim threats through the planchette, though he is also said to be known for making ghoulish sounds, breaking things, and instilling fear for fun in those that conjure him. You'll know you've awoken the craggy old spirit when he spells out his name, Z-O-Z-O.

First introduced to the internet via a 2009 public message board, in a post written by an ex-Ouija enthusiast named Darren Evans, Zozo has now become a horror fanatic favorite on Reddit, and deemed worthy of its own episode of Ghost Adventures on The Travel Channel. In the episode, Evans and a paranormal crew head back to the scene of the haunting, his ex-home in Oklahoma where he and his family claim to have been tormented by the demon — culminating in a move prompted by his daughter allegedly becoming temporarily blind after an interaction with the spirit.

Evans, who became a self-proclaimed "Zozologist," after penning The Zozo Phenomenon in 2016, and appearing on podcasts and horror sites regularly, says that interactions with Zozo start out unconcerning, but eventually become more and more malevolent. In his alleged firsthand experience, it started with flickering lights, and then progressed to moving objects, sounds in the night, and escalated to scratches on his skin, and a brush with death when his daughter claimed to see the spirit in the tub with her, before she went blind and limp temporarily.

Evans' blog, which not only chronicles his own experiences with the mysterious demon, but features Zozo stories submitted by readers, is said to serve as a warning of the dangers in underestimating the power of a Ouija board. Back in 2009, Evans believed he was the first person to have an interaction with the malevolent spirit — but after posting the story, others came forward with similar experiences, making Evans wonder if perhaps Zozo's reach was beyond his own personal torment.

Zozo has since become even more of a cult internet phenomenon. And over a decade later, message boards continue to feature claims of Zozo conjurings and YouTube videos featuring Zozo stories continue to amass millions of views. Despite the fact that the story behind Zozo remains vague, and the hauntings remain void of actual evidence, the people of the internet are very happy to keep the legend "alive" — especially around Halloween.

If being scared is fun for you, you can watch I Am Zozo online. And if you've already pulled out the Ouija board, remember that dragging the planchette to "Goodbye" will end your session if it becomes too spooky — though if you believe Evan's account, this demon is not particularly respectful of salutations and requests. But if you're anxiously turning on lights and looking over your shoulder, you can avoid this demonic entity entirely by avoiding the Ouija board — it's apparently his only vessel to the living realm.

This article was originally published on Oct. 9, 2018