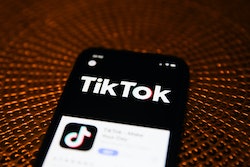 If you're an avid user of TikTok, recent news about the TikTok ban probably came as a tough blow.

Conversations about the ban first began when Secretary of State Mike Pompeo spoke with Laura Ingraham during a Fox News interview. He said that the U.S. was taking the matter seriously and that people should only download the app if "you want your private information in the hands of the Chinese Communist Party." Since Pompeo's conversation with Ingraham, there have been ads put out by the Trump administration to sign petitions to ban TikTok. And on July 20, the U.S. House of Representatives voted to ban the app from all government-issued phones.

As of September 18, Reuters reported that Trump will block any new TikTok and WeChat downloads in the U.S. starting September 20. However, some good news is that the ban will not prevent U.S. companies, like Starbucks and Walmart, from doing business transcations with WeChat, according to Reuters' report.

For the billions of users who already have TikTok on their phones, they can continue using the app, but any updated versions will no longer be downloadable, according to CNN. In an interview with Fox Business, Commerce Secretary Wilbur Ross said, "The only real change as of Sunday night will be [TikTok users] won't have access to improved apps, updated apps, upgraded apps or maintenance."

But what is it about an app that's brought you your favorite dance challenges, tiny-cereal trends, and makeup tutorials that's worth banning?

What's The Reason Behind The TikTok Ban?

Pompeo said the concern was over the company sharing user's private data with "the Chinese Communist Party."

TikTok was created by Chinese company ByteDance, which was created in 2016. Two years later, TikTok became the most downloaded app in the U.S. And then this year, in the middle of quarantine, the app surpassed 2 billion downloads. Though the app has been in the U.S. for a while, there are some data concerns that are being brought to attention regarding the app as of late.

Because ByteDance is a Chinese company, legislators in the U.S. are worried that Chinese laws may force the company to give out users' personal data — including the users in the U.S, Vox reports.

And the U.S. isn't alone in its concerns. In late June, India banned TikTok along with other Chinese apps after tensions rose between the two countries at their Himalayan border. Australia is also considering a possible ban.

What Does TikTok Think About The Ban?

A TikTok spokesperson told CNN that the company has never and would never provide data to the Chinese government. They also mentioned that TikTok is headed by an American CEO, so there would be no reason for them to distribute data to the Chinese government. Additionally, it's been mentioned by TikTok representatives that the company stores data from its U.S. users in the U.S. and Singapore. When Bustle reached out to a TikTok spokesperson for comment, they told us, "TikTok is an app that brings joy to millions of Americans, especially during the difficult time of this pandemic. We're proud to be an authentic and uplifting corner of the internet. Our top priority is promoting a safe, secure, and rewarding app experience for our users."

Since the ban has been confirmed, ByteDance has released a comment on Chinese social media. The company said, "ByteDance has always been committed to becoming a global company. In this process, we are faced with all kinds of complicated and unimaginable difficulties, including the tense international political environment, the collision and conflict of different cultures, and the plagiarism and smear of competitor Facebook. But we still adhere to the vision of globalization, and continue to increase investment in markets around the world, including China, to create value for global users."

In a video posted to Twitter, TikTok U.S. General Manager Vanessa Pappas assured its users that "we're not going anywhere," despite the president announcing that he would ban the app in the U.S.

On July 31, Trump announced that he would be banning TikTok from the U.S., without much detail except for saying, "Well, I have that authority."

It's difficult to really determine the exact parameters of what the TikTok ban would look like, especially because it's so unprecedented in the U.S. In China, it's the Great Firewall that keeps citizens from accessing many popular apps like Facebook, Google, and Twitter. But something similar to that would totally go against the First Amendment, making it nearly impossible for the Trump Administration to ban TikTok in its entirety. What seems to be most likely is a decrease of TikTok's influence through methods already seen in some locations: the House banning the app on government-issued phones, corporations restricting their employees from having the app, and others being encouraged to delete the app. As far as anything more extreme, it's hard to tell what Trump has in mind, should a U.S.-based company fail to acquire the app. Fortunately, for American users, it appears those measures won't be coming into play as Oracle and TikTok have announced an official partnership.

On Sept. 14, multiple outlets, including the Wall Street Journal, reported the Bay-area based tech company would be partnering with TikTok. This announcement came just two days before Trump's imposed deadline. The details of the deal are still unclear as the deal between TikTok and Oracle is being called a "partnership" rather than an outright sale. There is some skepticism about what Oracle's partnership with TikTok will actually accomplish, specifically regarding the initial concerns around privacy and national security.

Microsoft initially came forward and said it was looking into buying the app. However, on Sept. 13, Microsoft announced it isn't acquiring TikTok, as their deal with ByteDance was rejected. "We are confident our proposal would have been good for TikTok’s users, while protecting national security interests," read the post on Microsoft's blog announcing the failed deal. "We look forward to seeing how the service evolves in these important areas."

The Committee on Foreign Investment in the United States (CFIUS) is reviewing the TikTok and Oracle proposal, per a tweet from New York Times reporter Alan Rappeport.

Who Will Be Affected By The TikTok Ban?

Despite the ban being so up-in-the-air, TikTok influencers are still concerned about the potential effects the bans could have on their careers. Some have been preparing by sharing their Youtube and Instagram handles so that their followers can keep up with them in other apps. Chelsey White, @chelsweets on TikTok, tells Bustle, "Tiktok has become my largest social platform, so I consider it important to my job as a baking blogger and content creator." Sweet has a food blog where she shows readers how to make simple recipes from scratch. She explains that about 15% of her blog traffic comes from TikTok itself. She's also been able to participate in multiple paid partnerships on TikTok this year. But should the app get banned, White says she would continue to use other platforms like Instagram, Youtube, Pinterest, and Tangi.

"While a TikTok ban would have a negative impact on my business, I’d also be extremely sad on a personal level," she says. "Watching TikTok videos always puts a smile on my face and brightens up my day. That might sound silly, but it provides the comic relief I think we’ve all needed during quarantine. I love sharing funny or cute videos with my friends and sister, and I’d be heartbroken if TikTok was gone."

Jessica Woo, @sulheejessica on TikTok shares similar sentiments. And though she thinks a TikTok ban is unlikely, she's still concerned about the effect it could have on her business. "I’m a makeup artist and I do a lot of bridal makeup," Woo tells Bustle. "I haven’t been able to work as much due to COVID, events are cancelled. TikTok has helped me in such a way that I had other avenues of income. It has allowed me to work from home safely and also be with my family." Without TikTok, Woo says she would utilize Instagram Reels more often instead.