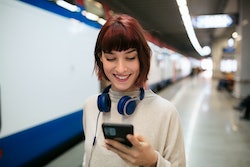 As WhatsApp has become widely used across the world, many users have taken advantage of the app’s encrypted group communication as a way of connecting and coordinating across larger organizations. Perhaps you’ve used WhatsApp to keep in touch with coworkers, your favorite volunteer organization, or your college’s alumni group. Now, with the debut of WhatsApp’s Communities feature, these conversations can be even more streamlined.

Meta announced the new Communities feature on April 14, providing a glance at Communities as part of a larger update to WhatsApp arriving in the near future. “Given lots of feedback we’ve received, we think there’s more we can do to make it easier to help people manage these busy conversations among these kinds of groups,” the company wrote in a blog post.

Communities will fall somewhere between a robust group chat and a company-wide Slack. You can send messages to the group at large, or administrators can create smaller subgroups. For example, the Community for your local volunteer group might have separate subgroups for fundraising, member outreach, or events you’re organizing. Other features will include group calls of up to 32 people, file sharing, and more. Communities haven’t yet rolled out, aside from a test involving a limited group of users, per TechCrunch, but the feature is poised to level-up your group messaging experience.

How Will WhatsApp Communities Work?

According to TechCrunch, users who are hoping to create a WhatsApp community can easily do so by adding members to a Community individually, or by sending an invite link to a preexisting group of people. Each community will have a main announcement group in which only administrators can post, as well as smaller subgroups in which members can converse freely. For example, a community for your apartment building might include a subgroup for rooftop garden maintenance and another for event planning. These subgroups can either be created or approved by admins.

If you’re an administrator of a Community, you can also approve which members are included in a community, as well as any messages that are shared within a community. (This might come in handy, say, for that grouchy neighbor who’s always complaining about the compost pickup.) Across the community, users will also gain new ways of connecting. Some of these new features will include group calls with up to 32 members, emoji reactions, and file-sharing.

Why Don’t I Have Communities On WhatsApp?

If you’re unable to find the feature in your WhatsApp app, then this is likely because the update has not yet arrived on your phone yet — it’s only in test mode with select groups. When the feature is officially launched, after those tests are completed, you can easily check to make sure that your WhatsApp app is up to date by heading to the App Store and clicking “Update” if it’s available. For now, keep your eyes peeled and try your best to keep that chaotic building group chat under control.