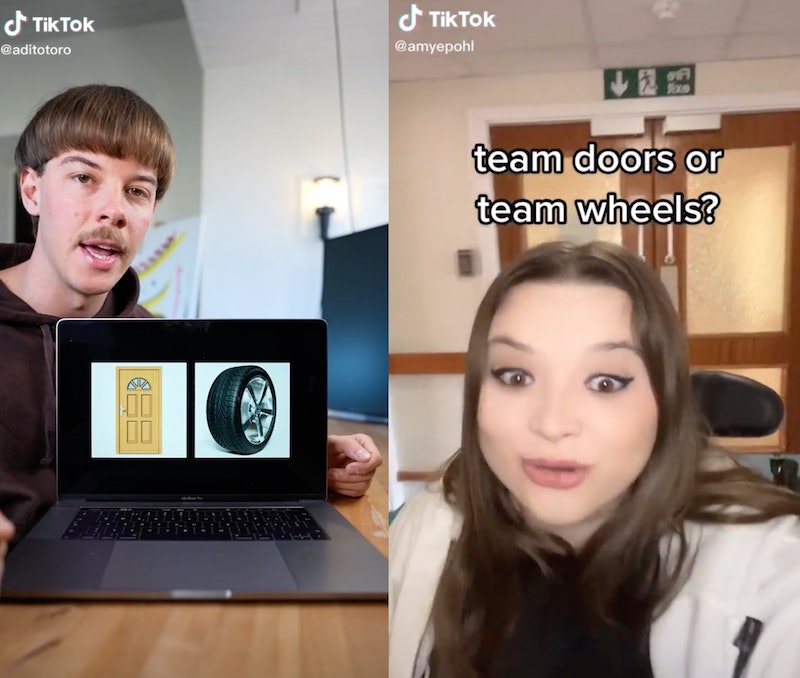 In between recipes for lettuce chips and lamp shopping with Victoria Paris, TikTok’s For You Page has been been spotlighting a heated debate: are there more wheels or doors in the world? Twitter is bursting with theories, and TikTok is making them viral. The seemingly nonsensical debate is so hot, TikTok videos with the hashtag #doorsvswheels have 220 million views. Companies like UPS (team wheels) and celebrities like James Corden (team doors) are weighing in, too. So who’s right, and why should you care?

“Wheels vs. doors” has big 2015 “what color is this dress” energy. Videos that use the hashtag #teamdoors have 46 million views, while #teamwheels videos have 103 million views, but the stats alone aren’t enough to crown an obvious winner. Creators are passionate in their videos, adding their logic via comedic takes and mathematically backed theories. It’s a topic across late night talk shows. Sports teams like the Philadelphia Phillies are divided over it. The wheels vs. doors debate has officially reached meme status.

Why are people even trying to estimate how many doors and wheels there are in the world in the first place? On March 5, Twitter user Ryan Nixon posted a poll, saying, “My mates and I are having the STUPIDEST debate... And I am here for it. Do you think there are more doors or wheels in the world?”

People responding not just by saying one or the other — they’re trying to actually figure it out by calculating how many 18-wheeler trucks there are in the world, or whether a car with four doors and four wheels cancels itself out. Some people are saying gears count as wheels and cabinets count as doors. Others are asking Elon Musk to chime in.

The poll, which garnered over 19,000 likes, yielded a narrow win for wheels, at 53%. But the results were too close to call, according to commenters, and sparked too much debate for people to be satisfied with giving wheels the crown. Over a week later, people continue to argue with the original post on Twitter. One commenter wrote, “Anyone who says wheels isn’t considering the fact that most thing with wheels (vehicles, planes, etc.) has doors on it. Then not to mention all the individual doors inside a building. Prove me wrong.”

Naturally, the debate continues to play out across social media. Part of what makes the discourse so engaging, launching it into the mega viral sphere, is just how committed everyone is to their team. People who are team door are making note of lockers and skyscrapers, while people who are team wheel are pointing to office chairs and strollers. Asking someone if they are team wheel or team door is the new 2022 way of asking someone just how dialed in they are to the internet. Their answer can be the perfect ice breaker to bond or feud over.