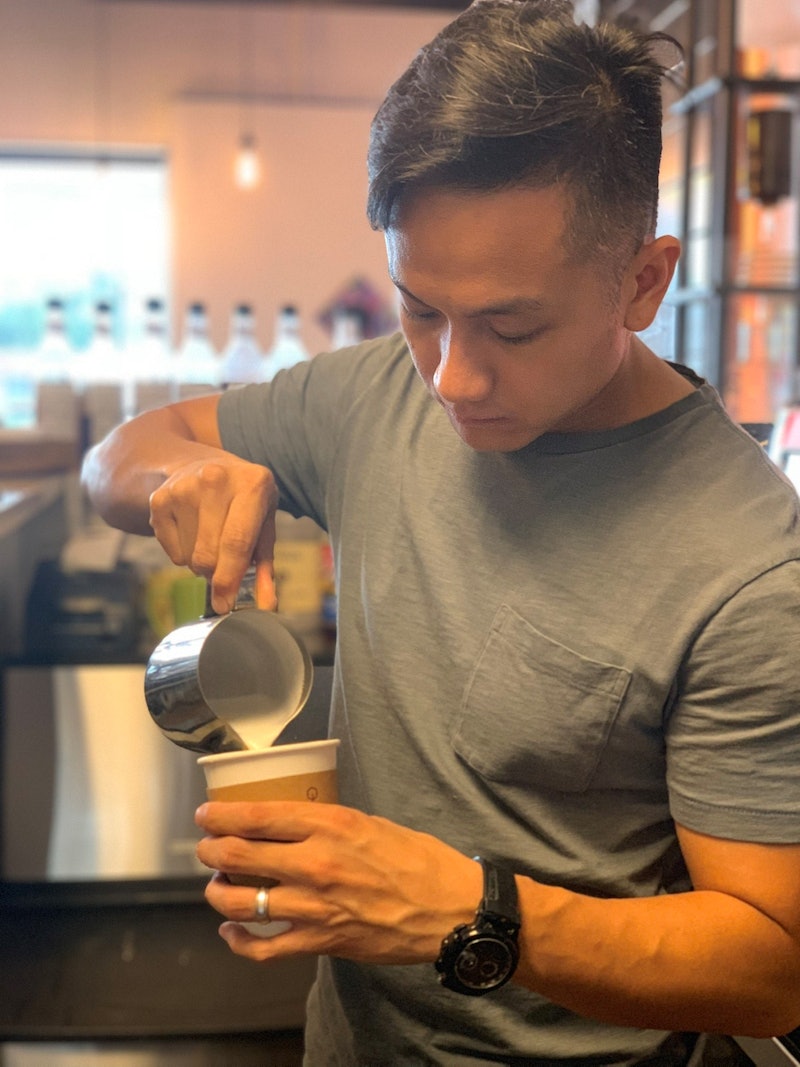 Tree House Craft Coffee & Frozen Yogurt is keeping Houston’s Energy Corridor — home to the country’s top energy companies — caffeinated in style. With Japanese cold brew and ube lattes, options go far beyond the usual corporate coffee menu. Noel Montemayor, the owner of Tree House, opened the shop with his wife in 2015 soon after having their first child and experimenting with other franchise opportunities.

Within a few months, the coffee shop was already receiving high praise from the community. “First and foremost, amazing customer service from the folks that worked here, they made us feel like we were at home,” a customer wrote on Yelp. As a native Houstonite, the community accolades mean a lot to Montemayor. “The community is the reason the business is what it is today,” he says.

After Hurricane Harvey devastated Houston in 2017, Tree House became a hub for first responders and volunteers. Coffee and iced tea were handed out after a generator was brought in, and community members were able to have a place to use restrooms. Even as their own business experienced flooding, Montemayor wanted Tree House to be a place where volunteers could “come and get away from everything.”

Like any small business owner, Montemayor has faced his share of challenges along the way. Tree House was able to quickly transition into online ordering at the onset of the pandemic, though he says inflation has made it difficult to grow. Fortunately for Montemayor, his efforts haven’t gone unnoticed.

​​“It’s an awesome blessing that we never expected,” Montemayor says. “Our equipment is sophisticated and can run into issues — and it's not cheap to fix.”

Business has been picking back up after the completion of a two-year road construction project that made traffic to the store difficult. A good sign: they recently had to buy more tables to accommodate the surge in customers. With multiple flavors of cold brew, teas, and 12 flavors of frozen yogurt, Tree House is the place to cool down from a hot, humid Houston summer.

Montemayor says that the city is his forever home. Born and raised in Houston, he was raised by parents who were both accountants. “They always wanted to be entrepreneurs,” he says. “They helped me out with funding when I was starting out.” He followed in their footsteps, working as an accountant until he opened a frozen yogurt business with a former business partner.

His past experience in corporate America helped him pivot to starting his own business. With over a decade of entrepreneurship under his belt, Montemayor has wisdom to pass along to aspiring business owners. “You have to be motivated and have a go-getter mentality,” he advises.

While having the freedom to create his own schedule allows for more family time, he acknowledges that it’s a 24/7 job. Texts from employees or unexpected issues can come up at any time, but he wouldn’t have it any other way. “It takes time,” he says of growing a business. “Don’t expect customers or revenue to flow in right away.”

Using QuickBooks Online and QuickBooks Payroll has made life easier for Montemayor, particularly since he’s his own accountant. Tree House first opened with two employees, and today, the business has grown to 12 full-time staff members. The coffee shop has become an institution in the community beyond its doors. Tree House is involved in local activities and fundraisers, often donating goods and services.

“Small businesses are the backbones of their communities,” Montemayor says.