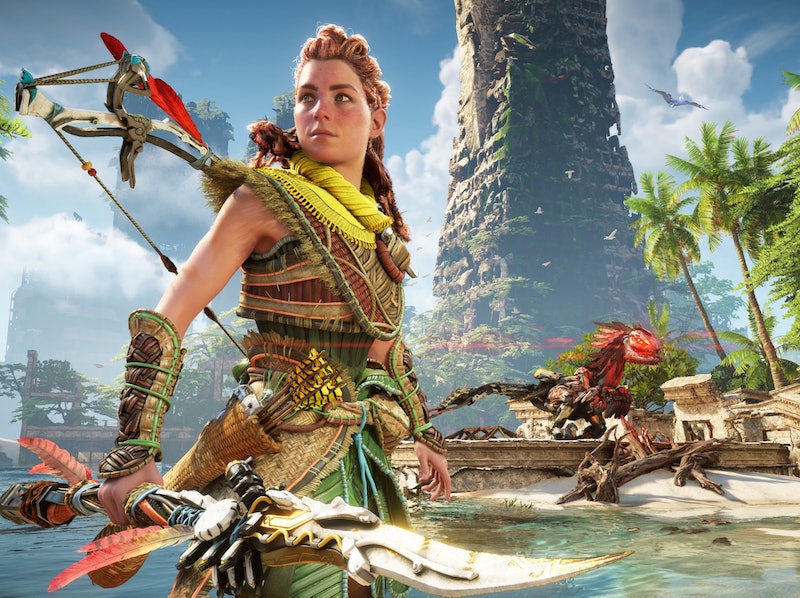 In 2017, the gaming world was introduced to Aloy, a 19-year-old hunter who sets out on an adventure of discovery in Horizon Zero Dawn. Set in the 31st-century, Aloy traverses the land with the help of an augmented reality device, known as a “Focus”, which provides her with special perceptive abilities to hunt and defeat sentient machines that have now taken over the environment. This device also aids her on her journey to discover the world of the “Ancient Ones” – a near-future version of our current civilization lost to some sort of world-ending event involving the machines.

A sequel to Zero Dawn has been in development for quite some time, and now its developer Guerilla Games are releasing its sequel. Titled Forbidden West, the game will see Aloy’s quest continue into a new horizon with even more threats to contend with. But when is Horizon Forbidden West out in the UK, and can you expect from this installment of the Horizon franchise?

When is Horizon Forbidden West out in the UK?

Exclusive to the PlayStation, Horizon Forbidden West comes out on Feb. 18, and is currently available for pre-order. You can buy the PS5 version for £69.99 or the PS4 version for £59.99 from GAME, where you can also buy special and collector’s editions of the title which include extra outfits and weapons in-game as well as other special goodies.

As for the digital version of Forbidden West, the standard edition for PS5 is £69.99 and PS4 is £59.99. You can also purchase a digital deluxe edition for £79.99 which includes both the PS5 and PS4 versions of the game, exclusive in-game items and resources, as well as a digital soundtrack, art book, and comic book.

And if you want to replay Zero Dawn, the complete edition of the game – which includes The Frozen Wilds DLC – is currently on sale for £7.99 on the PS Store until March 3, 2022. Zero Dawn is also available to play with PS Now, PlayStation’s subscription service.

Forbidden West picks up from where Zero Dawn left off, with Aloy now surviving the wilds of the western United States. Exploring the post-apocalyptic states of California, Nevada, and Utah, Aloy is tasked with identifying the source of the “red blight” – a fungus-like disease spreading across the environment and threatening the remnants of humanity.

Aloy enlists the help of new friends and old as she tries to stop the red blight from consuming the Earth, just as the ancient world was overrun by machines prior to the story of Zero Dawn.

What to expect from Horizon Forbidden West

Having played Zero Dawn again and an early copy of Forbidden West back to back courtesy of Sony, the improvements in this entry are immense. The familiarity of gameplay mechanics and aesthetics from Zero Dawn are obviously there, but Guerilla Games have obviously listened to fans and given so much more to play within Forbidden West including new traversal options and tools like a grappling hook and glider.

A new game means new machines, and they are as intimidating as you’d expect in Forbidden West. Despite being absolutely terrified of the velicopator-like Clawstriders and cobra-inspired Slitherfangs, their designs are so awesome and a welcome addition to the franchise.

Among other new features like improved stealth and melee combat, new weapons and outfits as well as more opportunities to customise them, the hardware and power of the PS5 makes Forbidden West one hell of a beautiful game thanks to the 4K and HDR visuals. On top of that, loading times and fast travel are literally instantaneous, and the haptic feedback and adaptive triggers make for an even more immersive experience.

Basically, Forbidden West is everything you would want from a Horizon game – and then some.

More like this
Watch Emma Raducanu’s Incredible Response To Her Early Wimbledon Exit
By El Hunt
A New ITV Doc Follows Dame Kelly Holmes’ Emotional Coming Out Story
By Sam Ramsden
15 Years Of The iPhone, In Pictures
By Emma Carey
How To Protect Your Digital Privacy If You Need An Abortion Post-Roe
By Kaitlyn Wylde
Get The Very Best Of Bustle/UK