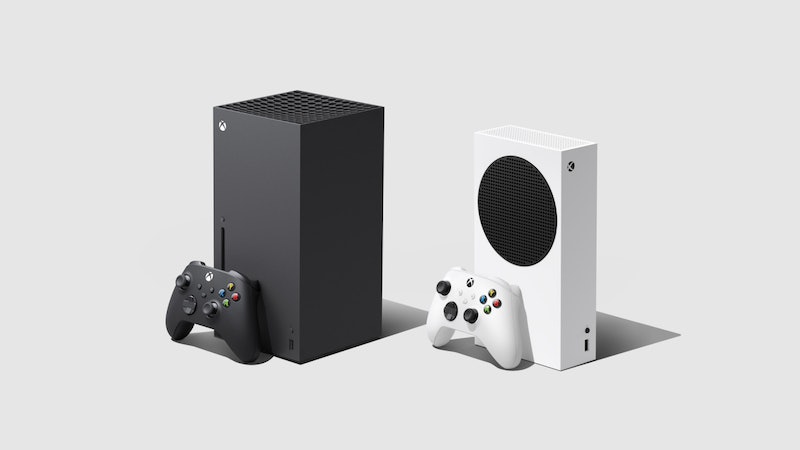 Microsoft, Sony, and Nintendo are the big three when it comes to video game consoles, and every five years or so they push the boundaries of gaming further with new hardware. Thanks to the release of the Switch in 2017, Nintendo has held the top spot for quite some time. But that's all about to change, as Microsoft finally revealed their plans for their ninth-generation console, previously codenamed Project Scarlett. So when will the Xbox Series X be released in the UK, and how does it compare to its competitors?

Moving away from the flat, slim design that has become synonymous with the likes of Xbox and PlayStation, the Xbox Series X looks more like a small tower PC and has the capabilities to match. And on August 12, Microsoft announced a global release date of Nov. 12 as opposed to Sony’s staggered launch for the PS5.

How Much Will The X Box Series X Cost?

The Series X model will retail at £449, the same as the PS5, while the smaller Series S console will cost £249. Unlike the PS5’s Digital Edition that’s only missing a disc drive, the Series S is a smaller version of the main console, runs at 1440p instead of 4K, and lacks the raw processing power. This is why the cost jump is substantially bigger compared to the PS5 consoles.

The X Series X is equipped with "a custom-designed AMD processor, high bandwidth GDDR6 memory and a next-generation solid-state drive (SSD)". This will "give developers the power they need to bring their creative visions to life," enhancing the players experience in the process. In a recent interview with Gamespot, head of the Xbox brand Phil Spencer explained how the team wanted to have a "dramatic upgrade from the Xbox One base console," which meant boosting the power of the console's GPU (graphics processing unit) eight-fold. Basically, it’s one beasty piece of hardware.

There's also the matter of load times, which is seemingly becoming more obsolete as Sony demonstrated at gamescom in August. Sony will undoubtedly have competition with Microsoft on this front, as Spencer revealed in a post published by Microsoft’s news site Xbox Wire that they'd invested in "NVMe solid-state drives" and have given "developers a lot of new capabilities" which has helped them "try to virtually eliminate load times".

Microsoft has also developed the “Smart Delivery Initiative,” which will provide players with the opportunity to buy a game once and not have to pay for upgrades for different generations of the console. “This technology empowers you to buy a game once and know that — whether you’re playing it on Xbox One or Xbox Series X — you are getting the right version of the game on whatever Xbox you’re playing on,” Spencer explains. “This technology is available for all developers and publishers, and they can choose to use it for titles that will be released on Xbox One and come to the Xbox Series X later.”

Is It Available For Pre-Order?

Pre-orders will soon be available at UK retailers at 8 a.m. on Sep. 22, per Eurogamer. These include the likes of GAME, Argos, PC World, Smyths Toys, and John Lewis & Partners alongside online retailers such as Amazon, AO.com, Very.co.uk, and the Microsoft Store.

What Games Are Coming Out With The Console?

Games releasing exclusively to Series X (and PC) include Halo Infinite, As Dusk Falls, Avowed, and Fable. Players will be able to experience dozens of games at launch, like Yakuza: Like A Dragon, Assasin’s Creed Valhalla, Watch Dogs: Legion, and Gears Tactics.

Editor’s Note: This article was updated to include new information about the Xbox Series X

This article was originally published on Dec. 16, 2019