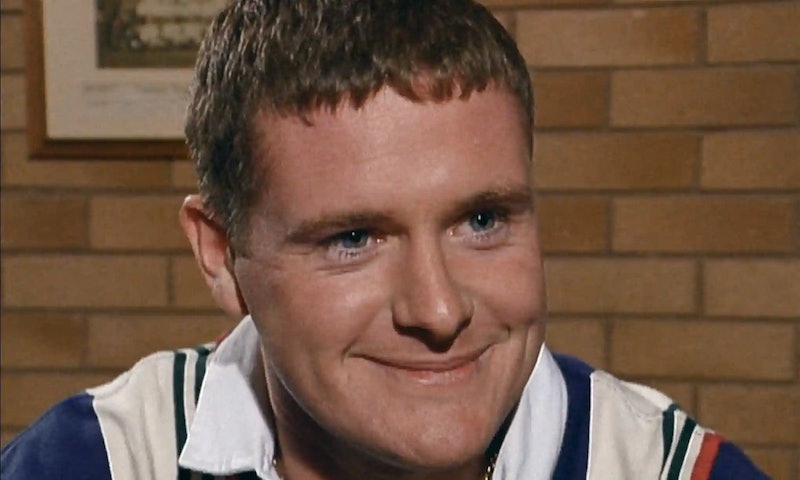 A peroxide blonde legend on the pitch, Paul ‘Gazza’ Gascoigne’s glory days spanned the eighties and nineties. From that now-legendary volley against Scotland at Euros ‘96 (followed by his infamous “dentist’s chair” goal celebration) to a swooping semi-final free kick against Arsenal at the ’91 FA Cup, the attacking midfielder’s achievements are embroidered into footballing lore. And his love of taking the mick made him just as compelling; whilst playing for Rangers, he once booked the referee. Incredible footballing prowess aside, Gascoigne’s struggles with addiction and mental health became tabloid fodder, and his career fell apart in front of the world.

He’s also had numerous legal issues. He received a suspended prison sentence over drink-driving, plead guilty to racially-aggravated abuse, and has admitted to harassing his ex-girlfriend.

A two-part documentary belonging to BBC Two, Gazza explores Paul Gascoigne’s meteoric rise to fame, and how it all fell away. Viewers gain insight into Gascoigne’s early childhood trauma and his history of mental illness. His former Tottenham Hotspur teammate Paul Stewart is among the interviewees featured in the series. He describes seeing Gazza’s struggles play out in the dressing room, adding that the troubled athlete remains “the best player in the world" in his eyes.

Gascoigne’s cult fandom went into overdrive at the 1990 world cup, with his following dubbed “Gazza-mania.” As the young footballer’s star rose, his alcohol-fuelled partying made front-page news. In 1996, Gazza married his ex-wife Sheryl, and they had a son together. They divorced two years later, in 1998. Sheryl made serious allegations of domestic abuse against the footballer. Gazza admitted he had abused his spouse, issued a public apology, and later checked into a rehab.

As Gazza moved from club to club, at home and overseas, he continued to struggle with addiction and health issues. He has been sectioned a number of times under the Mental Health Act since retiring from football in 2004.

In 2015, Gascoigne testified in court, commenting on the toll that the media intrusion had taken on his mental health. Speaking about having his phone hacked by journalists from the Mirror, he said it was: “Just horrendous. And people can't understand why I became an alcoholic?”

On reliving his past through Gazza, the footballer told BBC Sport, “It was really emotional… Some things are very hard to watch."

Now 54, Gascoigne lives a quiet life in Dorset, with a flat full of nostalgic football memorabilia. In 2020, he told the Mirror he’d blown his substantial fortune.

He said: “I’ve probably got through about £20million when you take into account royalty payments, wages, and sponsorship deals. I’ve bought some lovely clothes, jewellery, and had some great holidays, I’ve really enjoyed it.”

He concluded: “I gave a lot of money away to family. I’m not materialistic. If I was to wind my life back, I’d do it all again. I am happy.”

With contributions from Rachel Mantock and El Hunt

More like this
Graham Norton’s 10 Best Eurovision Zingers Will Leave You Howling
By El Hunt
We've Got A Text! Our First Look At 'Love Island' 2022 Has Arrived
By Sam Ramsden
Jake Daniels Just Became The UK’s First Active Football Player To Come Out As Gay Since 1990
By Sam Ramsden
UK Viewers Can Watch 'The Staircase' Documentary Now
By Sam Ramsden
Get The Very Best Of Bustle/UK