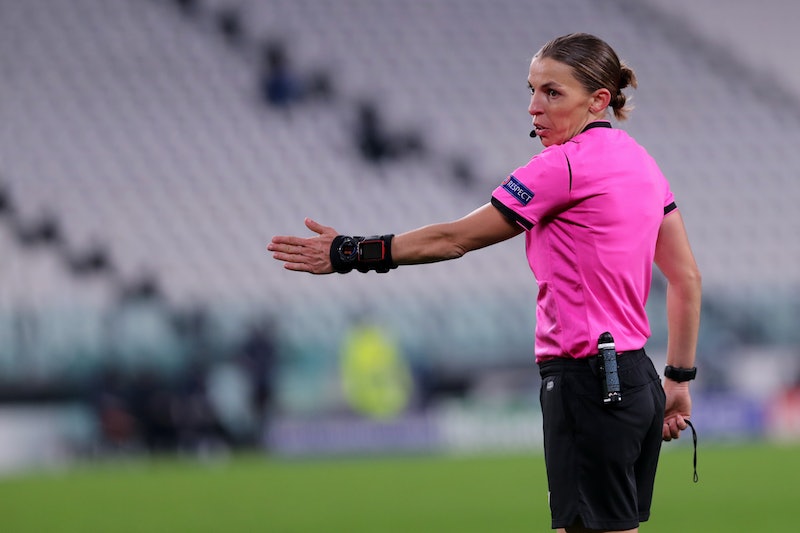 Football history was made on December 2 when, for the first time ever, a female referee was put in charge of a men's UEFA Champions League match. Stéphanie Frappart oversaw the Juventus-Dynamo Kiev game in Turin, where the home team came out tops with a 3-0 victory. But what else is there to know about Frappart, and how did she come to make this trailblazing move?

The 36-year-old referee is no stranger to making history in the sport — she's literally a game-changer. In 2019, Frappart was also the first woman to officiate the men's UEFA Super Cup final between Liverpool and Chelsea. In the same year, she also refereed the Women's World Cup final between the U.S. and the Netherlands in France and became the first female referee to take charge of a French Ligue 1 match.

French-born Frappart began her football career as a player during her teenage years. Per Talk Sport, she stopped playing football around the age of 18 in order to pursue her dream of becoming a referee. Frappart has been refereeing since 2009, and in 2011, she began refereeing men's football in the French third division.

Speaking to CNN, Frappart revealed that when she started her training to become a referee she was the only female on her course.

Frappart's career milestones are a welcome step in a sport that has typically prioritised its male players and their games. However, Frappart doesn't necessarily see herself as a "trailblazer."

"I didn't think about breaking barriers or making history," she explained to CNN, "just doing my job. Only that."