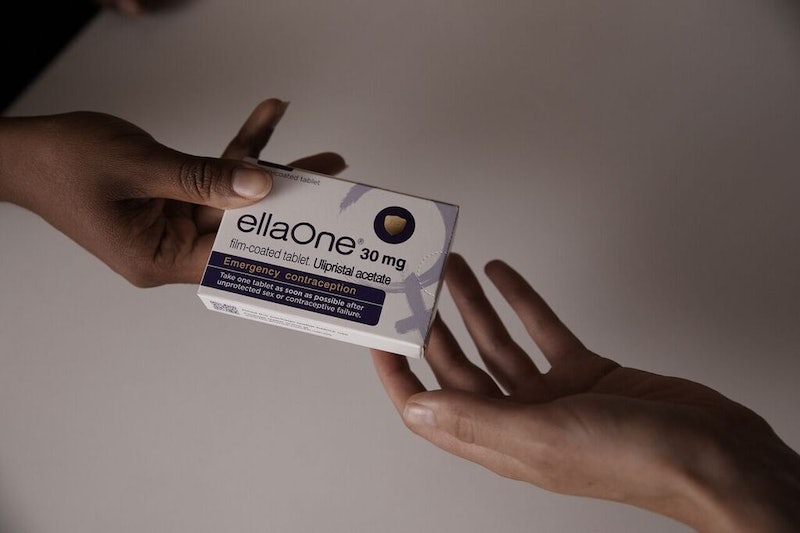 ellaOne, one of two morning-after pill brands available in the UK (the other is Levonelle), surveyed almost 900 people across three music festivals in August 2018 as part of their #MyMorningAfter campaign. They found that 57.51 per cent of respondents felt embarrassed or ashamed about buying the pill, and only 11.34 per cent felt confident buying it. Other findings? 71.73 per cent said they'd "rather fill out a short questionnaire at the pharmacist than have a consultation," suggesting that many find speaking to a pharmacist intimidating or unpleasant.

In June 2018, ellaOne and Censuswide surveyed over 2,000 people between 17 and 35 on their attitudes towards the morning-after pill, and found that 28 per cent of respondents wouldn't tell anyone they were taking it. 26 per cent said they'd wait until all other customers left the pharmacy for asking for the pill, and 12 per cent said they'd even go to another town to make sure they didn't see anyone they knew while obtaining it. The depressing takeaway from these statistics? People with uteruses are still burdened with undue shame about taking the morning-after pill.

The findings of the ellaOne surveys support earlier statistics released by sexual health charity FPA (formerly known as the Family Planning Association), which focused on people between the ages of 16 and 24. 52 per cent of respondents to an FPA survey said that there was still stigma attached to the morning-after pill, while 46 per cent said they wouldn't know where to get it if they needed it.

Both the ellaOne and FPA surveys also revealed the prevalence of a major morning-after pill myth: that taking it induces, or is akin to, an abortion. 35 per cent of respondents to ellaOne's survey thought the pill "causes a mini abortion", while 47 per cent of those surveyed by FPA "thought using emergency contraception was like an abortion, or weren’t sure." As Tracey Forsyth, lead contraceptive nurse at the British Pregnancy Advisory Service (BPAS), told Bustle, that's just not true: the morning-after pill works by preventing or delaying ovulation, not by terminating a pregnancy. Plus, as I've stressed before, neither abortion nor the morning-after pill is worthy of stigma or shame.

The #MyMorningAfter campaign, according to ellaOne, aims to dissolve that stigma and challenge misinformation. The campaign will share "real-life stories, original and honest interviews, and educational content" on their website, while they also intend to launch a podcast. "Taking emergency contraception is regarded as a mark of irresponsible behaviour," ellaOne says in a press release. "In reality: seeking emergency contraception is the opposite. It is a responsible choice, not a confession of guilt." Let's hope the message catches on.