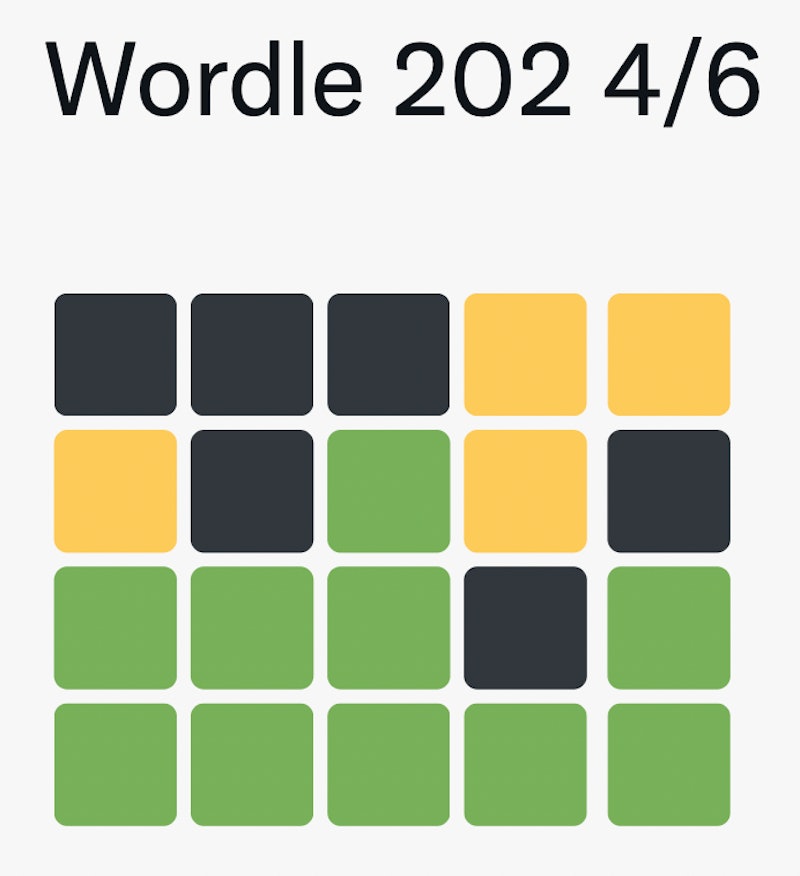 Your Twitter feed is littered with green and gray squares and cryptic conversations about mystery words. The answer is six letters long: Wordle. The internet is crushing hard on the online word game that won’t suck your time and battery, nor melt your brain like the Sunday crossword puzzle. Instead, Wordle takes just a few minutes of your time every day. Played the Wordle for the day already? You’ll have to wait until midnight for the next one.

The no-frills brain teaser was created by Brooklyn, New York-based software engineer Josh Wardle in 2021 as a guessing game for his partner. In October 2021, after lots of encouragement from the inside circle of OG players, Wardle released the basic web browser game to the public. Then, on Jan. 3, The New York Times published a feature on Wordle, and per Google Trends, searches for the game went from zero to 100. By the first week of January, over 100,000 people were tweeting about the game. And even after The New York Times bought Wordle for a price “in the low seven figures” at the end of January, the game is still perennially trending on Twitter.

How Do You Play Wordle?

Wordle is very easy to play (though winning is another story). To get started, dust the cobwebs off the corners of your mind, channel your SAT word bank, and head to the not-so-glam Wordle site to be presented with your daily puzzle. You have six chances to guess the five-letter word-of-the-day.

Type in your first guess manually with the keyboard. If you get a letter right, it will turn green. If you get a letter right, but it’s in wrong place, it will appear yellow. If the letter doesn’t appear in the word at all, it will appear gray. If you guess the right word on the first shot, you’ll get a notification that you’re a genius. There are no clues or hints beyond the color responses, so you don’t have to be good at crossword puzzles or solving riddles or brain busters. Everyone has the same advantage (or disadvantage) here.

Unless of course you freeze up when put on the spot and can’t think of any five-letter-words. Which, according to Twitter, is a pretty common phenomenon.

Everyone has their own Wordle strategy at this point, and one popular Wordle hack includes playing random five-letter words in order to get more clues about the final answer — even if they don’t include letters that you’ve already revealed to be part of the solution. (For example, playing WEANS, then GROUT.) Sure, you “waste” a guess, but if you can’t think of another word with a green N and a yellow S, it’ll help you move ahead.

Well, turns out that hack only works in Wordle’s Easy Mode. Wordle has a Hard Mode that only lets you guess words that include previously revealed letters, Mashable reported. So, using the example above, you would have to guess a word like STINK and make use of your clues. (And boy, did that take some time to come up with.)

To turn on Wordle’s hard mode, tap the gear wheel in the top right corner, then toggle on hard mode (the top option). When you play in hard mode, you’ll get a pop-up that prevents you from playing a word if it doesn’t make use of your previously revealed clues. In hard mode, you can still play words that use letters that you already know aren’t in the solution, or play yellow letters in the same spot as a previous guess. (For example, playing WEANS, then STINK, then SCANT.)

How To Get Better At Wordle

You know those days where you get the Worlde on the sixth try, and it’s something you should have gotten sooner, like SHEET? (Those dang double vowels!) A new tool from The New York Times will help you get better at Wordle by analyzing your guesses and suggesting stronger words to use for future. Called Wordle Bot, the webpage will give you a grade for how well you did on that day’s Wordle (!), how lucky your guesses were, and then analyze your word choices, guess by guess. If you love crunching numbers, you’ll be thrilled by the bot’s analysis, but if not, you’ll get lots of ideas for new words to play to up your Wordle game.

Arguably the best part of Wordle is not the experience of playing the game, but participating in the communal Wordle bonding on social media. To add your green or gray squares to your Twitter feed, just tap the Share button after you get your results. This will copy an emoji-laden, spoiler-free link to your clipboard. Hit “Paste” on a Twitter draft to see your Wordle success spelled out in emojis.

To avoid ruining the fun for others, don’t screenshot the actual game until the next day. If you share with the official clipboard link, your Wordle score will show up with the game number, followed by how quickly you guessed it out of six tries. Because if you don’t share your Wordle score on Twitter, did you even 2022?

More like this
Ashamed Of Your Screen Time Stats? Here's How To Change That
By Alexis Morillo
11 Super Bowl Instagram Captions To Use On Game Day — Even If You Don’t Like Sports
By Alexis Morillo
Everything You Need To Know About The Samsung Galaxy S23 Ultra’s New Camera
By Alexis Morillo
Samsung's New Phones Have Amazing Cameras & Come In 8 New Colors
By Alexis Morillo
Get Even More From Bustle — Sign Up For The Newsletter
From hair trends to relationship advice, our daily newsletter has everything you need to sound like a person who’s on TikTok, even if you aren’t.

This article was originally published on Jan. 7, 2022