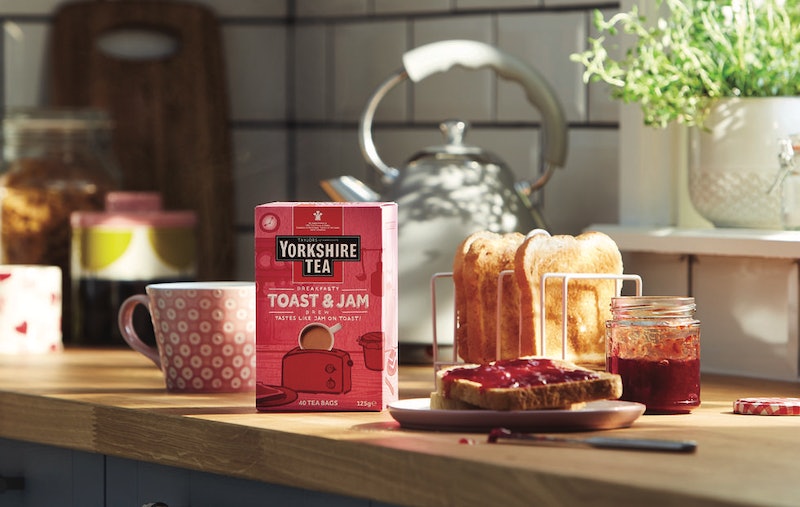 Some things are made for each other, like freshly toasted bread covered in jam alongside a builder's brew. So what if you could streamline that process and have it all in one? This might sound out there but Yorkshire Tea is launching a toast and jam flavour tea.

Wow, 2020 just got even weirder, am I right? The new product will cost £2.29, from one of the UK's most beloved brands, and is due to hit Asda supermarkets from Thursday Sept 24. It will also be rolled out across the nation later in the year.

A photo of the new product was shared via the Yorkshire Tea Instagram, captioned it's, "real tea that tastes like real tea, but also toast and also jam."

Tea innovation manager at Yorkshire Tea Kate Halloran, who invented the product, told Good Housekeeping "Toast & Jam is a lip-smacking smattering of toasty, jammy loveliness. Perfect for mornings, it is a strong breakfast blend with all of the loveliness of jam on toast without the crumbs!" She went on to explain, "we wanted to create a tea that will send people into their day with a spring in their step and a smile in their soul."

Although it's not been confirmed what flavour jam it's meant to taste like, we do know that it's 100% Rainforest Alliance certified and is gluten-free unlike your standard slice of toast.

The UK are definitely a nation of tea lovers. According to a YouGov survey from Aug 2020, 44% of Brits drink several cups a day. So as you might expect, the country's tea connoisseurs have a lot to say on the matter. After one Twitter user suggested it's not that difficult to just make toast and jam alongside your cuppa, Yorkshire Tea shut them down by responding, "Speak for yourself! Last time we tried we stabbed the cat."

Those wishing to try the tea can get it in Asda stores from 8 p. m. on Thursday, September 24.

More like this
Ben & Jerry’s New Sundae Flavours Are A Chocoholic’s Dream
By Sophie McEvoy
Pret & Costa’s Coffee Is The Strongest On The High Street, According To Which?
By Sam Ramsden
16 Valentine’s Day Quotes About Chocolate That Will Make You Hungry
By Emma Cueto
Dunkin’s Valentine’s Day Lineup Includes A Drink That Tastes Like Dessert
By Alexis Morillo
Get The Very Best Of Bustle/UK
Sign up for Bustle UK's twice-weekly newsletter, featuring the latest must-watch TV, moving personal stories, and expert advice on the hottest viral buys.