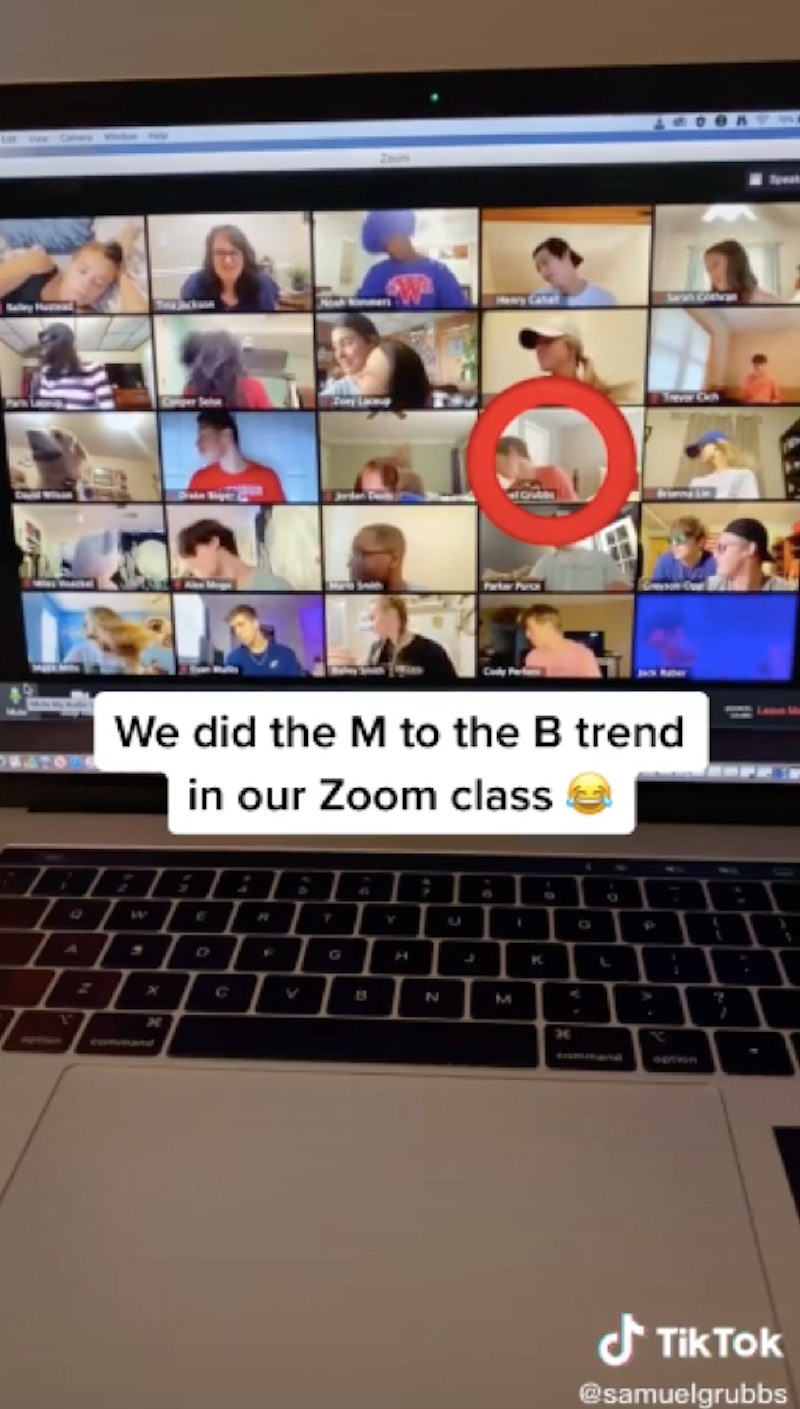 The music starts playing, and an entire class breaks out in unison to a choreographed dance. In the middle of a meeting, an un-muted mic reveals a cartoonish sound of flatulence. A pencil is passed across a checkerboard of video screens — the host is confused, but smiling.

While there's nothing funny about the pandemic's effect on education and the workforce, Gen Zers have found a way to amuse themselves by pranking their classes on Zoom, and the results are one of the circumstance’s only redeeming qualities. You'll want to brush up on the best Zoom pranks if you have a particularly patient, teacher, or boss — who also happens to have a great sense of humor. TikTok's most successful Zoom pranks feature teachers laughing along with their class or a boss who is at least politely amused. Yet to surface are the Zoom prank fails — though they're likely aplenty.

Carl Dawson, 19, has had multiple Zoom prank videos go viral on TikTok, thanks to his forgiving college English professor. Dawson says the key to a great prank is "about making everyone feel a part of it, as if they did something together — and it has to be a funny idea."

If you've weighed the variables and decided that it's not safe to play a virtual prank at work, you can live through the experience vicariously. Videos with the #zoomprank have 55 million views on TikTok, many of which have millions of likes each. Here are some hilarious but inoffensive Zoom pranks to try or check out. Just don't forget to thank your teachers for their endless patience after.

TikTok dances are the best inspiration for this prank, as any trending dance is going to have countless references that will be easy for your classmates or coworkers to look up. The "M to the B" dance is likely the most straightforward dance, as it's just a combination of head turns and bobs and looks particularly comical in gallery view.

This prank doesn't require much footwork but involves everyone in the session getting on board. Offline, pick an item that you plan to "pass" from one side of the video grid to the other. This should be an object that everyone has, like a pencil, or a piece of paper, or a tissue. Decide who is going to start the chain by asking to borrow the item, and who is going to be the first to pass it. Then just have everyone else in the class be ready to "pass" the object across the screen. Since Zoom always puts your video in the top left corner of the screen, you may want to designate a person to coordinate the handoffs by making a list of how the Zoom appears to them.

This prank is so good, the host of the session will have no idea they are being pranked. Arrange to have everyone change their names to "reconnecting..." and cut the camera feed. It will appear as if the entire class has gone offline, but you'll still be able to hear the teacher's reaction and watch them try to figure out what went wrong, which is potentially the funniest part.

Get everyone on the same page about pretending at a certain point in the session, that the host's sound has gone out. Have multiple people say you can't hear them, send messages in the chat saying the mic is on mute. Watch your teacher or boss become very frustrated with technology and then relieve them from the humiliation by letting them know it was a prank.

This prank doesn't involve everyone to plan together; it just takes the courage of one prankster to say something embarrassing, or play a sound bite, and pretend that they didn't know their mic was on. Bathroom humor thrives in this format. Staged conversations with parents or roommates and playing funny songs in the background will also do the trick.

This prank can be as harmless or bold as you want. Pick a theme with your classmates or co-workers and plan to sign online with the backdrops on the same day. These images can be as absurd or charming as you desire — The Queen, baby animals, outer space, a picture of your teacher, or even a photo of your coworker’s office background so they get confused on where you actually are.

Some Gen Z-ers are flexing their acting skills by playing out faux scenarios on camera, like being dragged off screen, or falling asleep, or sitting on the toilet. These bizarre, subtle pranks can be very funny when they are done seriously. But the key is calling cut before it goes on too long and concerns your host or makes anyone feel too uncomfortable.

If you and your classmates can carry a tune, take over your class with a multimedia production of your favorite musical number. Who could be mad about something so entertaining? Add graphics from the musical to your profile pictures for the full effect. Get together and plan out the production ahead of time. The more impressive the performance, the less likely you will be to get in trouble.

Zoom On The Go

Out of sick days? Take your seat in class while on the go to get that attendance check, and also give everyone else in the class something to laugh about. The more irreverent the chore the better. Get your groceries and take a meeting at the same time. Join a lecture while you take your dog to the vet. Give your class the behind the scenes footage they didn’t know they needed.

One creative way to make the most of the custom backdrop feature is to use a video of yourself. The best thing about this subtle prank is that it will likely take your teacher a while to even figure out what's going on. The more you interact with the video, the better it will look. So film yourself walking up to the desk and putting down a cup of coffee, that the live version of yourself can drink, or stand in the background for a while for a less subtle approach.

The Call Came From Inside The House

Leave this prank to the classmate or coworker who has the best editing skills. Stealing your professor or host’s backdrop and using it as your own is low-key terrifying, but so clever you’ll probably get props for it.

Take a break from being on camera and treat your Zoom-mates to some adorable slobber-free puppy time. This prank is pretty harmless, and TBH will most likely delight anyone you share a screen with.

More like this
Here’s How To Get Verified On TikTok
By Emma Carey
7 Birthday Instagram Story Ideas Your Friends Will Love
By Emma Carey
What Does POV Mean On TikTok? The Popular Acronym, Explained
By Emma Carey
RushTok 2022 Is Here & TikTok Is Just As Obsessed As Last Year
By Sarah Ellis
Get Even More From Bustle — Sign Up For The Newsletter

This article was originally published on Sep. 17, 2020