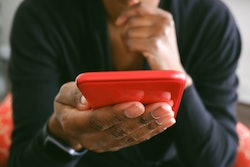 Going to vote without your phone is as unthinkable as, well, going anywhere else without your phone in hand. How will anyone know that you did your civic duty if you don’t tell them? Will you get in trouble for snapping a selfie with your ballot? What if you forget which candidate you want to vote for and need to do a quick Google? But wait — is bringing your phone with you to vote legal?

It totally depends on what state you’re voting in. In some states, like Alabama and Arizona, you can’t take any photos in a polling place, period. But in Alaska, you can take photos in your polling place as long as you don’t take photos of your ballot. In some other states, like Arkansas, it just isn’t clear what is and isn't allowed. It also depends on what you’re using your phone to do.

Can I text someone while I’m voting?

There are a few states where you can’t use a phone in your polling place at all. Here’s a quick list:

If you don’t live and vote in one of these states, there's technically nothing barring you from using your phone by the voting booth. But if a poll worker asks you to put your phone away, you should listen to them.

What about Googling a candidate because I forgot their name?

Who hasn’t been there? As long as you aren’t in one of the states listed above, you’re probably good. But, as always, pay attention to what poll workers say. If there are signs posted at your polling place explicitly banning cell phones, get your Google on before you head into the voting booth.

Then can I bring notes in?

When in doubt, settle for the analog alternative and bring some notes about the candidates you’ll see. Voting isn’t a test — you can definitely bring in notes, campaign materials, or a sample ballot. Just make sure you take them with you when you leave.

I’m excited about voting. What if I want to take a selfie with my ballot?

We get it — voting is exciting, and you want to share that feeling! But if you’re in the wrong state, you can get in serious trouble for taking a photo of your ballot, or any photos in your polling place. According to the Huffington Post, if you live in one of these states, do not try to snap a pic with your ballot:

What if you just want to take a selfie of, well, yourself? These are the states where you can take photos in the voting booth if you want, just as long as you keep your ballot out of it:

And here are the states where you’re totally clear to take a selfie with your ballot, according to CNN:

Go forth and ‘gram! Just remember: These rules are general. Your polling place might have different rules if it’s on private property. Make sure you’re being respectful of other voters and their ballots. If all else fails, you can always take a photo afterward.