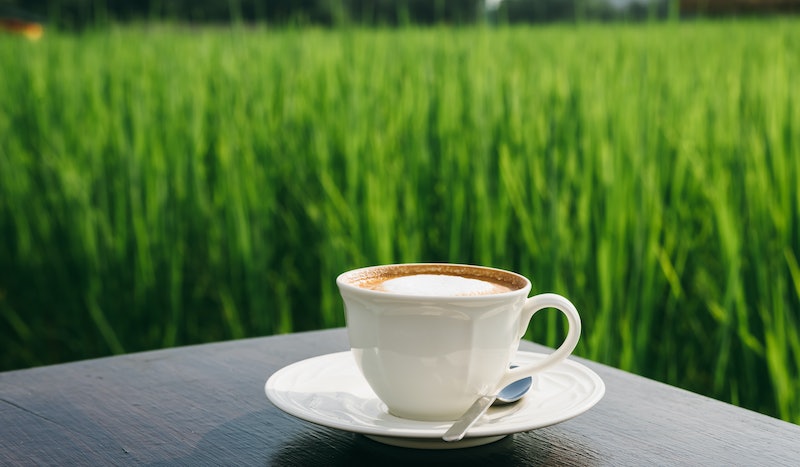 If you live in a state where CBD is popular, you’ve probably walked by dozens of cafés with little hemp leaves drawn on chalkboard signs. Entrepreneurs across the United States have long been offering CBD candies, lotions, and oils in the states where cannabis is completely legal, but since the passage of the farm bill that legalized hemp across the country, it seems like we’re really seeing the popularity of the compound explode. Now you can find CBD-infused coffee and cocktails, and even fancy CBD cuisine, in many cities.

CBD, which is short for cannabidiol, is a cannabis compound that has relaxing and sedative effects. It is derived from hemp, which contains less than 0.3% THC (the cannabis compound with psychoactive effects), so CBD doesn’t get you high. It’s so hip right now that in a National Restaurant Association survey, 77% of respondents said cannabis or CBD-infused drinks are set to become the top 2019 trend.

“I think there are a lot of reasons why a café might want to sell CBD products,” Tim Calkins, clinical professor of marketing at Northwestern University, tells Bustle. “Partly, it’s a revenue opportunity, but more than that, it’s a branding opportunity. … If you’re selling CBD products, that suggests that you’re open-minded, you’re forward-looking, you are welcoming to all sorts of people.”

CBD cafés are trendy right now, but much like the rest of the cannabis industry, that space seems to be dominated by white, mostly male entrepreneurs. As state lawmakers weigh whether to legalize cannabis in its entirety, women business owners and entrepreneurs of color are still vying for opportunities to break into what promises to be a lucrative field.

Though many cultures have had a history of infusing cannabis into their food and drinks, the isolation and use of CBD is a relatively new phenomenon. It was about 10 years ago that the use of CBD in epilepsy treatments sparked a renewed interest in the compound, says Ethan Russo, director of research and development at the International Cannabis and Cannabinoids Institute, a research hub dedicated to the “advancement of cannabis and cannabinoid treatments.”

While it’s difficult to pinpoint the exact moment CBD-infused food and drinks were first commercially offered in the United States, Russo estimates that cafés and restaurants in the United States began offering CBD during the last five years. States where cannabis is legal for recreational use, such as Washington and Oregon, were some of the first to experiment with it.

For instance, Trichome, a Seattle-based company that sells CBD-infused consumables and “legalization lifestyle” merchandise, began offering cannabis coffee, which provided a high, during special Friday events in 2014, when cannabis was fully legal in the state.

“We were known for our cannabis coffee already,” Lonnie Wells, Trichome’s creative consultant, tells Bustle. But then the rules on cannabis-infused edibles in Washington state got a little stricter, so, Wells says, “we decided to show people what the CBD coffee was about.”

Now, curious consumers come to Trichome looking for CBD as a tool for anxiety relief and overall self-care, according to Wells.

In nearby Portland, Oregon, is Grön Cafe, which describes itself as America’s first licensed CBD café and tasting room. Founder Christine Smith, who also owns a CBD confections company called Grön, says she decided to open her café in 2018 to educate novice CBD consumers who are unsure of what products are best for them in a more relaxed environment.

“It’s providing something that’s not intimidating, not threatening, but it’s super suitable,” Smith tells Bustle. “The beautiful thing about chocolate or food is that it’s something everybody’s used to.”

Smith says many consumers are looking to incorporate CBD into their everyday routines, and tasting CBD beverages at a respected establishment is a convenient entry into the movement. “CBD cafés are popping up primarily because folks are looking at easy opportunities to incorporate CBD into their daily lives and frankly consumers are actively looking for it,” she says. “People are curious, and they are interested in exploring and learning more.”

But when it comes to a less-informed CBD consumer base, up-and-coming chains — even those outside of states where recreational cannabis is legal — are beginning to corner a portion of that market, creating and selling CBD-infused products, too.

Gregory’s Coffee, which has locations in New Jersey, New York, and Washington D.C., offers a CBD oil latte, though it recently suspended serving it in New York City. In a February interview with Forbes, founder and CEO Gregory Zamfotis explained his reason for offering the CBD coffee: “It’s oil extracted from a hemp leaf,” he said, adding that it recently became legal under the farm bill signed by President Donald Trump. “It gives you the benefit of cannabis without the negative side effects.”

Market analysts even predict that Starbucks could be the first big chain to roll out CBD coffee, considering how much the CBD industry is growing. CEO Kevin Johnson says it’s not part of his plan right now, though.

I said, "This makes sense." Everyone should have access to this, because it changed my life.

The trend goes beyond just coffee and sweet treats. Chefs are also making elaborate recipes that infuse CBD into meals. Andrea Drummer, a chef and co-owner of a California medicinal marijuana dispensary focused on food, developed a CBD menu for the James Hotel in New York in 2018. It included spicy meatballs, a pear vinaigrette salad, tater tots with chipotle ketchup and sriracha mayo, and an ice cream sundae, each containing 10 milligrams or more of CBD.

Drummer didn’t start her career in cannabis. But after back pain led her to try cannabis as an alternative to opioids, she began learning how to infuse her culinary creations with CBD in 2012. Once she understood how the body digests the compounds, she decided to pursue a career in cannabis cuisine to provide broader access to it.

The trendiness of CBD in drinks and food aside, many states and cities are still grappling with whether it’s legal and safe to add the compound into consumables. Cannabis — which is a term that encompasses both hemp and marijuana — remains federally illegal, though 10 states and Washington D.C. have fully legalized cannabis. But industrial hemp, which most CBD comes from, is legal.

In 2018, Trump signed into law a farm bill that federally legalized hemp. How it should be regulated, though, falls under the Food & Drug Administration (FDA), which still hasn’t worked out recreational CBD consumption. With the passage of the farm bill, the FDA is now working to create regulations for CBD products, the agency announced earlier this month.

Drummer’s menu at the James Hotel was discontinued because the New York City Department of Health started cracking down on the use of CBD in restaurants and cafés in February, out of concern for consumer safety, noting that it’s not regulated for food use or approved as a dietary supplement. The city plans to begin issuing infractions and fining eateries that still offer CBD consumables in October 2019.

But that could all change again if the FDA determines through its public hearings and interagency working group that CBD is safe as a food and beverage additive.

The People Left Out

As CBD entrepreneurs navigate these fluid state and federal regulations, others are being denied the opportunity to enter the industry at all. The government’s criminalization of cannabis, and even the CBD industry’s saving grace, the farm bill, have pushed potential entrepreneurs from the communities most impacted by the war on drugs out of the cannabis space.

The farm bill carved out an exception when it comes to who can work with CBD: People who have a felony drug conviction on their record are banned from working in the hemp industry for 10 years. This has a significant impact on people of color, who have long been disproportionately targeted for small cannabis violations. According to the ACLU, black people are nearly four times more likely to be arrested for cannabis possession than white people, nationally. In some areas, the numbers are even worse: In New York City, black people were eight times more likely than white people to be arrested on low-level cannabis charges, and Hispanic people were five times more likely to be arrested for such violations.

This imbalance extends beyond the criminal justice system. In the business world, access to information on how to enter the CBD industry remains scarce for women and people of color. These underrepresented groups navigate the space mostly on their own, crafting their own CBD and cannabis recipes without guidance from government agencies or industry peers.

Drummer tells Bustle that at first, not only was she “completely green” to cannabis and CBD, but as a woman of color, she also found that many chefs were secretive about their knowledge of cooking with cannabis. She learned to dissect different flavor profiles and figure out the wellness benefits on her own.

To open up the CBD sector to diverse entrepreneurs, Shanita Penny, president of the Minority Cannabis Business Association, says existing companies and government agencies could provide resources to women and people of color, such as space to test their products or funding to get their businesses started. In some states, such as California and Massachusetts, entrepreneurs can access social equity initiatives to assist communities disproportionately impacted by cannabis criminalization.

“This starts at the policy level,” she tells Bustle. “The victims of the war on drugs are stakeholders in this industry, too. And we absolutely owe it to them to not leave them behind.”

Drummer adds that it’s not just the cannabis industry that’s under-representing women, and especially women of color — it’s the culinary industry as well. She hopes that culinary schools will institute infusion curricula for aspiring chefs to learn, but she also knows she serves as an example for others. She says she gets inquiries from young women about how to enter the cannabis culinary space every day, and she’s never quite sure how to respond.

“My personality is just to kind of dig in and not necessarily wait for an answer, but to be the answer,” she says. But Drummer acknowledges that she has a role to play in making the space more diverse, because she wants to be a part of that change.

“I have to show up for other young girls that look like me and want to do this thing,” she says. “That’s my purpose.”