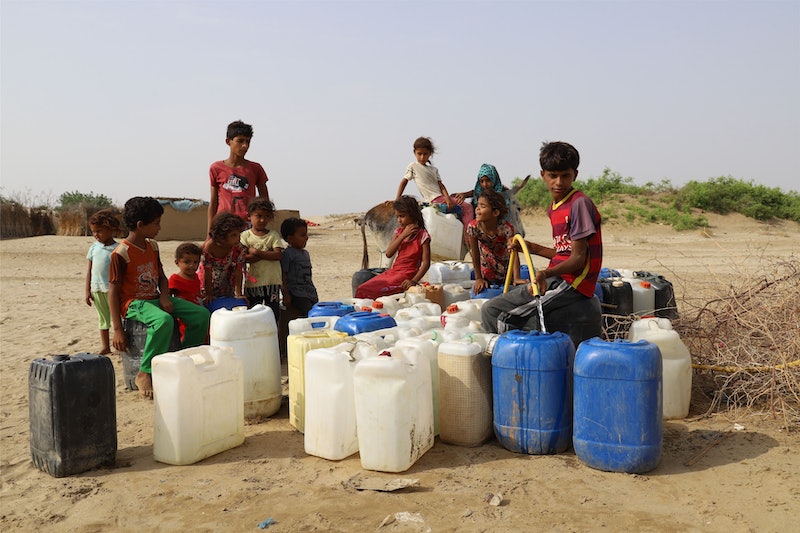 Since 2015, Yemen has been in the midst of a civil war. Described by Oxfam as one of world’s “gravest humanitarian crises,” the war has claimed more than 12,000 civilian lives and a further four million have been displaced. Approximately 80% of the country’s population is in need of emergency aid – the greatest number in any country in the world. Below are the top line facts you should be aware of, as well as suggestions of how you can help the people of Yemen.

What Caused The Civil War In Yemen?

The war was initially ignited following the end of the Arab Spring, which saw president Ali Abdullah Saleh hand over power to his deputy, Abdrabbuh Mansour Hadi in 2011, per BBC News. Hadi struggled with a “variety of problems,” the BBC writes, leading Yemen’s Zaidi Shia Muslim minority (also known as the Houthis) loyal to Saleh to effectively drive Hadi out of the country in March 2015 and take power.

Since then, neighbouring Saudi Arabia and other Sunni Arab states have begun an air campaign aimed at defeating the Houthis, which has received “logistical and intelligence support from the U.S., UK, and France,” the BBC reports. The conflict escalated further in January 2020 after a suspected Houthi rebel missile attack on Yemini government forces killed 116 people, per the Guardian.

At the time of writing (August 2020), the country is still engulfed by this civil war.

How is Yemen Dealing With Coronavirus During This Conflict?

Yemen’s health infrastructure has been severely affected by the ongoing conflict. Out of the 3,500 medical facilities, only half are running, leaving “almost 20 million people lack of access to adequate healthcare,” per BBC News. As a result, Yemen has become susceptible to the largest cholera outbreak “in epidemiologically recorded history,” its people are suffering from malnutrition and now, on top of that, they are dealing with the coronavirus crisis.

“It’s quite difficult to know the real extent of [COVID-19 in Yemen] because there’s not been enough testing to be significant,” Claire Ha-Duong, head of the aid group Doctors Without Borders mission in Yemen, told CBS News. “The problem is that, in private hospitals, [COVID-19] patients are refused and there is very little capacity for other patients in other hospitals.”

On top of this, equipment like masks, gloves, ventilators and other essential supplies to treat coronavirus are severely lacking, per UNICEF. The humanitarian charity has shipped “more than 33,000 N95 respirators, 33,000 face shields, and 18,000 gowns” for frontline workers since early June, but it's not enough.

What Can You Do To Help The People Of Yemen?

In June, international donors pledged $1.35 billion in aid during a virtual conference held by the UN, but as CBS News notes this “isn’t nearly enough” to support the people of Yemen — especially since it's “far short of the $2.41 billion target and only half of what was raised last year.”

To provide food alone to the Yemeni people, the United Nations World Food Programme (UNWP) estimates that “over $700 million is needed by the end of this year to keep the Yemeni people from falling into acute hunger,” a statement sent to Bustle reads.

There are a number of ways to support and help the people of Yemen:

For more information on charities, fundraisers, and resources on the Yemen crisis, you can visit this card site put together by activist @wipbee on Instagram.

More like this
Adele’s Boyfriend Was “Livid” Over This Fan Interaction At The Singer’s Show
By Sophie McEvoy
'Waterloo Road' Is Back, With More Than A Few Familiar Faces
By Sam Ramsden and Vivian Iroanya
Mollie King & Stuart Broad Just Shared The First Pic Of Their Baby
By Sophie McEvoy
The David Beckham Qatar Controversy, Explained
By Sophie McEvoy
Get The Very Best Of Bustle/UK